Sharks and lost hope: 2 women rescued after 5 months at sea 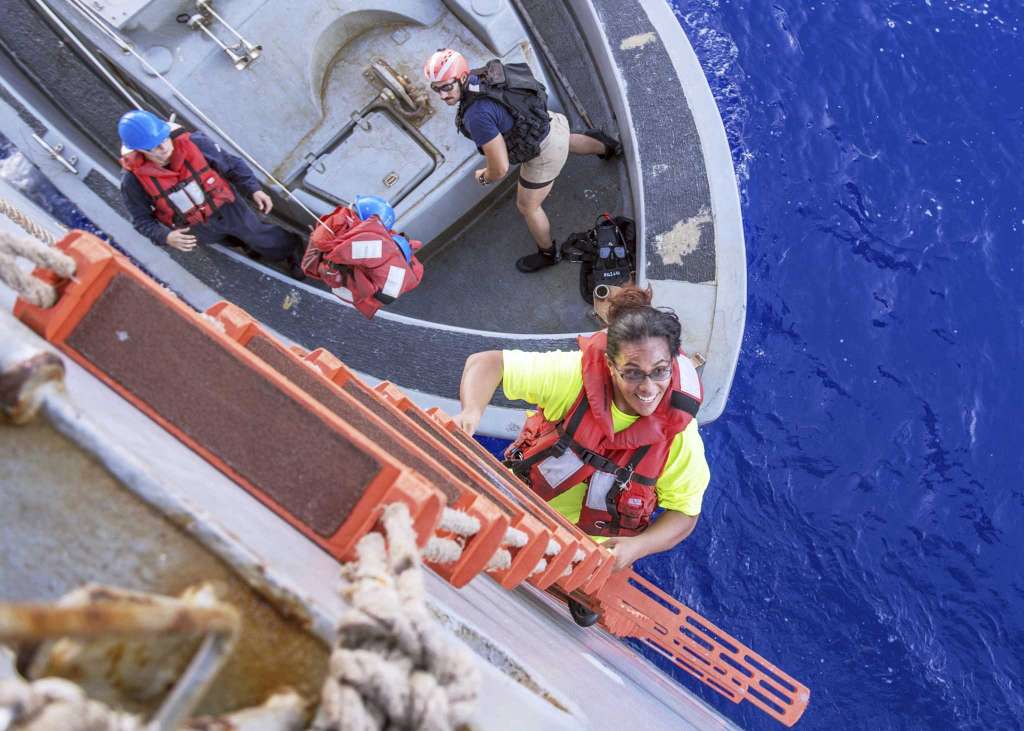 HONOLULU (AP) — Their engine was crippled, their mast was damaged and things went downhill from there for two women who set out to sail the 2,700 miles from Hawaii to Tahiti.

As their 50-foot sailboat drifted helplessly in the middle of the Pacific for months, their water purifier conked out, sharks started ramming their vessel, their food ran low and their distress calls and signal flares went unanswered day after day.

Some nights they went to sleep wondering if they would live to see the sun rise.

Then their fortunes changed Tuesday: Five and a half months after Jennifer Appel and Tasha Fuiava embarked on a journey that might normally take about three weeks, a Taiwanese fishing vessel spotted their boat 900 miles off Japan and thousands of miles in the wrong direction from Tahiti.

The Navy sent the USS Ashland to their rescue. 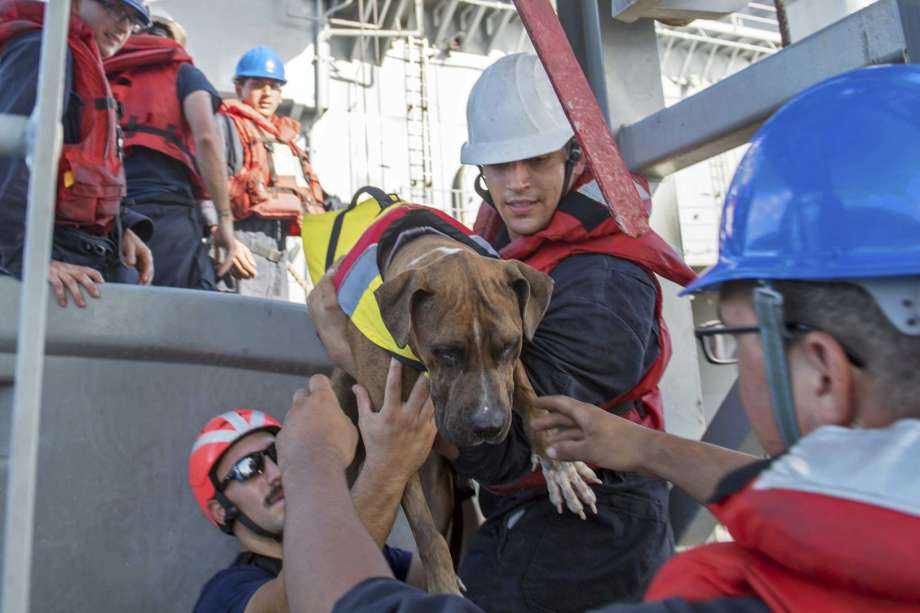 "I had tears in my eyes," said Appel, the Sea Nymph's 48-year-old captain, who blew kisses to her rescuers as they pulled alongside.

She and Fuiava quickly clambered aboard, followed by their dogs Zeus and Valentine, who were hoisted up.

"It was actually quite mind-blowing and incredibly humbling," she told reporters during a conference call from the ship.

All four looked remarkably fit, and Appel credited that to veteran sailors who had warned them to prepare well for the voyage. They had packed enough food that could last for a year, mostly dried goods like oatmeal and pasta.

"They said pack every square inch of your boat with food, and if you think you need a month, pack six months, because you have no idea what could possibly happen out there," Appel said. "And the sailors in Honolulu really gave us good advice. We're here."

Appel, who has been sailing the Hawaiian islands for a decade, said she had planned this voyage for more than two years. She and Fuiava were to spend about 18 days getting to Tahiti, then another six months or so cruising the thousands of small islands that dot the South Pacific before returning to Hawaii.

But she acknowledged that perhaps she and Fuiava, a novice at sea, weren't as ready for the crossing as they could have been.

"I had no idea what I was getting myself into," she said. "When I asked Natasha, I told her I have no idea what's going to happen out there and she said, 'That's OK, I've never sailed.'" 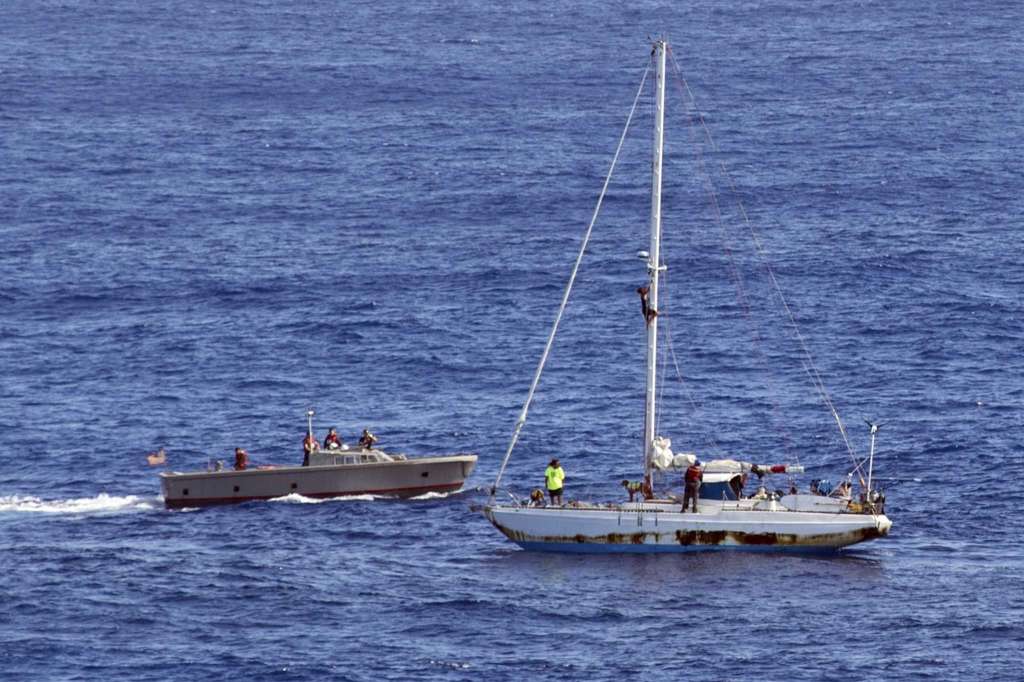 The two set sail on May 3 and ran into trouble almost immediately, Appel said, hitting a storm that pounded their vessel with 50 to 70 mph winds for three days as they traveled the Hawaiian islands. The boat seemed to hold up fairly well through that, however, so they decided to continue.

Their engine went out toward the end of the month. They thought they could continue on with just their sails, but the rigging on the 57-foot mast was damaged and they were unable to make any headway.

So they drifted, sending out distress signals every day for 98 days straight. They said they also tried without success to hail a number of ships and fired off 10 signal flares. One of their cellphones had been washed overboard early in the voyage, and they were out of cell range anyway.

One night, a group of tiger sharks began attacking the vessel, and the next morning, a shark returned and rammed the boat again, Appel said, adding, "We were just incredibly lucky that our hull was strong enough to withstand the onslaught."

As the months passed, the pair discovered they were going through their food much faster than they had anticipated. Ninety percent was gone by the time they were rescued, some of it having been fed to their dogs after their pet food supply ran out.

"The dogs turned out to really like human food," Appel said.

Meanwhile, loved ones had no idea where they were. Appel's mother said she contacted the Coast Guard when she hadn't heard from her daughter a week and a half into the voyage.

Still, as the months passed, Joyce Appel said she never lost hope that the pair would be found.

"She is very resourceful and she's curious, and as things break she tries to repair them. She doesn't sit and wait for the repairman to get there," said Joyce Appel, 75, who lives in Houston. "So I knew the same thing would be true of the boat."

She finally got a call from her daughter early Thursday.

Despite the ordeal, the pair said there were positive moments, such as when they fixed their broken water purifier and used their long days adrift to learn more about the sea and the weather.

"You may as well use the time you have to do something beneficial," Fuiava said.

Although the Navy declared the Sea Nymph no longer seaworthy, Appel said she hopes to eventually recover it and perhaps take it out again.

"Well, you got to die sometime," Appel said. "You may as well be doing something you enjoy when you're doing it, right?"