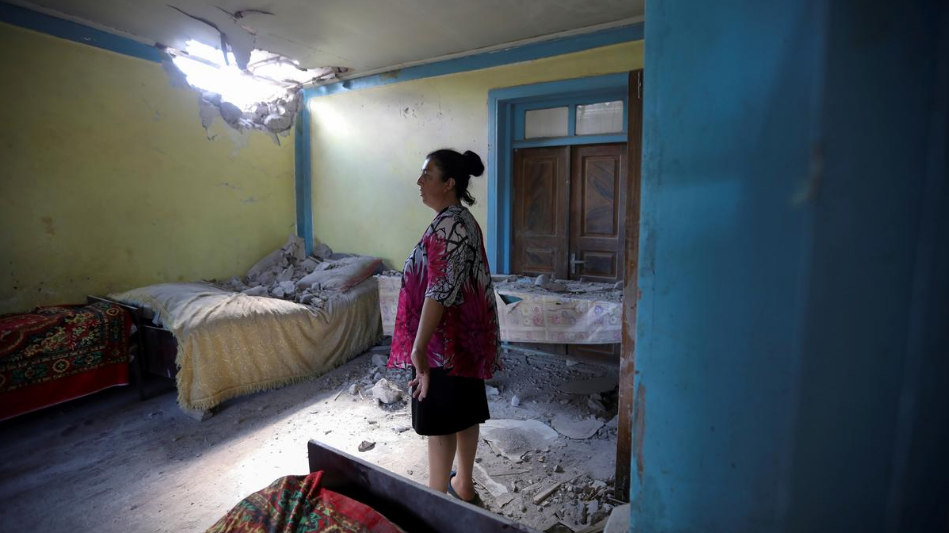 A woman stays in a house, which locals said was damaged during a recent shelling by Armenia's forces, in armed clashes on the border between Azerbaijan and Armenia, July 15, 2020. (File photo: Agencies)

Azerbaijan and Armenia accused each other of shelling military positions and villages on Thursday, breaking a day of ceasefire in border clashes between the two former Soviet republics.

In the clashes on Sunday and Monday, four Azerbaijani soldiers were killed, and at least two Armenian police officers were wounded, according to the defense authorities of the two countries.

International concern is heightened because of the threat to stability in a region serving as a corridor for pipelines taking oil and gas from the Caspian Sea to global markets.

The secretary-general called for an immediate end to the fighting and called on all involved to take immediate steps to de-escalate the situation and refrain from provocative rhetoric, Dujarric said in a statement.

Guterres has taken note of Monday's statement by France, Russia and the United States, co-chairs of the Organization for Security and Cooperation in Europe Minsk Group, and reiterated his full support for their efforts to address this dangerous situation and search for a peaceful and negotiated settlement to the long-standing Nagorno-Karabakh conflict, Dujarric said.

Both countries' defense ministries accused the other of firing mortars from before dawn and encroaching on the territory, though there were no casualties reported.

It was "the first serious violation of the fragile ceasefire established yesterday," the Armenian ministry said.

The neighbors have long been in conflict over Azerbaijan's breakaway, mainly ethnic Armenian region of Nagorno-Karabakh. But the latest flareups are around the Tavush region in northeast Armenia, some 300 kilometers (190 miles) from the enclave.

Ethnic Armenians in Nagorno-Karabakh declared independence during a conflict that broke out as the Soviet Union collapsed in 1991. Though a ceasefire was agreed in 1994, Azerbaijan and Armenia frequently accuse each other of attacks around Nagorno-Karabakh and along the separate Azeri-Armenian frontier.