Syrian children stand at the blood stained scene of a reported government shelling that killed schoolchildren in the rebel-held besieged town of Jisreen, east of the capital Damascus, on October 31, 2017 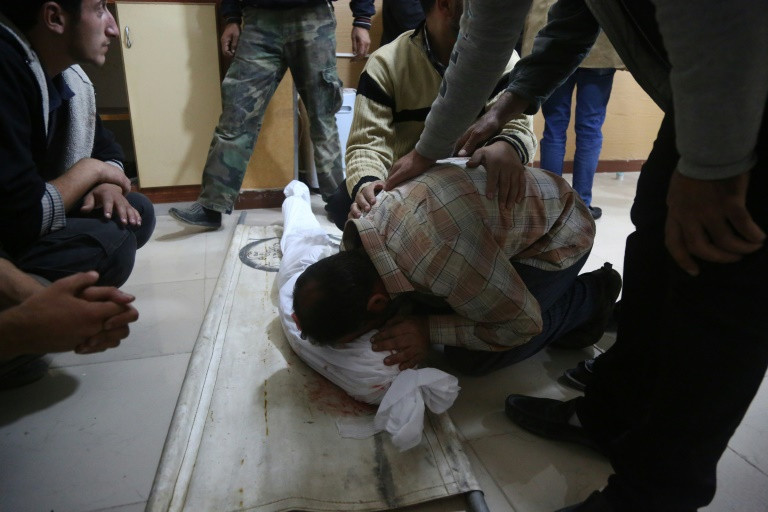 A Syrian man mourns over the body of a child at a makeshift hospital following the reported government shelling of a school in the rebel-held besieged town of Jisreen, east of the capital Damascus, on October 31, 2017

A Syrian child lies on a bed at a makeshift hospital following the reported government shelling of a school in the rebel-held besieged town of Jisreen, east of the capital Damascus, on October 31, 2017 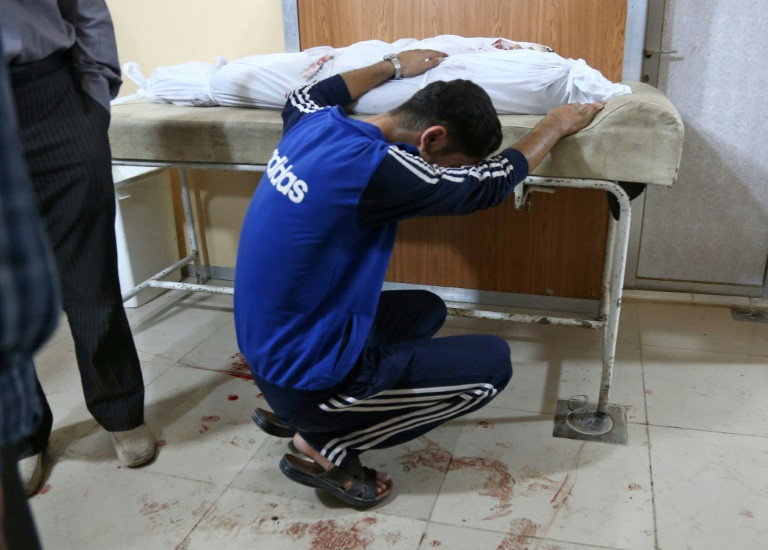 A Syrian man mourns next to the bodies of schoolchildren at a makeshift hospital after a reported government shelling in the rebel-held besieged town of Jisreen on October 31, 2017 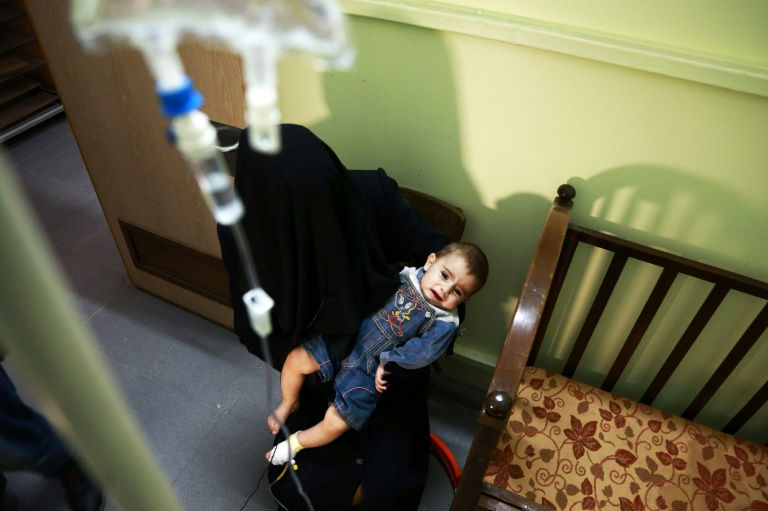 A mother holds her son who is suffering from dehydration and malnutrition at a hospital in the rebel-held town of Kfar Batna in the Eastern Ghouta region on the outskirts of the capital Damascus on October 25, 2016 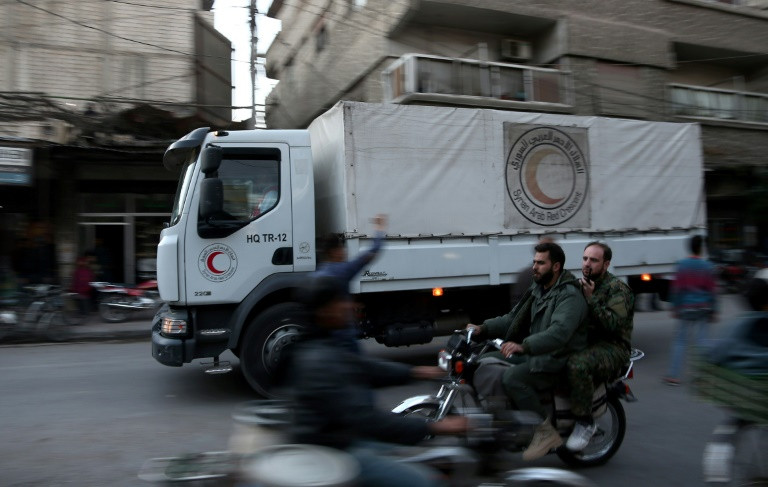 A Syrian Red Crescent truck arrives with humanitarian aid parcels to be distributed to residents and hospitals in the besieged rebel-held region of Eastern Ghouta outside Damascus on October 30, 2017

At least six schoolchildren were among 11 people killed in Syrian regime shelling Tuesday in Eastern Ghouta, a war monitor said, despite a ceasefire in the hunger-hit rebel enclave.

The bombardment of the rebel-held pocket outside Damascus came as a new round of peace talks to end Syria's six-year war entered a second day in the Kazakh capital Astana.

Government fire on the besieged region has been on the rise in the past week, and the Britain-based Syrian Observatory for Human Rights monitor said the latest shelling hit a school in the town of Jisreen.

"A shell fired by regime troops hit the entrance of a school in Jisreen just as children were leaving it," said Observatory director Rami Abdel Rahman.

A medical source at the town hospital confirmed the death toll and said another 25 people were wounded.

The Observatory said earlier that four children had died, but two later succumbed to their wounds in hospital.

An AFP photographer at the medical facility saw the bodies of four children, wrapped in blood-stained white shrouds.

Several wounded children lay or sat in shock on hospital beds, including one with severed legs.

A man cried out after learning his son had died, as others around him tried to comfort him.

Small blue school bags and a tiny pair of shoes lay in a corner, drenched in blood.

Outside the primary school, children stared at the pools of blood staining the concrete ground.

"I was coming out of school and was about to turn into a side street when the shell hit. There were dead people, wounded people," one child told AFP.

The regime on July 22 announced a ceasefire with rebels in the besieged area, which has been included in a so-called "de-escalation zone" agreed by Turkey, Russia and Iran.

An AFP journalist at a morgue saw rescue volunteers and young men slip the bodies of a father and his son into white plastic bags.

In the town of Harasta, shelling also hit near a school as pupils were leaving it, wounding 10 people including five children.

On Sunday, 11 civilians including a journalist for pro-opposition television were killed in Eastern Ghouta.

The shelling comes as Eastern Ghouta, where an estimated 400,000 people live, faces a mounting humanitarian crisis.

The region was once a prime agricultural region famed for its orchards.

But the rebel stronghold has been under a tight government siege since 2013, causing shortages of food and medicine, as well as price hikes for the local and smuggled supplies available.

Basic services are virtually non-existent, with electricity produced only by generators and water often dirty and a vector for disease.

More than 330,000 people have been killed in Syria since the conflict began in March 2011 with anti-government protests.

The conflict has since spiralled into a complex war involving world powers and Islamic State group jihadists, who took over large swathes of the country in 2014.

But the jihadists have since lost most of the territory they controlled, and were ousted two weeks ago from their de facto Syrian capital of Raqa.

They face twin offensives in the eastern oil-rich province of Deir Ezzor, from the regime and the US-backed Kurdish-Arab Syrian Democratic Forces.