A chance encounter with a former Marine beset by delusions of child sex trafficking ultimately led to the massacre of four members of a Florida family, including a mother holding her baby boy, a sheriff said Thursday. 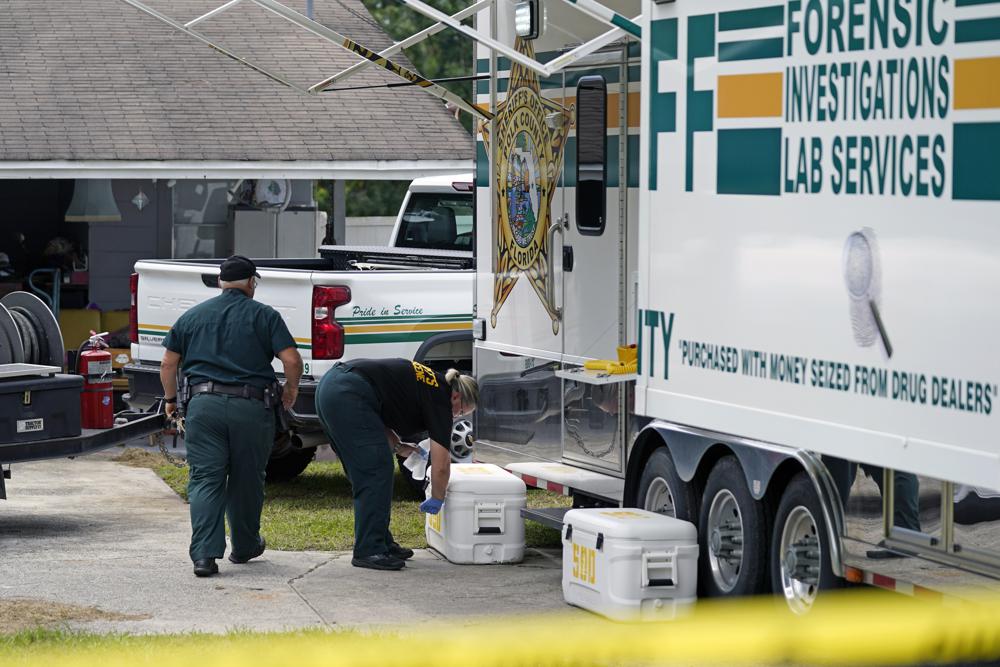 Officers from the Polk County Sheriff Department work outside Tuesday, Sept. 7, 2021, in Lakeland, Fla., at the home where a family of four was shot and killed. (Photo: AP)

Bryan Riley, who faces murder and other charges in Sunday's killings, stopped by the slain family's Lakeland home briefly the day before after going to a nearby friend's house to pick up a first aid kit, Polk County Sheriff Grady Judd said at a news conference.

Riley had told acquaintances he was headed for Hurricane Ida relief work and the friend offered the kit for the purported trip. A short distance away, Riley saw Justice Gleason mowing his lawn with his 11-year-old daughter in the yard, Judd said.

That provided the trigger that led to the slayings, Judd said: Riley saw the girl, believing she was an imaginary child named Amber who was suicidal and being held by a supposed sex trafficking ring that God had told him to confront. In fact, no one named Amber lived at the home and Gleason repeatedly told Riley that before asking him to leave their initial encounter.

"This was all fiction, all made up by him," Judd said. "There were no victims of sex trafficking in that house."

Judd provided numerous new details about Sunday's slayings, including that Riley, wearing body armor, had three weapons with him and fired at least 100 shots in the main home and a smaller one in back where Catherine Delgado, 62, was the first to be killed.

Law enforcement officers fired about 60 shots in a gun battle that left Riley with a gunshot wound to the abdomen that is not life-threatening, Judd said. Riley surrendered after that.

"He was a coward. An absolute coward. He looks like a man, but he's not a man. He's a sniveling coward," Judd told reporters.

The 11-year-old girl survived the attack despite being shot multiple times and has undergone four surgeries so far, Judd said.

She told investigators that her family huddled in a bathroom after Riley shot his way into the home, killed their dog and then attacked everyone hiding there. Riley repeatedly asked about Amber and then counted down — three, two, one — before shooting her and eventually leaving her for dead, she told authorities.

Judd said the girl played dead and was able to survive despite wounds to her legs, hand and abdomen.

The victims are Gleason, 40; his 33-year-old girlfriend, Theresa Lanham; their baby boy, Jody, who was born in May; and Delgado, who was Lanham's mother and owned the property. They possessed no weapons.

Riley, 33, served as a Marine in Iraq and Afghanistan and was working as a security guard in the Lakeland area, including at a church. After that recent job, his girlfriend of four years told investigators, Riley began talking about communication with God but not about violence.

"No one has told us they knew anything about violence," Judd said.

Riley is recovering from his gunshot wound and is being held without bond on murder, attempted murder and other charges. An Oct. 12 arraignment date is set for him to enter a plea. Judd said he has already confessed to the crimes, which could bring the death penalty.

Investigators also have not yet verified Riley's post-arrest statement to officers that he was high on methamphetamines at the time of the shooting. No evidence of that drug has been found, although Judd said illegal steroids where found at Riley's home in Brandon and hospital blood tests could reveal more.

"This investigation is not near over. This is going to go on for weeks and weeks and weeks," the sheriff said. "This mass murder is exceptionally horrible."