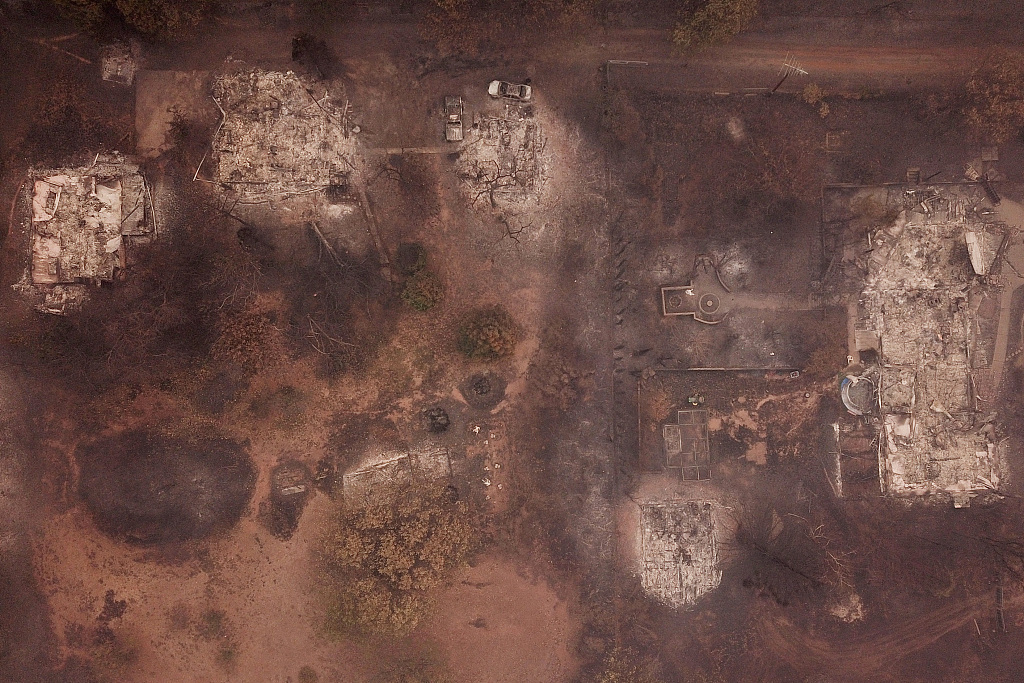 At least 63 are now dead from a Northern California wildfire, and officials say they have a missing persons list with 631 names on it in an ever-evolving accounting of the missing after the nation’s deadliest wildfire in a century.

Officials were scrambling to pinpoint everyone’s whereabouts, and Butte County Sheriff Kory Honea said Thursday that the high number of missing people probably included some who fled the blaze and didn’t realize they had been reported missing.

Authorities were making the list public so people could see if they were on it and let authorities know they were safe, Honea said.

“The chaos that we were dealing with was extraordinary,” he said of the early crisis hours last week. “Now we’re trying to go back out and make sure that we’re accounting for everyone.”

Honea released the list as others questioned the chaotic evacuations of Nov. 8. 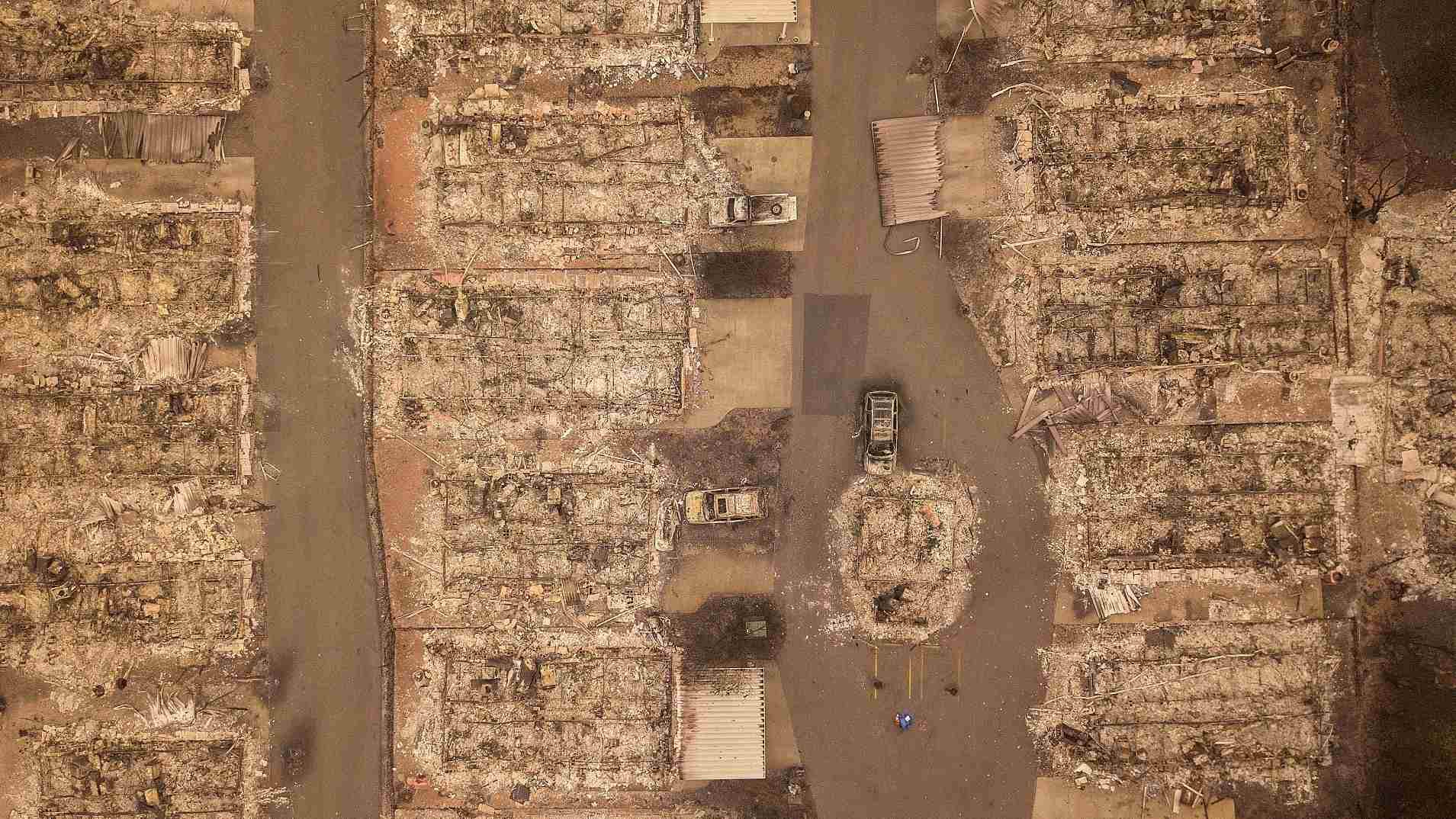 A burned neighborhood in Paradise with charred cars, melted tires and blackened buildings is seen from the air on November 15, 2018. Never did the residents of the town in Butte County in California think that a fire would swallow their community whole.

Ten years ago, as two wildfires advanced on Paradise, residents jumped into their vehicles to flee and got stuck in gridlock. That led authorities to devise a staggered evacuation plan — one that they used when fire came again last week.

But Paradise’s carefully laid plans quickly devolved into a panicked exodus last week. Some survivors said that by the time they got warnings, the flames were already extremely close, and they barely escaped with their lives. Others said they received no warnings at all.

Now authorities are facing questions of whether they took the right approach.

It’s also a lesson for other communities across the West that could be threatened as climate change and overgrown forests contribute to longer, more destructive fire seasons .

Just over an hour after the first evacuation order was issued at 8 a.m., she said, neighbors came to her door to say: “You have to get out of here.”

Shari Bernacett, who with her husband managed a mobile home park in Paradise where they also lived, received a text ordering an evacuation. “Within minutes the flames were on top of us,” she said.

Bernacett packed two duffel bags while her husband and another neighbor knocked on doors, yelling for people to get out. The couple grabbed their dog and drove through 12-foot (4-meter) flames to escape. 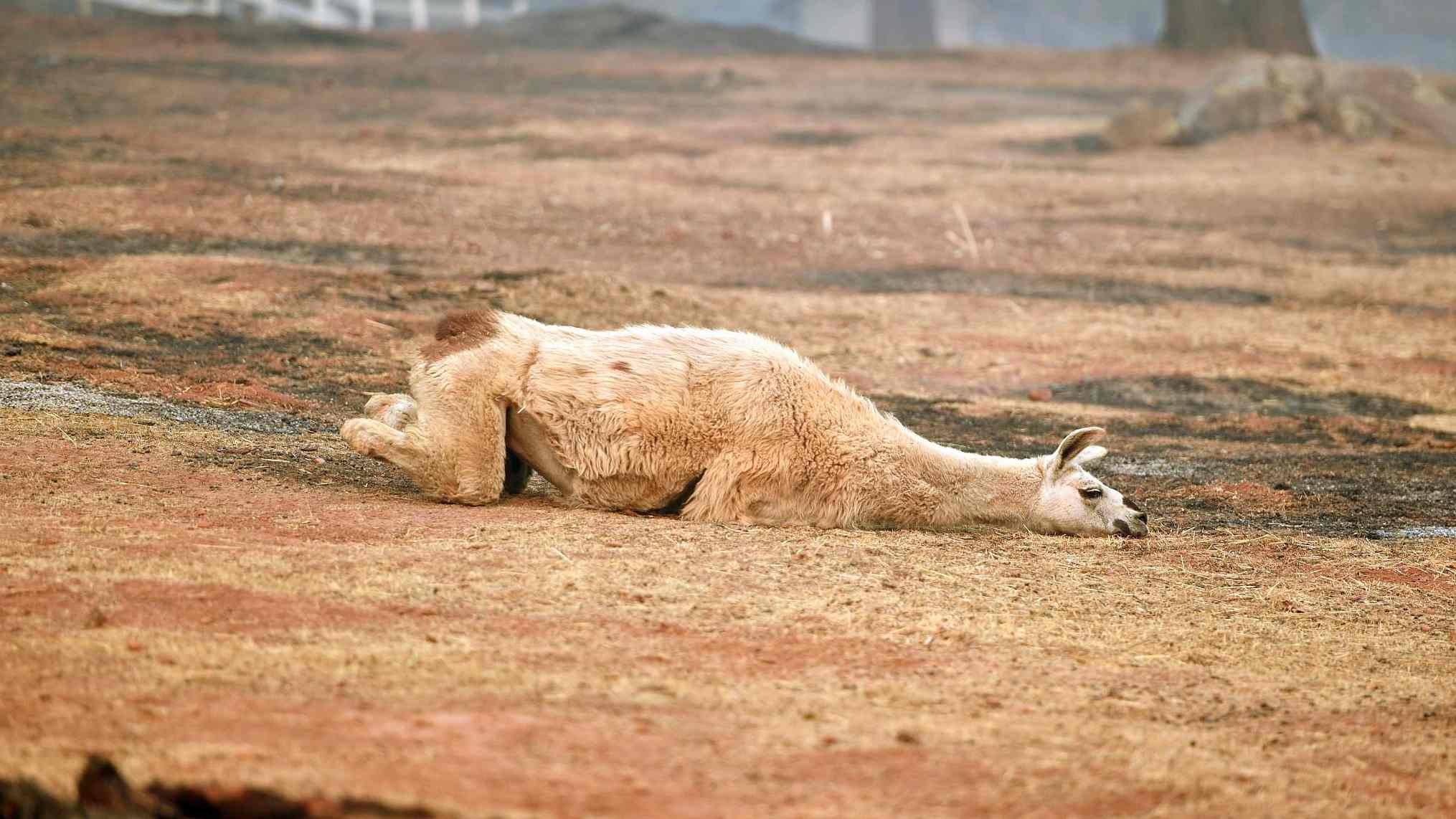 The toll in the deadliest wildfires in recent California history climbed to 63 late Thursday, with more than 600 people still officially listed as missing. As investigators try to determine what started the devastating wildfires, tens of thousands of people across the state have been forced to flee their homes.

In the aftermath of the disaster, survivors said authorities need to devise a plan to reach residents who can’t get a cellphone signal in the hilly terrain or don’t have cellphones at all.

In his defense, Honea said evacuation orders were issued through 5,227 emails, 25,643 phone calls and 5,445 texts, in addition to social media and the use of loudspeakers. As cellphone service went down, authorities went into neighborhoods with bullhorns to tell people to leave, and that effort saved lives.

Honea said he was too busy with the emergency and the recovery of human remains to analyze how the evacuation went. But he said it was a big, chaotic, fast-moving situation, and there weren’t enough law enforcement officers to go out and warn everyone.

“The fact that we have thousands and thousands of people in shelters would clearly indicate that we were able to notify a significant number of people,” the sheriff said.

Some evacuees were staying in tents and cars at a Walmart parking lot and in a nearby field in Chico, though volunteers are planning to close the makeshift shelter by Sunday.

A Sunday closure “gives us enough time to maybe figure something out,” said Mike Robertson, an evacuee who arrived there on Monday with his wife and two daughters.

President Donald Trump plans to travel to California on Saturday to visit victims of the wildfires burning at both ends of the state. Trump is unpopular in much of Democratic-leaning California but not in Butte County, which he carried by 4 percentage points over Hillary Clinton in the 2016 election.

The Paradise fire once again underscored shortcomings in warning systems. 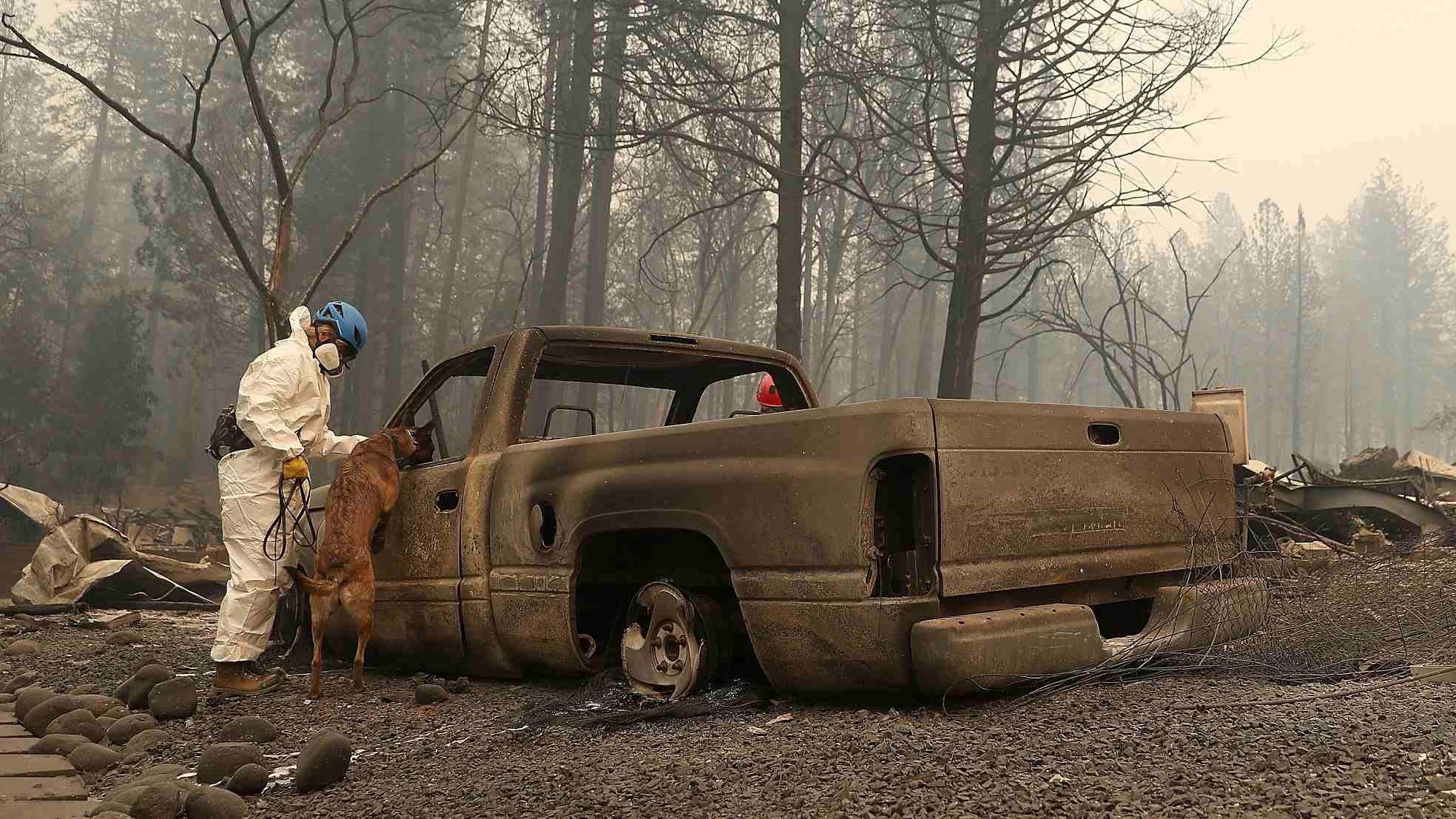 The number of acres burned, including Camp Fire in Northern California and the Hill and Woolsey fires in Southern California, is already higher than the total burned in wildfires last year, ratings firm A.M. Best Co. wrote on Tuesday.

Gov. Jerry Brown signed a bill in September requiring the development of statewide guidelines for Amber Alert-like warnings. A few Northern California communities are moving to install sirens after wine country residents complained they didn’t receive warnings to evacuate ahead of a deadly wildfire in October 2017 that destroyed 5,300 homes.

In 2008, the pair of wildfires that menaced Paradise destroyed 130 homes. No one was seriously hurt, but the chaos highlighted the need for a plan.

Paradise sits on a ridge between two higher hills, with only one main exit out of town. The best solution seemed to be to order evacuations in phases, so people didn’t get trapped.

“Gridlock is always the biggest concern,” said William Stewart, a forestry professor at the University of California, Berkeley.

Authorities developed an evacuation plan that split the town of 27,000 into zones and called for a staggered exodus. Paradise even conducted a mock evacuation during a morning commute, turning the main thoroughfare into a one-way street out of town.

Last week, when a wind-whipped fire bore down on the town, the sheriff’s department attempted an orderly, phased evacuation, instead of blasting a cellphone alert over an entire area.

Phil John, chairman of the Paradise Ridge Fire Safe Council, defended the evacuation plan he helped develop. John said that the wildfire this time was exceptionally fast-moving and hot, and that no plan was going to work perfectly. 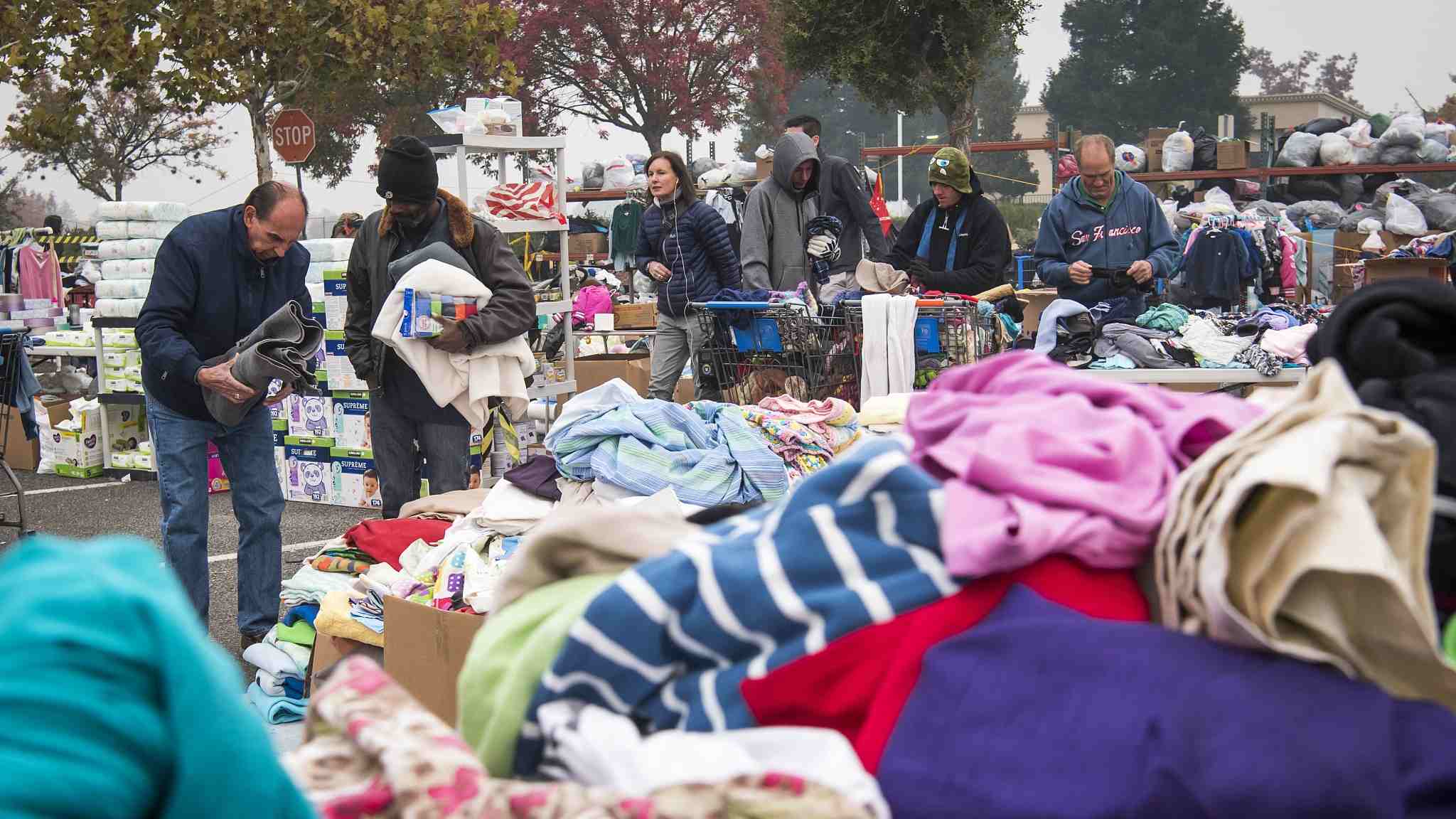 Camp Fire evacuees look through donated items at a parking lot in Chico, California, on Thursday.

When the fire reached the eastern edge of Paradise, six zones were ordered to clear out about 8 a.m. But almost simultaneously, the gusting winds were carrying embers the size of dinner plates across town, and structures were catching fire throughout the city. Less than an hour later, the entire town was ordered evacuated.

“It didn’t work perfectly,” John said Thursday. “But no one could plan for a fire like that.”

Likewise, Stewart, the forestry professor, said the wildfire that hit Paradise disrupted the orderly evacuation plan because it “was moving too fast. All hell broke loose.”

Satellite images show half the town on fire less than two hours after the first evacuation order.

Stewart said experts continue to debate how best to issue evacuation orders, and no ideal solution has been found.

At the other end of the state, meanwhile, crews continued to gain ground against a blaze of more than 153 square miles (396 square kilometers) that destroyed over 500 structures in Malibu and other Southern California communities. At least three deaths were reported.