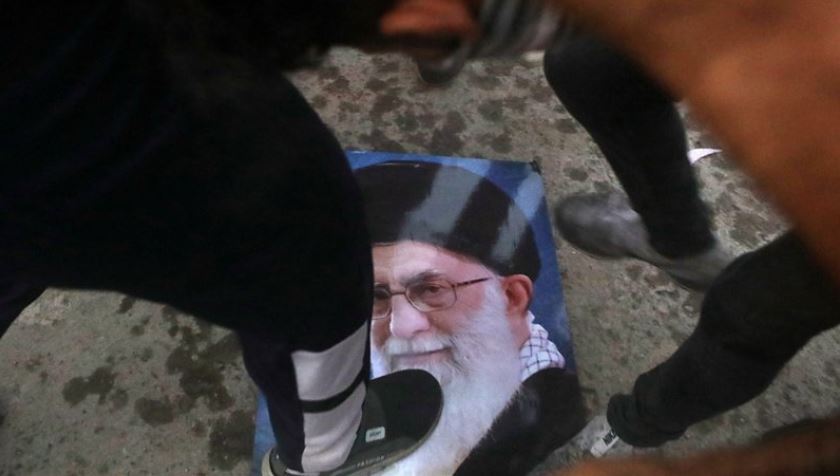 A local military commander of an alliance of powerful Shiite militias, many of them backed by Iran, vowed a response Saturday to weeklong protests that have turned violent in the southern city of Basra, raising the specter of further escalation in the oil-rich southern region.

“We will have a response to those who are carrying out acts of arson and sabotage,” said the commander, known as Abu Yasser al-Jaafari, at a news conference held in the city.

Angry protesters have torched government buildings and offices belonging to powerful Iranian-backed militias in the weeklong protests demanding improved services and an end to corruption. On Friday night, protesters shouting anti-Iranian slogans including “Iran, out, out!” stormed the Iranian consulate and set it on fire.

They also burned an Iranian flag and trampled over a portrait of Iran’s Supreme Leader Ayatollah Ali Khamenei.

Al-Jaafari said the lack of response thus far should not be taken as a sign of weakness. He spoke at the city’s presidential palaces compound, where Shiite paramilitary troops are stationed.

The government-sanctioned alliance of Shiite militias is known as the “Popular Mobilization Forces” or “Hashed” in Arabic. Many of the militias are backed by Iran.

The city of Basra, home to some of the largest oil fields in Iraq, has been the epicenter of the most serious demonstrations to shake the area in years, demanding an end to endemic corruption, soaring joblessness and crumbling infrastructure.

This week, they turned their rage on neighboring Iran, blaming its outsized influence in Iraq’s political affairs for their misery and calling for radical change.

“We have no work, no money. Something needs to change,” said 18-year-old Mustafa Diaa, a currently jobless construction worker from Basra’s Tannouma district who said he has been taking part in the protests daily.

Diaa took part in torching the provincial government building two days earlier and returned to the scene on Saturday. He said he does not regret it and would do so again until something gives.

“They should change the government, provide job opportunities and fix the water. I’m not scared,” he said.

On Saturday, assailants fired three Katyusha rockets at Iraq’s Basra airport, which also houses the U.S. consulate, adding to the tensions. An airport official said the attack occurred at about 8 a.m. local time and did not cause casualties or disrupt flights in or out of the city. He spoke on condition of anonymity, citing security concerns. There was no immediate claim of responsibility for the attack.

Iraq’s parliament held an emergency session Saturday to discuss the unrest in Basra.

Iran’s Foreign Ministry spokesman, Bahram Ghasemi, condemned the attack on the Iranian consulate, which he said caused significant damage to the building. He called for maximum punishment for the assailants.

The State Department criticized the attack, without explicitly mentioning Iran. “The United States condemns violence against diplomats, including that which occurred today in Basra,” it said in a statement.

Elsewhere in the city, protesters tried to attack the headquarters of the Iran-backed Assaib Ahl Al-Haq Shiite militia and the guards stationed there opened fire. Angry protesters marched to the city’s presidential palaces compound, where Shiite paramilitary troops are stationed, and tried to breach it. At least three cars driven by the troops ploughed into the protesters, killing one and wounding four others, according to a health official who spoke on condition of anonymity because he was not authorized to speak to media.

On Saturday, an Associated Press reporter touring the city observed that traffic was normal and shops were open. Police and security forces were conspicuously absent. The two-story consulate was partially burned. An Iraqi flag was placed at the entrance to the consulate after the Iranian one was torn down and set ablaze. Sprayed in red on the concrete wall of the consulate were the words: “Down with Iran, down with the militias, the revolution will continue.”

A lone, unarmed policeman sat on a chair at the entrance, underneath the slogan.

The provincial government building in the center of Basra was completely torched. A banner on one side of the building read in Arabic: “No to the militias, your militias under our feet.”

At least 15 protesters have died in clashes with security forces since the beginning of the month, health officials said. The violence has forced the closure of the vital Um Qasr port on the Persian Gulf.

A provincial official with state-run Iraqi Ports Co. said authorities closed the vital Um Qasr port on the Persian Gulf since late Wednesday, fearing sabotage. The official, who spoke on condition of anonymity because he was not authorized to release information, wouldn’t say when operations will resume.

Basra, once known as the “Venice of the East” because of its freshwater canals, has been hit by an acute water crisis and crippling electricity shortages this summer amid surging temperatures. Adding to the outrage is a water pollution crisis and salt water seeping into tap water that is making residents sick. Two hospital officials told the AP that around 35,000 residents have been hospitalized as a result of water pollution in the past month.

The water is reportedly so polluted it cannot even be used for cooking or washing. The protests began in June, tapered off, but then restarted Monday following a surge in water poisoning cases.

Iraq’s government has scrambled to meet the growing demand for public services and jobs, but has been hindered by years of endemic corruption and a financial crisis fueled by diminished oil revenues and the costly war against the Islamic State group.

Basra’s streets are filled with pictures of young men from the Iran-backed Shiite militias who were killed fighting against the Islamic State group in the past few years — a war that allowed powerful Iran-backed militias space to flourish and gain strength in Iraq.

Many residents of the predominantly Shiite city now accuse Iranian-backed political parties of interfering with Iraqi politics and hold them responsible for the Shiite militias based in their city, which they blame for mismanagement and profiteering at their expense.

Prime Minister Haider al-Abadi has ordered an investigation into the violence, which showed no sign of abating.

The unrest in the south comes amid a political crisis in Baghdad, adding to overall tensions in the country.

The newly elected parliament earlier this week held its first session since the national elections in May, but the session was adjourned amid disagreements as two blocs, both claiming to hold the most seats, vied for the right to form a new government.