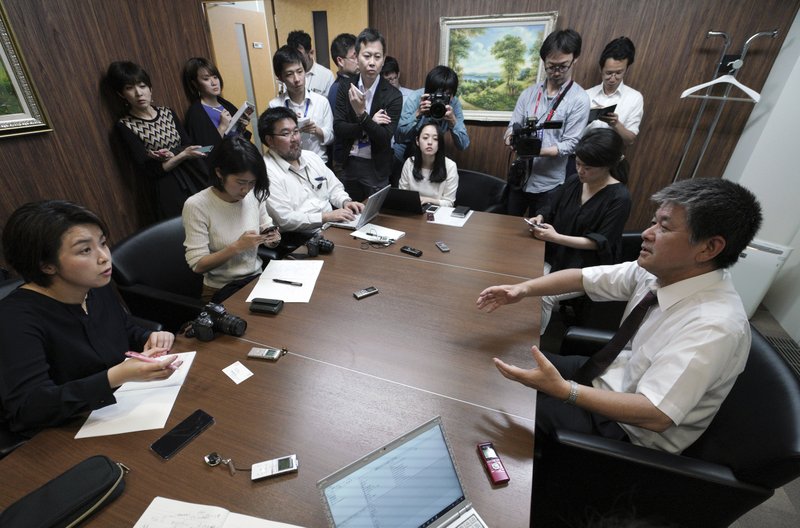 Michio Yube, right, director and general manager at the Kikuka Sankyo Co., speaks to media after one of their ships, the Kokuka Courageous, was attacked near the Strait of Hormuz on June 13, 2019. (AP: Photo)

Governments and maritime agencies urged an abundance of caution Thursday for ships operating in the Persian Gulf region after two oil tankers were damaged in suspected attacks near the strategic Strait of Hormuz.

Though details of the suspected attack on the ships in the Gulf of Oman of the coast of Iran were still vague, the incident comes amid growing friction between Washington and Tehran in an area already fraught with tension.

“The shipping industry views this as an escalation of the situation, and we are just about as close to a conflict without there being an actual armed conflict, so the tensions are very high,” said Jakob P. Larsen, the head of maritime security for the shipping association BIMCO, which represents some 60 percent of the world’s merchant fleet, including owners of the two damaged tankers.

German Foreign Minister Heiko Maas urged de-escalation from all sides in the Gulf, saying that even though the facts are still unclear, the incident is “extremely disturbing.”

“It’s clear that the sabotage of ships, or attacks on trade ships are a threat to open trade routes and the central right of freedom of the seas,” he told reporters in Berlin. “And in the current situation, they are also a threat to peace.”

The vessels involved have been identified as the MT Front Altair, a Marshall Islands-flagged crude oil tanker owned by Norway-based Frontline, and Kokuka Courageous, managed by a Singapore company.

Norway’s Foreign Ministry said it “is concerned about the situation in Oman Bay” and “this type of incident further increases tension in the region.”

“Although there is no full clarity in the background for these attacks, the Norwegian Maritime Directorate’s advice is to keep a good distance to Iranian waters based on today’s event,” the agency said in a statement.

The United Kingdom Maritime Trade Operations, which is run by the British navy, put out an alert early Thursday urging “extreme caution” after the incident.

“We are deeply concerned by reports of explosions and fires on vessels in the Gulf of Oman,” the agency said. “We are in contact with local authorities and partners in the region.”

The Strait of Hormuz is the only sea passage from the Persian Gulf to the ocean, however, making it one of the world’s most important sea lanes.

Larsen said past experience is that even with increased danger, commercial shipping will continue to use the route.

“Shippers will be cautious with taking their ships into the region, but as we’ve seen many times before when the risks are high, so are the rewards, so I think shippers will continue their trade,” he said in a telephone interview from London, where he was attending a meeting of the United Nations’ International Maritime Organization’s Maritime Safety Committee.

“You may see some sort of naval cooperation and guidance to shipping being set up which will render protection to shipping through the area, but it will depend on what the investigation shows.”