A gunman cut through a fence to avoid security and opened fire at Northern California's popular Gilroy Garlic Festival, killing three and wounding at least 15 before police fatally shot him as terrified people and performers ran for cover. 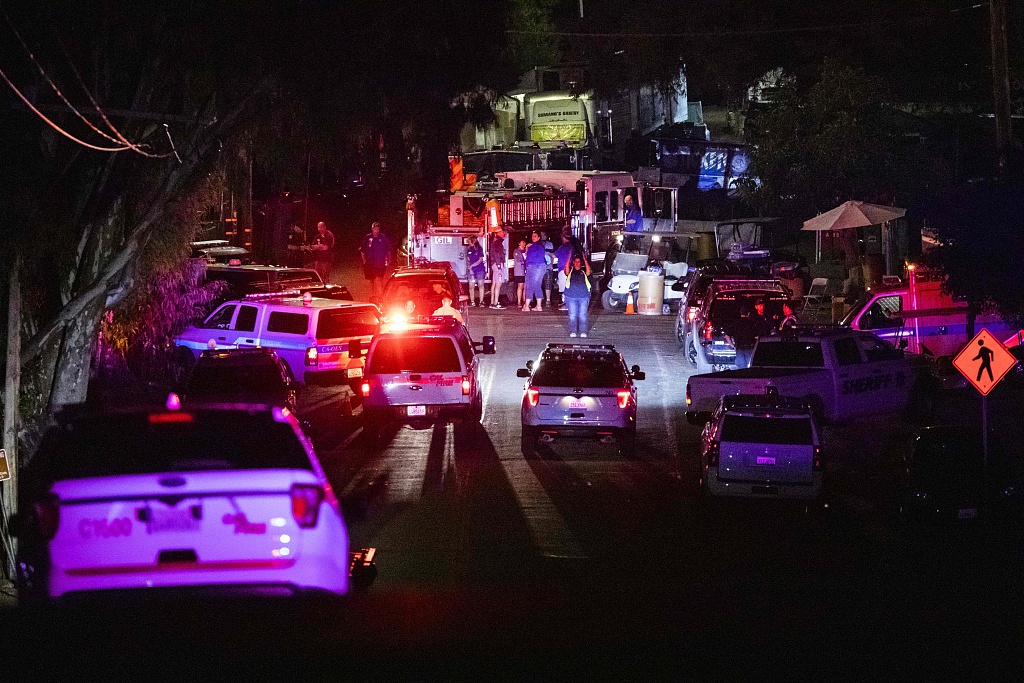 Police vehicles arrive on the scene of the investigation following a deadly shooting at the Gilroy Garlic Festival in Gilroy, 80 miles south of San Francisco, California on July 28, 2019. (Photo: VCG)

Gilroy Police Chief Scot Smithee said the gunman was armed with a rifle and sneaked in through a fence that borders a parking lot next to a creek. He appeared to randomly target people when he opened fire just after 5:30 p.m. Sunday, the conclusion of the three-day festival that attracts more than 100,000 people to the city known as the "Garlic Capital of the World."

Police responded within a minute, engaged the suspect and killed him, Smithee said.

Some witnesses reported a second suspect, Smithee said, but it was unclear whether that person was armed or simply provided assistance. A manhunt continued late into the night.

Smithee called the scene at the festival a "nightmare you hope you never have to live."

The wounded were taken to multiple hospitals, and their conditions ranged from fair to critical, with some in surgery Sunday night. At least five were treated and released. 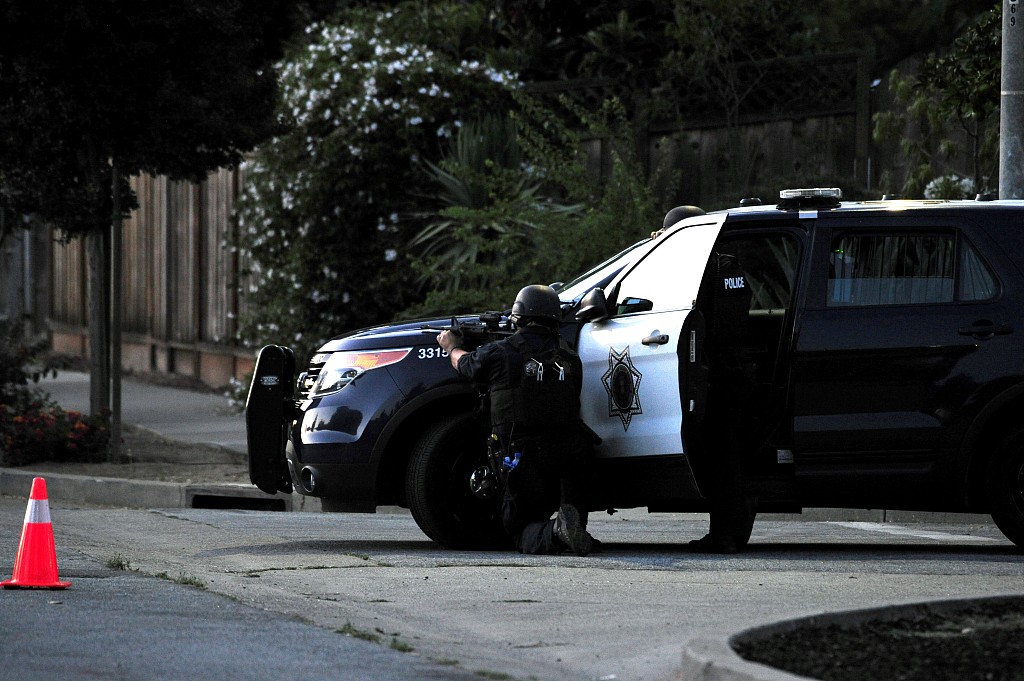 Sniper takes aim on a house where police thought one of the shooters from mass shooting at the Gilroy Garlic festival might have been in Gilroy, California on July 28, 2019. (Photo: VCG)

The Gilroy Garlic Festival features food, cooking contests and music. It's a decades-old staple in the agricultural city of 50,000 about 80 miles (176 kilometers) southeast of San Francisco, and normally a sea of tranquility for families. Security is tight — festival-goers pass through metal detectors and their bags are searched.

On Sunday, the band TinMan was starting an encore with the song "We're an American Band" when the shooting started.

Singer Jack van Breen said he saw a man wearing a green shirt and grayish handkerchief around his neck fire into the food area with what looked like an assault rifle. Van Breen and other members of the band dove under the stage.

Van Breen, from nearby Santa Clara, said he heard someone shout: "Why are you doing this?" and the reply: "Because I'm really angry." 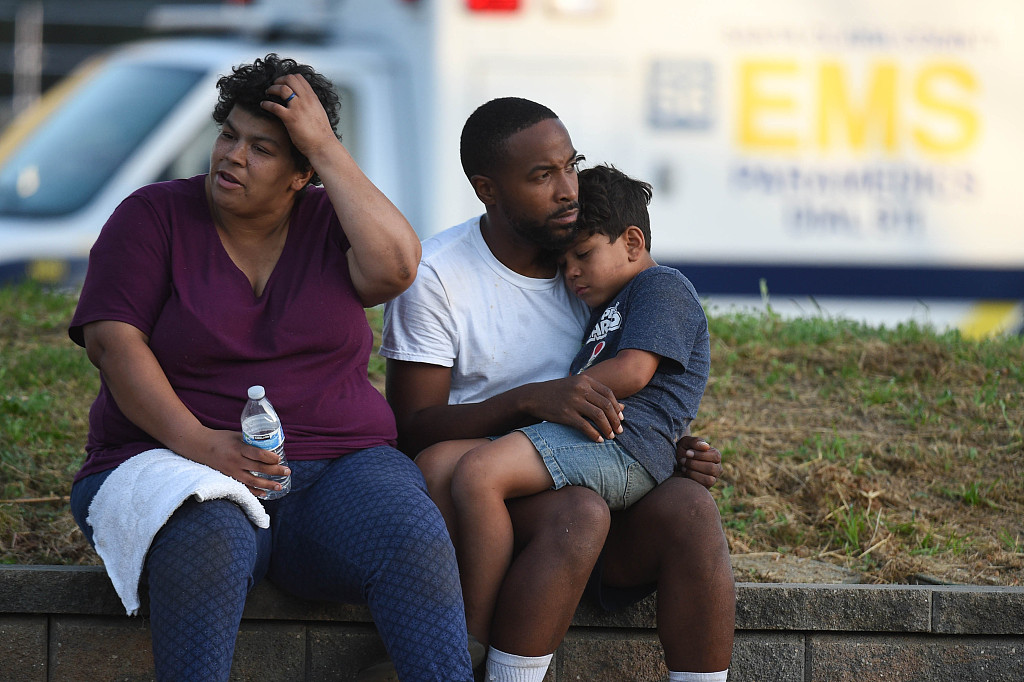 Their audience began screaming and running, and the five members of TinMan and others dove under the stage.

Van Breen's bandmate, Vlad Malinovsky of Walnut Creek, California, said he heard a lot of shots and then it stopped. Later, law enforcement came by and told the band members and others hiding with them to come out with their hands up.

Taylor Jackson was working at a booth drawing caricatures of festival-goers when she heard gunfire, saw people running and "ran for the hills." She said her boss ran in the opposite direction. Several hours later, Jackson was at a reunification center trying to get information on her whereabouts.

Donna Carlson of Reno, Nevada, was helping a friend at a jewelry booth when "all of a sudden it was pop, pop, pop. And I said, 'I sure hope that's fireworks.'" She got on her hands and knees and hid behind a table until police told her it was safe to leave.

In a tweet, California Gov. Gavin Newsom called the bloodshed "nothing short of horrific" and expressed appreciation for the police response. President Donald Trump tweeted before authorities confirmed the gunman was dead and urged people to "be careful and safe!"

Evenny Reyes of Gilroy, 13, told the Mercury News that she spent the day at the festival with her friends and relatives.

"We were just leaving and we saw a guy with a bandanna wrapped around his leg because he got shot. And there were people on the ground, crying," Reyes said. "There was a little kid hurt on the ground. People were throwing tables and cutting fences to get out."

Reyes said that she didn't run at first because the gunshots sounded like fireworks.

"It started going for five minutes, maybe three. It was like the movies — everyone was crying, people were screaming," she said.

Smithee said the festival is a source of pride for the community and that thousands donate their time to make it a success.

"It's incredibly sad and disheartening that an event that does so much good for our community has to suffer from a tragedy like this," he said.