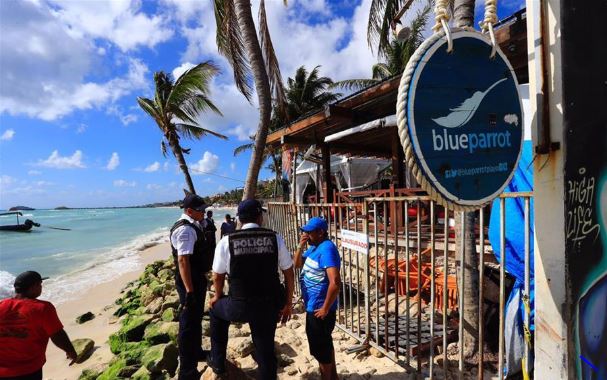 Police stand outside the nightclub where a shooting occurred during the BPM electronic music festival, in Playa del Carmen, in Quintana Roo, Mexico, on Jan. 16, 2017. (File Photo: Xinhua)

The attack around 8 p.m. Sunday saw two assailants open fire in the Las Virginias restaurant-bar, then flee aboard a vehicle that was waiting outside.

Alberto Capella, chief of police for Quintana Roo state, where the resort is located, said the crime was likely drug related.

"Given the characteristics of the place and several clues, they (the assailants) have something to do with drug dealing," Capella told a morning news show on the Televisa Network by phone.

Six of the fatal victims died at the scene, while the seventh died on the way to hospital. Several other patrons were injured.

The bar is not located close to the tourist strip, Capella said.

Playa del Carmen and nearby Cancun are Mexico's top tourism destinations, and both have seen a rise in incidents of drug-related crimes.

In January 2017, three foreigners and two Mexicans were killed in a shooting at Playa del Carmen's popular Blue Parrot bar, located on the main tourist strip.