WORLD Shootings up amid police shake-ups

Shootings up amid police shake-ups 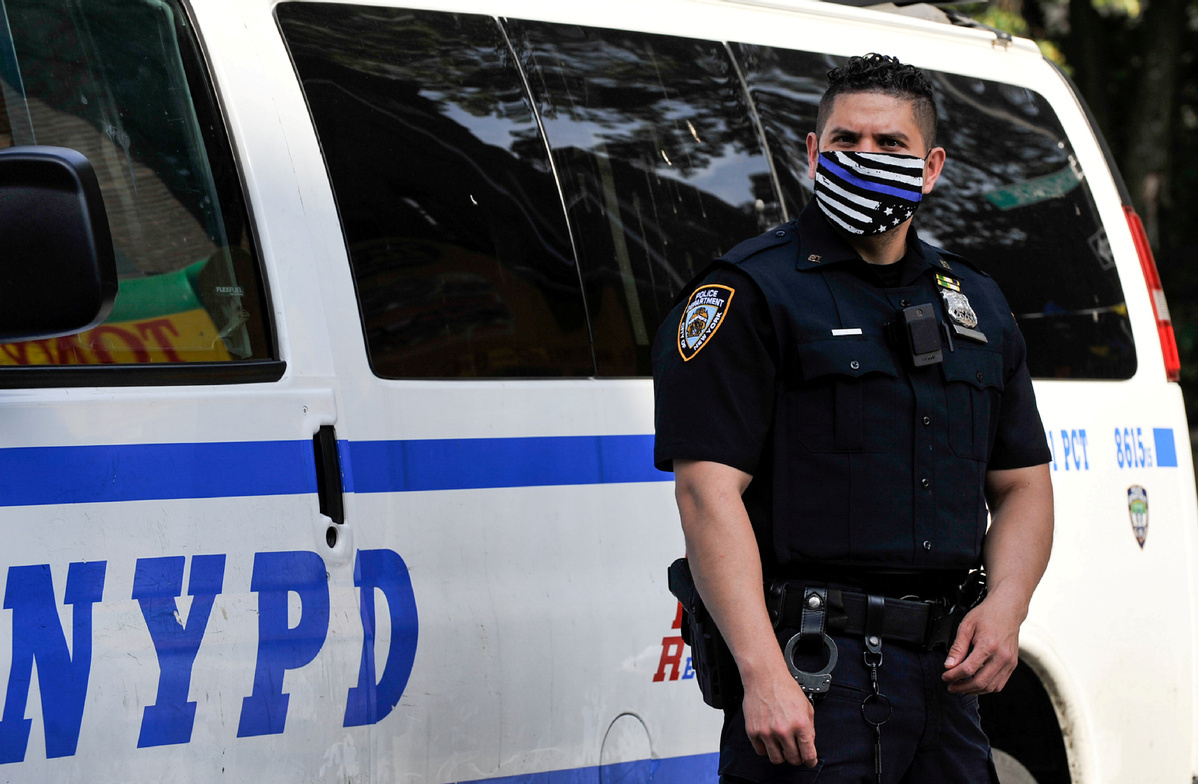 A NYPD police offer wears a Blue Line face mask indicating support for law enforcement at the scene of a shooting in the Brooklyn borough of New York City, US, June 25, 2020. [Photo/Agencies]

The current moves to defund police departments across the United States also have coincided with a sharp jump in gun-related crimes, particularly in New York City.

New York Mayor Bill de Blasio, who has had an uneasy relationship with the NYPD in his six years in office, on Monday announced plans to cut $1 billion from the police department's $6 billion budget and redirect the funds to community programs.

The City Council was expected to vote on the overall $88 billion budget late Tuesday.

New York also is facing as much as a $9 billion budget shortfall due to reduced tax collections stemming from the COVID-19 pandemic shutdowns, which started in mid-March.

On June 15, the NYPD disbanded its 600-member plainclothes unit, which is credited with keeping illegal guns off city streets.

De Blasio in 2014 halted New York's controversial "stop and frisk" policy on guns, which disproportionately affected minority men. The mayor has tried to balance a progressive approach to policing with trying to keep the city's crime rate down.

"You know I am very concerned about the uptick in shootings," de Blasio told reporters Monday. "We have to make sure we can handle that, and we have to make reform."

Despite de Blasio's moves, a group of protesters has camped outside City Hall, pressuring the mayor to do more to reduce the police presence in the city.

Public Advocate Jumaane Williams said Tuesday that he would invoke the city charter to block de Blasio from collecting property taxes if he doesn't freeze NYPD hiring and take police out of schools. The mayor's press secretary said Tuesday that the public advocate doesn't have such authority.

While New York City has recently started to reopen, because of a practical halt in tourism, a closure of Broadway theaters, along with a shutdown of museums, major sporting events and concerts, any revenue the city would pick up from those activities has dried up. Many affluent residents also have left and have wondered whether they will return.

The outrcry against police stems from the killing of George Floyd, a Black man who died on May 25 when a white Minneapolis police officer knelt on his neck. Floyd's death sparked global protests, along with outbreaks of violence and looting.

The shooting death of Rayshard Brooks in Atlanta on June 12 added to the strife. Along with the protests came calls for America to address racial injustice, with numerous corporations issuing public statements against racism and making contributions to Black Lives Matter and other groups.

Around the country, the toppling of statues, mainly of Confederate military figures, was part of the unrest, due to their connection to slavery in the US. Monuments to George Washington, Abraham Lincoln, Ulysses S. Grant and Christopher Columbus also have been defaced.

Over the weekend, the number of people shot in New York City climbed to 600 on the year, according to NYPD statistics. Shootings are up 44 percent, while homicides have risen 23 percent. Still, major crimes overall are down about 3 percent on the year.

"This is a lot of violence that we have not seen in a long, long time," NYPD Chief of Patrol Terence Monahan told Newsday on Monday. "I am extremely concerned on how we are going to deal with this moving forward."

Monahan told Newsday that courts and prosecutors, because of coronavirus constraints along with bail reform enacted in Albany, the state capital, prosecutions have slowed.

"Even right now, the NYPD doesn't have enough manpower to shift cops to one neighborhood without making another neighborhood less safe," Police Benevolent Association President Patrick Lynch said in a statement Monday on the budget cut. "We will say it again: the Mayor and the City Council have surrendered the city to lawlessness."

In the Bronx over the weekend, Brandon Hendricks, 17, a standout high school basketball player who was preparing for college, was shot and killed.

"I think we spoke as late as 9:30 last night (Sunday), and then two hours later, he was gone. We were talking about the things he needed to do in preparation to go to college," Noel Ellison, Hendricks' uncle, told CBS News New York.

Police said Hendricks was shot in the neck just before midnight Sunday following an argument.

"We have to figure out what's going on with these young people that gives them such a sense of hopelessness, that they would just throw out their life and somebody else's life away just like that," said Hendricks' coach Nigel Thompson, CBS reported.

Chicago, which has suffered from gun violence for several years, saw 65 people shot over the weekend, 18 of them fatally. A 10-year-old girl and a 20-month-old boy died in the gunfire.

"We ALL need to be outraged by the violence we are seeing in our city. This baby, and all of our residents, deserve better," Chicago Police Superintendent David O. Brown said Saturday.

Chicago Mayor Lori Lightfoot said Monday that "seeing our babies being killed" is heartbreaking. "This can't be who we are as a city."

As of June 14, 268 people had been murdered in Chicago, an increase of 22 percent from last year but slightly below the number in 2017 and 2016, according to city police data.

In Seattle, in an area known as CHOP (Capitol Hill Organized Protest) that has been taken over by protesters, there have been four shootings, with two fatalities, both Black teenagers. The police precinct building in the area was abandoned amid earlier protests.

"It's very unfortunate that we have another murder in this area identified as the CHOP," Seattle Police Chief Carmen Best said Monday. "And, we've had multiple other incidents — assaults, rapes, robbery, shootings — so this is something that's going to need to change."

In Philadelphia, the City Council on Thursday voted to cut police funding by $33 million.

The Minneapolis City Council voted unanimously Friday on a change to the city charter that would result in disbanding the police department.

Early last month in Los Angeles, Mayor Eric Garcetti proposed cuts of up to $150 million in the LAPD budget.