WORLD Short and anything but sweet: the rise and fall of Liz Truss

Short and anything but sweet: the rise and fall of Liz Truss 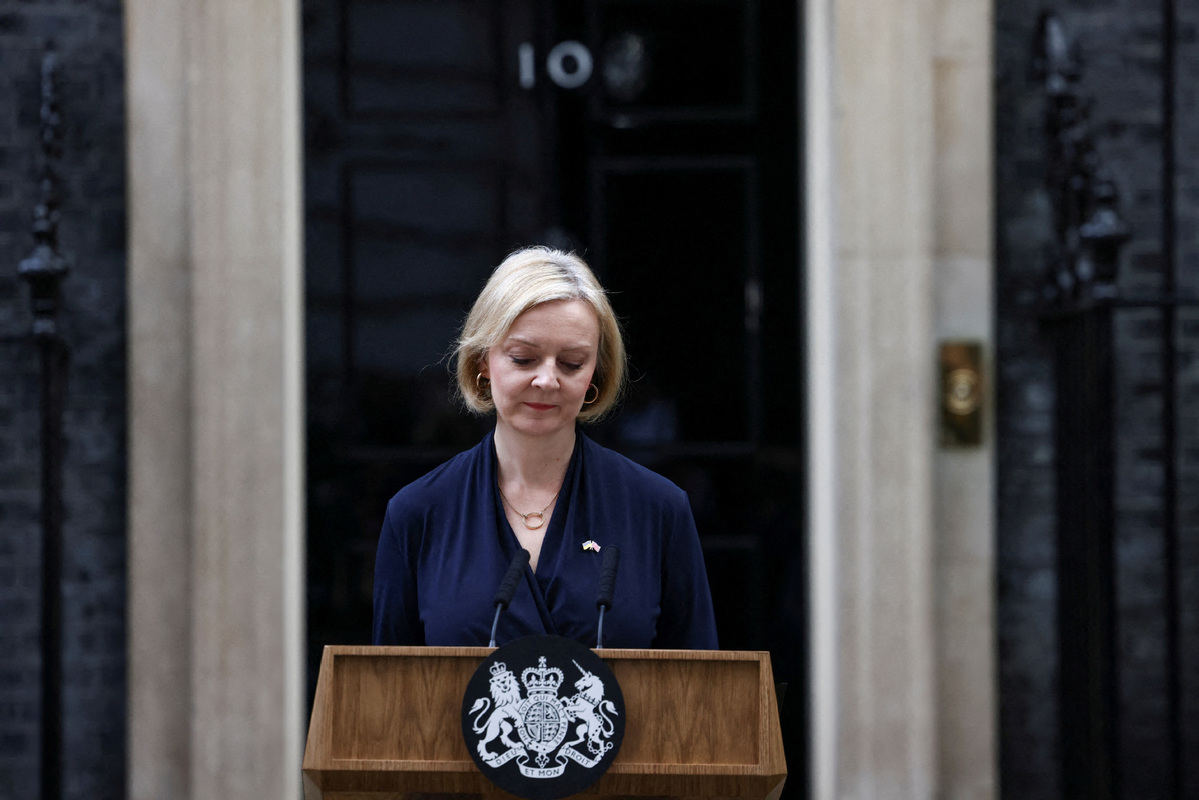 Even when rated against some of the other dramatic political episodes the world has witnessed recently, the rise and crashing fall of Britain's shortest-serving prime minister, Liz Truss, is a remarkable period of time.

As a former republic-supporting member of the Liberal Democrats who campaigned against Britain leaving the European Union in the 2016 referendum, Truss was an unlikely choice to lead the Conservative Party after Boris Johnson's chaotic tenure in Downing Street.

But by embracing the spirit of former prime minister Margaret Thatcher, mainly through photo opportunities that replicated famous images of the woman who led Britain through the 1980s, Truss won the support of the party faithful, and was picked for a new era, which has ended sooner and more messily than even her biggest critics could have anticipated.

From the start, the omens were not good; a much-derided tweet in which she vowed to "hit the ground on day one", torrential rain for her inaugural news conference, and the Queen dying within 48 hours of her appointment were all unfortunate.

When politics resumed after the royal mourning period, Truss told a Sky News interview she was not afraid to be unpopular, before she and then chancellor of the exchequer Kwasi Kwarteng demonstrated that when they unveiled a minibudget built on unfunded tax cuts.

Their moves send the pound down and interest rates up, hitting an electorate already struggling with the cost of living crisis, and following desperate back-pedalling, Kwarteng was sacked after less than six weeks in office.

His replacement, Jeremy Hunt, ripped up almost all of Kwarteng's plans, sending Truss's flagship economic policy to the breakers' yard, and less than a week later, Home Secretary Suella Braverman left office, nominally over a breach of the ministerial code of conduct, but reportedly after she and Truss had a full-blown row over wildly differing views on immigration.

Then, her already tenuous grip on power vanished altogether amid scenes of chaos during a Parliamentary vote on fracking, going against a 2019 Conservative general election manifesto promise.

Conservative members of Parliament were told the vote was a vote of confidence in the government, so they must vote as they were told or risk being suspended, but a substantial number refused, and the vote went ahead amid claims from members of other parties that they had seen MPs bullied and physically manhandled into going through the lobby to cast their vote for the government.

Truss's leadership had long been in very public disarray, but now her entire party was in turmoil and after less than two months, her authority was utterly destroyed.

But maybe this is no surprise, as Conservative MPs never wanted Truss as their leader. Through the rounds of leadership election voting by MPs, she was never the popular choice, but reached the final two, along with former chancellor of the exchequer Rishi Sunak.

The pair then went head to head in a leadership contest stretched out across the summer, to seek the votes of around 200,000 grassroots party members across the country.

At one public hustings events, Sunak said of Truss's economic plans: "Inflation is the enemy that makes everybody poorer, it erodes your savings, it erodes your living standards, it means those of you who have mortgages will see your interest rates go up higher and higher … so I don't think the responsible thing to do right now is to launch into some unfunded spree of borrowing and more debt, that will just make inflation worse; it will make the problem longer."

But by a margin of 57 percent to 43 percent, members opted for Truss, ushering in one of the most disastrous periods in British political history, which culminated in her announcement of resignation on Thursday after just 44 days in office, comfortably breaking the previous record for the shortest ever reign, set by George Canning's 119 days in 1827.

Global events that affected all countries undoubtedly played a significant role in the political hurricane that blew Truss away, but the ongoing economic aftershock of Brexit made them worse. The Financial Times quoted the Organisation for Economic Co-operation and Development as saying that economic growth in the UK will grind to a halt next year, with the only G20 country to have a worse outlook being Russia, which is under sanctions.

The Brexit referendum ended the premiership of David Cameron in 2016, and his successor Theresa May quit in 2019, worn down by its unsolvable nature.

Only the pandemic saved Johnson from having to face up to the full effects that have played a role in unseating Truss, and the very public party meltdown that accompanied her exit has left the reputation of the entire Conservative Party, which boasted of having delivered Brexit, with wounds that will take years to heal.

But there were warnings of the heavy cost of Brexit isolation in the run-up to the referendum.

As one Conservative MP tweeted at the time, " (the Leave campaign) cannot name one country we would get a better trade deal with if we left the EU", and also "I don't want my daughters to grow up in a world where they need a visa or permit to work in Europe; or where they are hampered from growing a business because of extortionate call costs and barriers to trade".

That MP was Liz Truss.