In one unanimous show of hands, Democratic presidential candidates moved to the mainstream the idea of full health insurance for people who don't have legal permission to be in the United States. 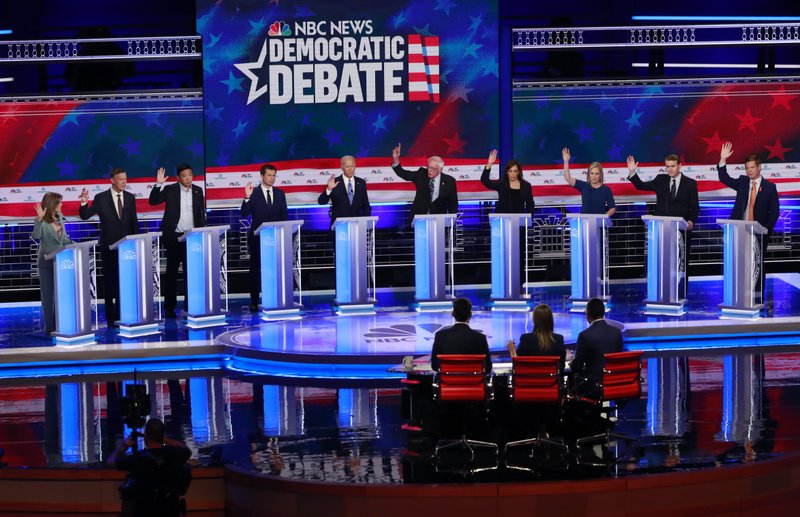 In this June 27, 2019 photo, Democratic presidential candidates raise their hands when asked if they would provide healthcare for undocumented immigrants, during the Democratic primary debate hosted by NBC News at the Adrienne Arsht Center for the Performing Arts in Miami. (Photo: AP)

But turning that debate night moment into reality would mean reversing longstanding federal policies that have only gotten stricter. The idea is so new that independent experts say they don't have a reliable cost estimate. Politically, it wouldn't happen without a pitched battle.

President Donald Trump, doubling down on tough immigration policies as he seeks a second term, all but thanked the 10 Democrats on the debate stage last Thursday in Miami.

"All Democrats just raised their hands for giving millions of illegal aliens unlimited healthcare," he wrote on Twitter. "How about taking care of American Citizens first!? That's the end of that race!"

Health coverage for people without legal permission to be in the country has mainly been a demand from the political left, echoed by some public health experts who say society is better protected if everyone has medical care. Think children going without measles shots.

A new CNN poll found support among roughly 6 in 10 Democratic voters for government health insurance coverage for people in the country illegally. It also highlighted a generational difference. Democrats under 45 supported coverage by 70% to 29% while those 45 and older were more closely divided, 55% to 41%.

The poll raised a general election warning flag that echoed Trump's dismissive tweet: Among all Americans, 59% were opposed, while 38% were in favor.

For now, flagship federal health programs remain off limits to all but US citizens and legal residents. That includes Medicare, Medicaid, Children's Health Insurance, and the Obama-era Affordable Care Act, or ACA. Congress even forbade unauthorized immigrants from buying ACA coverage with their own money.

America doesn't slam the door completely. Federally funded community health centers provide basic medical care to the uninsured without asking immigration questions. Hospital emergency rooms are required by law to treat and stabilize all patients, with government subsidizing the cost. Some states, like California, use their own funds to cover children regardless of immigration status.

Of the 10 million to 11 million immigrants in the country without legal permission, many appear to have private coverage. The Kaiser Family Foundation estimates that roughly 4 million people are uninsured because of immigration status, while the Migration Policy Institute has a higher number, nearly 6 million. Both are nonpartisan research organizations.

Democrats debating in Miami argued that all Americans would be better off if everyone in the country had medical care, pointing out that most immigrants are working and paying taxes that support programs like Medicare and Social Security.

"You cannot let people who are sick, no matter where they come from, no matter what their status, go uncovered," said former Vice President Joe Biden. His approach calls for building on the Obama law he helped to pass, which now denies benefits to immigrants living in the country without permission.

It wouldn't be a freebie, argued South Bend, Indiana, Mayor Pete Buttigieg, who has talked about a buy-in plan. "They pay sales taxes, they pay property taxes directly or indirectly," he said. "This is not about a handout. This is an insurance program."

Other Democrats say program design could lead to broader public acceptance. "If it is clear that they are paying for it, they could be getting basic care and avoid being in the emergency room at taxpayer expense," said Rep. Ro Khanna, D-Calif.

The issue has been considered so politically sensitive that the "Medicare for All" bills in Congress don't directly deal with it. Instead legislation from Vermont Sen. Bernie Sanders and a similar bill in the House call for covering every US "resident," and they delegate the secretary of Health and Human Services to define that term in a regulation.

The bills also call for measures to deter immigration for the "sole purpose" of getting free medical care. That implicitly acknowledges that health care benefits could wind up encouraging more immigrants.

"Adopting subsidized major health care programs for illegal aliens serves as the ultimate 'pull factor' for migrants and would exacerbate our nation's border crisis," said R.J. Hauman of the Federation for American Immigration Reform, which supports curbs on immigration.

"Both Hillary Clinton and Barack Obama would be to the right of all current (Democratic) candidates on this issue," he added.

Cost is another factor. Hauman said the coverage would be a new "multi-billion dollar" expense for taxpayers. However, independent experts at the Kaiser Foundation and Migration Policy say there's no authoritative number because the question hasn't been rigorously researched.

Randy Capps, a senior researcher with the Migration Policy Institute, said immigrants living in the country illegally are generally a younger population, so bringing them into the private insurance system could also help with costs.

"Undocumented immigrants are disproportionately young and healthy," said Capps. "From the point of view of providing preventive and primary care to a large group of people who are younger and healthier now but might get sicker later, it makes sense."