Sick and elderly worry Brexit will hurt access to meds 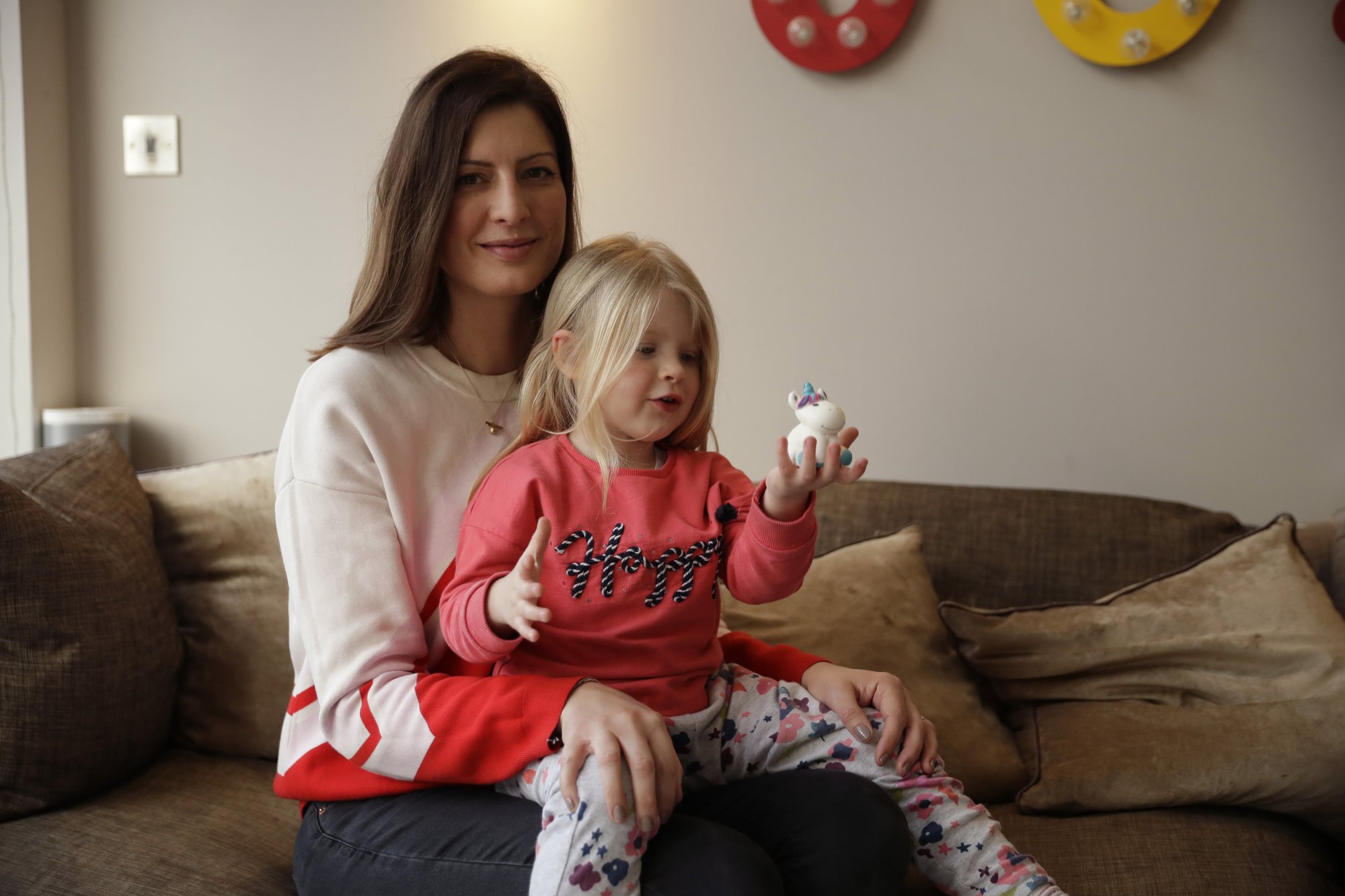 In this Wednesday, Jan. 23, 2019 photo, Victoria Mickleburgh and her daughter Grace pose for photographs at their home in Cobham on the outskirts of south west London. (Photo: AP)

Things are already tough for Victoria Mickleburgh, whose 3-year-old daughter Grace, has Type 1 diabetes and needs insulin every day to stay alive.

Mickleburgh, 38, gave up her job as a management consultant to care for her daughter, who must be monitored constantly — even in the middle of the night — to make sure her blood sugar levels are steady. Every time Grace has so much as a cookie, Vicki needs to check her.

So for this family in southeastern England, the question of whether insulin and the equipment needed to deliver it will be available if Britain leaves the European Union without a Brexit agreement is more than just a political debate. Unlike produce or machinery, a delay in the supply of drugs from continental Europe could have dire consequences.

“It’s a life or death situation,” says Mickleburgh. The constant talk about a no-deal Brexit and the havoc it could cause in trade with the EU is making her nervous. “You don’t want the additional stress or worry of where her next vial of insulin is going to come from.”

Victoria’s stress highlights a problem for everyone in this country. Britain’s pending departure from the EU comes at a time when drug supplies are already stretched because of market forces that have little to do with Brexit. Now pharmacists and drugmakers are concerned that shortages of life-saving medicines may occur if Britain can’t negotiate an agreement to facilitate trade after March 29 — the day it is scheduled to leave the bloc.

The risk of a no-deal Brexit is increasing as Prime Minister Theresa May tries to push ahead with the draft agreement she negotiated with the EU after it was overwhelmingly defeated by Parliament. While opposition leaders have demanded that the government reject the possibility of a no-deal departure, May says this would weaken her negotiating position.

Against this backdrop, the government has stepped up planning for the disruptions that are likely to be caused if 45 years of free trade end abruptly on March 29, triggering border checks that could cause lengthy delays at the English Channel ports that are the gateway to trade with the EU. Pharmaceutical companies are building up stockpiles of drugs in Britain— and insist they are ready for disruption.

“Despite the industry doing everything it can (to prepare) for no deal, the complexity of no deal means there will be stresses in the system,” said Mike Thompson, chief executive of the Association of the British Pharmaceutical Industry, which represents drugmakers who supply more than 80 percent of branded medicines to the National Health Service. “This is a challenge for everybody.”

But stockpiling isn’t enough to ensure long-term supplies because two-thirds of the medicines consumed in the UK come from the Continent and 90 percent of that is shipped on trucks through three chokepoints: Calais in France and the ports of Dover and Folkestone in Britain.

Drug companies are pushing the British government to open other ports for their use. There are plans to lease additional ferries and the government has proposed airlifting drugs if necessary.

“The government recognizes the vital importance of medicines and medical products and is working to ensure that there is sufficient roll-on, roll-off freight capacity to enable these vital products to continue to move freely into the UK,” Health Secretary Matt Hancock said a statement, adding that medicines would be given priority over other things.

Consumers wonder whether the government is doing enough. Much of the focus has been on drugs that require strict temperature controls and are most at risk from long delays on hot summer days. Insulin, for example, must be stored at between 2 degrees and 8 degrees Celsius (35.6 degrees to 46.4 degrees Fahrenheit).

Novo Nordisk, a Danish company that is Britain’s biggest insulin provider, has made expanding storage capacity one of its primary goals. The company says it has a 16-week supply of insulin in Britain, more than double the normal seven weeks, and it plans to increase that to 18 weeks within the next few months.

“In the event of a no deal Brexit, then the replenishment of the stock is the really key thing here,” said Pinder Sahota, general manager of Novo Nordisk in the UK He says the company has booked air freights and looking to transport through additional ports.

Britain is already experiencing shortages of some drugs for reasons not to do with Brexit, including manufacturing problems, increasing global demand and price pressures. The Department of Health agreed to pay a premium for 80 generic drugs that were in short supply last month, up from less than 50 in October.

Graham Phillips, superintendent pharmacist at Manor Pharmacy Group in Wheathampstead, north of London, said anxiety is increasing because of Brexit. People in his village, where many are elderly, are already calling the pharmacy because of concerns about supplies.

“I have no confidence that this can be managed on this scale,” he said. “It’s an enormous undertaking. The idea that you can stockpile the whole of the NHS’drug bill for a 6-month period, which is billions of pounds, and you can manage logistics, I think that’s cloud cuckoo land.”

The constant drumbeat of news reports about Brexit is not calming parents like Mickleburgh and others who worry about whether the contingency plans will be enough.

People with Type 1 diabetes are unable to make their own insulin, which is essential for processing food. Without regular doses, diabetics could suffer complications including serious damage to their heart and blood vessels, kidneys, eyes, nerves and feet.

Mickleburgh looked over at Grace — all blonde hair and energy — and had to stop herself from paying attention to her for even a moment. She handed Grace a Lego block, and steeled herself.

“There’s no manual” to dealing with a sick child, she said. “Sometimes things don’t always go to plan.”