WORLD Sickness, fear, harassment in Mexico whittle away at caravan

Sickness, fear, harassment in Mexico whittle away at caravan 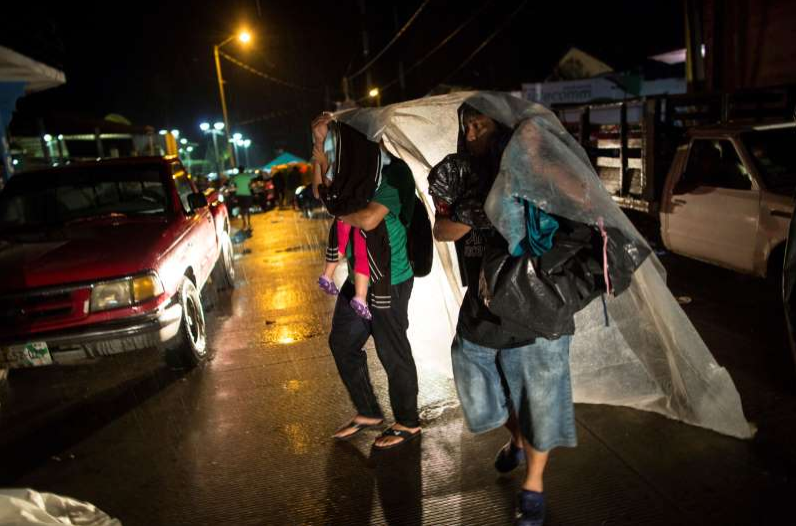 Little by little, sickness, fear and police harassment are whittling down the migrant caravan making its way to the US border, with many of the 4,000 to 5,000 migrants who resumed their journey Thursday complaining of exhaustion.

The group, many with children and even pushing toddlers in strollers, departed Mapastepec at dawn with more than 1,000 miles still to go before they reach the US border.

They had advanced about 95 miles (150 kilometers) as the crow flies since thousands burst across Mexico's southernmost border six days earlier.

The column stretched for more than a mile as the migrants left the town square where many spent the night. The municipality of some 45,000 people, along with churches and volunteers, offered some medicine and donated water, clothing baby formula and baby bottles.

As they reached the highway, families with young children packed sidewalks asking for donations and rides to the next stop, Pijijipiapan, about 25 miles (40 kilometers) further ahead.

Melkin Claros, 34, was traveling with his 7-year old son and a teenage nephew and remained steadfast in his goal. "Everyone's objective is to arrive (in the United States)," he said, adding that he planned to request asylum because gangs made it impossible to live in Honduras.

"It's true you risk your life a lot here, but we risk more in our country."

Still, Mexican officials say nearly 1,700 have dropped out of the caravan to apply for asylum in Mexico, and a few hundred have accepted government offers to bus them back to their home countries.

Carlos Roberto Hernandez, of Yoro province in Honduras, dropped out after developing a rumbling cough during the scorching daytime heat and evening rains.

"We got hit by rain, and ever since then I've had a cold," Hernandez said. Asked Wednesday if he would make another attempt to reach the US, he said emphatically: "No. I'm going to make my life in Honduras."

For Pedro Arturo Torres, it appeared to be homesickness that broke his determination to reach the US.

"We didn't know what lay ahead," said Torres. "We want to return to our country, where you can get by — even if just with beans, but you can survive, there with our families, at peace."

The Mexican federal government's attitude has also played a role in wearing down the caravan.

All the food, old clothes, water and medicine given to the migrants have come from private citizens, church groups or sympathetic local officials.

The federal government hasn't given the migrants on the road a single meal, a bathroom or a bottle of water. It has reserved those only for migrants who turn themselves in at immigration offices to apply for visas or be deported.

Sometimes federal police have interfered with the caravan.

In at least one instance, The Associated Press saw federal police officers force a half-dozen passenger vans to pull over and make the drivers kick migrants off, while leaving Mexican passengers aboard. In a climate where heat makes walking nearly impossible at midday, such tactics may eventually take a toll on migrants' health.

In Mapastepec, where the main group stayed Wednesday night, it appeared the size of the caravan had diminished slightly. The United Nations estimated earlier in the week that about 7,000 people were in the group. The Mexican government gave its own figure Wednesday of "approximately 3,630."

Parents say they keep going for their children's futures, and fears of what could happen to them back home in gang-dominated Honduras, which was the main motivation for deciding to leave in the first place.

"They can't be alone. ... There's always danger," said Ludin Giron, a Honduran street vendor making the difficult journey with her three young children. "When (gang members) see a pretty girl, they want her for themselves. If they see a boy, they want to get him into drugs."

Refusing either demand can be deadly. Honduras has a homicide rate of about 43 per 100,000 inhabitants, one of the highest in the world for any country not in open war.

On Wednesday, Giron crammed with her children, 3-year-olds Justin and Nicole and 5-year-old Astrid, into the seat of a motorcycle taxi meant for only two passengers. Also perched on the perilously overcrowded motorbike were Reyna Esperanza Espinosa and her 11-year-old daughter, Elsa Araceli.

Espinosa, a tortilla maker from Cortes, Honduras, said there was no work back home. "That's why we decided to come here, to give a better future for our children," she said.

Such caravans have taken place regularly, if on a smaller scale, over the years, but US. President Donald Trump has seized on the phenomenon this year and made it a rallying call for his Republican base ahead of the Nov. 6 midterm elections.

Trump has blamed Democrats for what he says are weak immigration laws, and he claimed that MS-13 gang members and unknown "Middle Easterners" were hiding among the migrants. He later acknowledged there was "no proof" of the claim Middle Easterners were in the crowd. But he tweeted Wednesday that the US "will never accept people coming into our Country illegally!"

Associated Press journalists traveling with the caravan have met throngs of Hondurans, as well as Guatemalans, Salvadorans and Nicaraguans, but no one from the Mideast.

Another, smaller caravan earlier this year dwindled greatly as it passed through Mexico, with only about 200 making it to the California border. Those who do make it into the US face a hard time being allowed to stay. US authorities do not consider poverty, which many cite as a reason for migrating, in processing asylum applications.

Mejia said she was worn out. Still, she pledged to go on. "I've walked a long way. I don't want to return. I want a better future for my children."