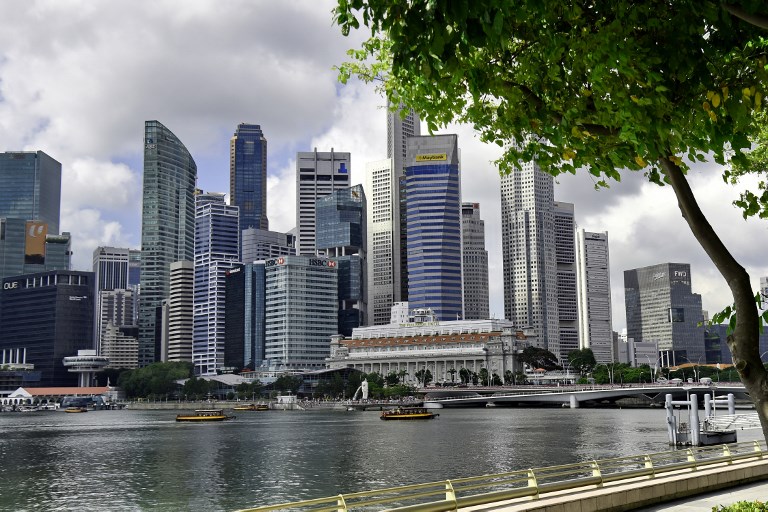 This picture taken on January 2, 2019 shows the skyline of the financial business district in Singapore. (Photo: AFP)

Singapore is creating a vast eco-tourism zone in a bid to bring in more visitors, but environmentalists fear the development will damage natural habitats and are already blaming it for a series of animal deaths.

While it may be best known as a financial hub with scores of high-rise buildings, tropical Singapore is still home to patches of rainforest and an array of wildlife, from monkeys to pangolins -- also known as scaly anteaters.

In one green corner of the city sits a zoo and two sister attractions -- a night safari and river safari -- that have long been big draws for foreign and local visitors.

Now jungle is being cleared in the same area to make way for a bird park, a rainforest park and a 400-room resort, to create a green tourism hub it is hoped will eventually attract millions of visitors a year.

But the project in the Mandai district has ruffled the feathers of environmentalists.

They believe that rather than promote biodiversity, it is too imposing for the area, will destroy forest habitats and they say insufficient safeguards were put in place before work began -- leading to animals being killed on roads.

The row has highlighted concerns about rapid development in space-starved Singapore, and worries that some of the country's more wild and green corners are being lost only to be replaced with something more artificial.

"I think you are getting your priorities wrong if you are replacing natural heritage with captive breeding," Subaraj Rajathurai, a veteran wildlife consultant, told AFP.

With the new development, it appears that "making money was more of a priority than finding the balance and preserving biodiversity", he added.

But Mandai Park Holdings, which is overseeing the project through its development arm, insists work is being carried out sensitively and will bring improvements.

The district, which sits next to a protected nature reserve and has been earmarked for development for years, is mostly abandoned villages and farmland that have been swallowed by the surrounding jungle.

Work is already well under way in an area that is home to animals including flying lemurs and deer, with construction cranes looming over hillsides stripped bare of jungle.

A major focus of concern has been the animal deaths on the main road leading up to the zoo as forest is cleared.

Several deer, a critically endangered pangolin and a leopard cat are among animals to have perished after straying in front of vehicles, according to environmentalists.

Subaraj blamed the deaths on a lack of protective measures, pointing in particular to a failure to put up temporary barriers around the road quickly enough.

"It's crazy -- it would have been so easy to avoid that happening," he said.

But Mandai Park Holdings insists it is doing everything it can to prevent animal deaths on the roads.

Barriers have now been put up along much of the road, as well as a rope bridge for monkeys to cross above the traffic and road signs warning motorists about animals in the area.

A permanent bridge covered in shrubs and trees to allow animals to cross the road, which divides two major parts of the development, will be ready later this year.

"We have been working with the nature community, really from the word go, to work out what we should do to actually protect animals and keep them off the roads," Mike Barclay, Mandai Park Holdings CEO, a former senior airline executive, told AFP.

"Is it perfect? No. But we are doing everything that we can to mitigate."

The new bird park -- which will replace an existing one elsewhere in Singapore -- will feature nine aviaries, while the rainforest park will have walkways among treetop canopies. The hotel is being developed by Singapore-based resort chain Banyan Tree.

Green groups have raised concerns that besides the roadkill deaths, noise and light pollution from the large resort could affect the surrounding area, although the developer insists it will be designed carefully to limit any impact.

Mandai Park Holdings, a subsidiary of Singapore's state investor Temasek, did not disclose the cost of the project. It is being funded by Temasek and the government.

Defenders of the development insist it is better than throwing up more high-rises in a city that has developed at breakneck speed in recent decades.

But for green activists such as Ho Hua Chew, vice president of the Nature Society (Singapore), a project on such a vast scale is another setback for the country's natural environment.

"We don't say don't develop it -- just leave some more space for the wildlife," he told AFP.

"Over the past decade, development has increased very fast. We have fought hard but a lot of areas have been lost."