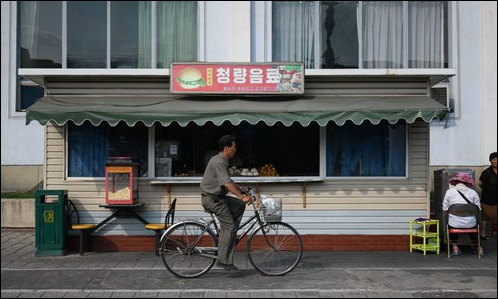 A man cycling past a fast-food burger stall on a street in Pyongyang on June 12. (Photo: VCG)

Choson Exchange, a non-governmental organization based in Singapore, has been helping North Korean entrepreneurs and individuals to incubate business ideas.

The organization also arranges for experts and scholars who are interested in North Korea to visit the country, helping policymakers and researchers better understand the country's economic environment.

After the historic meeting between US President Donald Trump and North Korea leader Kim Jong-un in Singapore last month, the world is considering the possibility of the market opening up in one of the world's most mysterious and isolated countries.

Many feel excited that they may have a chance to enter the untapped economy. Choson Exchange, a non-governmental organization based in Singapore, is among those with the best vantage point for understanding opportunities.

Choson Exchange was founded in 2010, and provides workshops, internships, mentoring and scholarships to North Korean entrepreneurs and individuals who incubate business ideas.

The organization also arranges for experts and scholars who are interested in North Korea to visit the country at their own expense. The visitors are required to give free lectures on subjects such as business, finance, law and economic policy to North Koreans.

Geoffrey See, founder of Choson Exchange, said that the founding of Choson Exchange was quite accidental. He told the Global Times that he first set foot in North Korea back in 2007. Before the visit, he thought that because North Korea was a socialist country that adopted a planned economy, so no one would show any real interest in business and economics. But the journey transformed him.

His guide was a college student who told See that her wish was to become a "business leader," and to "prove women can do business." She asked See to bring economics books next time. "I was very surprised by her," he said.

He said he had not expected that so many North Koreans were eager to study business knowledge and start their own businesses.

Choson Exchange is headquartered 7 kilometers away from the Capella Hotel where Trump and Kim met. The four-story building doesn't have an entrance guard and sits between a nail salon and a massage parlor. This Global Times reporter was led by working staff to a meeting room on the third floor. Looking around, no signs of North Korea can be identified in the room.

Calvin Chua, who is in charge of Choson Exchange, said that they don't have an official meeting room and they receive North Korean delegates here.

See said that while there are some Western governmental organizations and financial aid institutions funded by churches in Pyongyang, they don't really care about North Korean people, especially their youth.

"It's hard for North Koreans to get business training and build networks," he said. "Face-to-face communication is what North Koreans need."

In order to land the projects, See made great efforts to contact many international organizations to find North Korean partners, but with no success. In the second half of 2008 the North Korean side responded, and in 2009 Choson Exchange had completed its first project.

The Committee for Cultural Relations with Foreign Countries, which has a North Korean government background, is a partner with the Choson Exchange.

Gradually North Koreans are realizing they need teachers. In December 2009 the government adopted a monetary policy to deal with inflation and eliminate black market transactions. The government announced an abolition of all old currency in the market. It set the exchange rate between new currency and old currency at 1:100. It also limited the amount of old currency that could be converted each day to 100,000 per person.

The policy shocked the public. See led a team of seven international financial experts to Pyongyang to offer suggestions to college teachers, bankers and policymakers.

According to Choson Exchange, 60 to 100 people would participate in their workshops every time. The workshops were taught in English. A growing number of workshop attendees can also speak Chinese. Every year they organize five workshops and so far they have gotten involved with more than 60 business projects. Some 2,000 North Koreans have benefitted from Choson Exchange's program. More than 100 North Koreans were also awarded scholarships to visit Singapore.

But the exchanges aren't always smooth. When the situation on the Korean Peninsula is strained, Choson Exchange has to bear pressure from sponsors. Communication with North Korea remains challenging. Sometimes for weeks the organization can't get feedback from its North Korean partners and there are limitations in sending emails.

See didn't reveal how the group gets its funding. Strait Times once reported that the annual spending of Choson Exchange is about $500,000. One third of it comes from personal donations and foundations in Singapore. Lawyers and businessmen in Singapore participate in more than one third of the projects.

Out of his interest in Cold War history, Chua traveled to North Korea in 2008. However, at that time he was only allowed to see "what the guide wanted to show, and had nearly no contact with locals." He felt that the experience of being a tourist in North Korea was not complete. So when he heard his high school friend See wanted to establish the Choson Exchange, he joined and became program director.

For example, Choson Exchange organized North Koreans to attend a conference about city development and real estate in Singapore. In the conference, it was discussed that to avoid a housing bubble, the Singaporean government used economic regulations. This was difficult for the attendees to understand. The attendees asked organizers, why can't the government just set a price?

Concepts such as "why are brands important" or "why are there free email boxes" are also lost on them. Chua said there needs to be a different kind of teaching style, with more time spent explaining the basics. For example, lecturers started using the logic of "I'll give you free cigarettes, get you addicted, then sell more cigarettes" to explain the concept of the "free email box" - "I'll give you 2G of space, and when you run out of room, you'll have to pay."

Chua believes the organization has changed some North Koreans. In a conference in 2014, one of the members, Nils, shared his experience running a coffee shop in Shanghai. His speech inspired Park (pseudonym) to quit her job as a manger at a state-run company and open a coffee shop named Gum Rung in Pyongyang. The shop has a warm, pleasant ambience, with English on the menu and an advanced water filter system.

When Choson Exchange members took a tour in 2016 to Park's coffee shop, they found that each coffee was sold at $4-8. The price didn't deter foreigners or some local people from buying a cup, and the coffee shop has become a hot dating spot for young couples.

According to Chua's observations, even though North Korea is closed off, it's slowly developing.

When he first visited in 2008, Pyongyang was silent with only a few cars, with passengers that looked like actors. But now, it has become more like a normal city, with taxis everywhere.

"They are developing their own world. For example, their 'App Store' isn't a virtual one; one needs to go into a real 'shop' and the shop assistants help you install an app with a USB," Chua said.

Other foreign entrepreneurs, experts and managers who took part in the Choson Exchange also feel that North Korea is unique and North Koreans have their own ideas, including a thirst for knowledge.

"We need to understand local culture and local ways of thinking. We cannot treat North Korea as a whole," Chua said. "North Korea is too complicated a country to describe in one or two words."

Choson Exchange is also developing slowly. See told the Global Times that in order to commemorate Trump and Kim's meeting, they intend to establish a "612 Singapore Center" in North Korea. In 2014, they started to help training North Korean scientists on how to commercialize their research products, and even introduced the concept of the startup "incubator" to help North Korea innovate in technology.

The center does not simply introduce new technology to North Koreans, but also helps them as much as possible, on the basis of knowing what they need and want.

There are outside voices saying Kim's frequent public appearances are to prepare for North Korea's economic development. In Chua's view, since Kim came into power, North Korea's economy has developed. After Trump and Kim's meeting, Kim is most concerned with helping North Korea engage with East Asian society. "If this is achieved, then China and South Korea will surely invest in infrastructure construction," said Chua.

Even though it's still hard to say how much time it will take, Chua says he's looking forward to the result.