WORLD Singaporean scholar urges US to engage with China in dialogue

Singaporean scholar urges US to engage with China in dialogue

SINGAPORE, May 12 (Xinhua) -- The U.S. administration should try to engage with China in a respectful dialogue and find out where the differences between them and where they can collaborate, a renowned Singaporean scholar said recently. 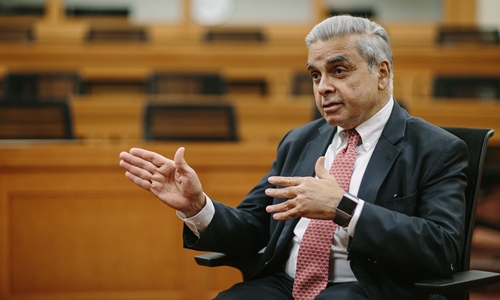 U.S. President Joe Biden's administration needs to have a U-turn and a reversal from former President Donald Trump's policies on China, which he described "clearly have failed in every sense of the term," said Kishore Mahbubani, a distinguished fellow at the Asia Research Institute of the National University of Singapore, in an interview with DBS Bank Ltd.

He said Trump's policies did not weaken China, strengthen the United States, or bring its friends in solidarity against China, so "obviously it is not in the interest of the Biden administration to carry on in an automatic fashion with Trump's policies on China."

In his opinion, the first thing for Biden administration to do is to remove sanctions and tariffs on China, which "have not helped the American workers and consumers."

He recalled his recent attendance at an Asia conference held in Harvard University with Harvard professors and some China watchers in the United States, saying when the Biden administration announced that it will not remove sanctions and tariffs on China, they said that is like threatening China by saying "if you don't listen to me I'll shoot myself in my foot again."

In dealing with Asian countries, public insults never help, the scholar said. The United States should know that "insulting China is not how we conduct international relations," he said.