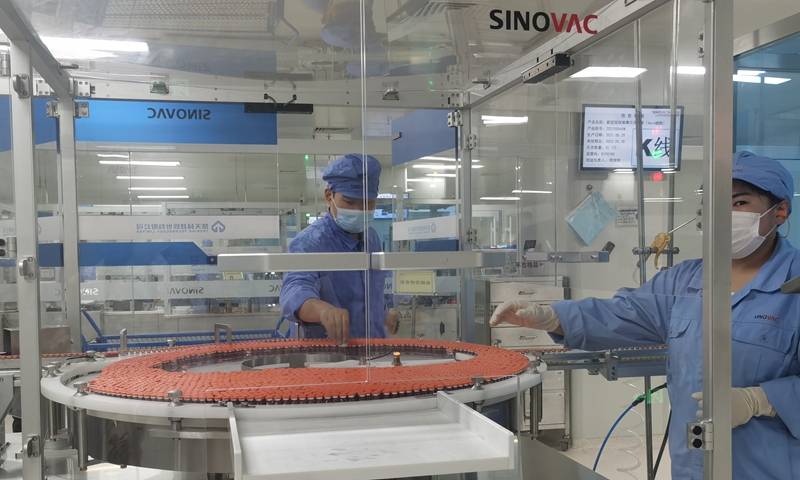 As the US keeps making promises without actual moves and India, a previous major global vaccine manufacturer, is struggling to fulfill their production contracts amid the serious domestic COVID-19 epidemic, China is taking the leading role to support the global anti-pandemic fight in expanding international supply as much as possible, providing reliable doses with impressive protection data.

The World Health Organization (WHO) on Tuesday greenlighted COVID-19 vaccine produced by China's Sinovac for emergency use, which is a prerequisite to become a provider for COVAX.

"Today, I'm happy to announce that the Sinovac-CoronaVac vaccine has been given WHO Emergency Use Listing after being found to be safe, effective and quality assured following two doses of the inactivated vaccine," WHO head Tedros Adhanom Ghebreyesus said at a press conference on Tuesday.

"Furthermore, the easy storage requirements of CoronaVac make it very suitable for low-resource settings. It is now the eighth vaccine to receive Emergency Use Listing by WHO. It's now crucial to get these lifesaving tools to the people that need them quickly," Tedros noted.

The decision further demonstrated that China not only has the willingness and the means to help in the global anti-pandemic fight, but the capability to do so, Feng Duojia, president of the China Vaccine Industry Association, told the Global Times on Tuesday.

Also on Tuesday, Chinese state-owned vaccine producer Sinopharm rolled out its first batch of COVID-19 doses prepared for the global vaccine sharing scheme COVAX in Beijing after the vaccine was approved by the WHO on May 7 for emergency use.

Sinopharm has made some improvements on the special batch for COVAX, including applying packaging all in English and designing a sticker called vaccine vial monitors (VVM) that could show temperature variations - Sinopharm is also the world's first producer that has attached VVM on COVID-19 shots, Zhu Jingjin, vice president of China National Biotec Group (CNBG), a subsidiary of Sinopharm that is responsible for the group's COVID-19 vaccine research and production, said at a ceremony to mark the first COVAX shots from China on Tuesday.

QR codes are on the outer packaging for international monitoring and supervision, and the company has improved the instruction information, according to Zhu.

China has promised to provide the COVAX scheme with 10 million shots of COVID-19 vaccines. Chinese companies are putting their best efforts into ensuring the delivery, Chinese Foreign Ministry Spokesperson Wang Wenbin said at a routine press conference on Tuesday.

"China will continue to support related companies in enhancing communication and coordination with the COVAX program and make China's contributions to securing an early victory in the global fight against the epidemic," Wang noted.

China had supplied a cumulative 300 million doses of COVID-19 vaccines overseas by mid-May, contributing to vaccine accessibility and affordability, especially in developing countries.

Sinovac, a major Chinese provider in the overseas market, has supplied 600 million doses of COVID-19 vaccines overall across 46 countries and regions including the domestic market upon regulators' approval as of Monday, the company revealed.

The company has distributed about 260 million doses to regions outside China while giving the domestic market about 340 million as of Monday, according to a Global Times calculation based on claims made by Sinovac that overseas supply accounts for three-quarters of its domestic supply so far.

To date, Sinovac has been inspected by seven international drug regulators from Indonesia, Brazil, Chile, Singapore, Saudi Arabia and the WHO. It has five production bases in China, which can achieve an annual capacity of 2 billion doses, and has issued local production authorization to more than five countries including Brazil, Turkey, Indonesia, Malaysia, and Egypt.

CanSinoBIO, the primary one-dose vaccine producer in China, has distributed more than 10 million doses globally so far, while securing more doses for high-risk areas, the Global Times learnt from CanSinoBIO on Tuesday.

Sinopharm has vaccinated more than 300 million doses globally, including in the Chinese mainland, the company told media at the end of May.

So far two Chinese vaccines have been greenlighted by WHO for emergency use.

Experts noted that in the future, more Chinese producers will obtain WHO approval and join the global anti-epidemic battle to display China's contribution and responsibility in the battle, which is vital to the world, while the US sits on piles of vaccine stock but turns a blind eye to the struggle, and the world's major vaccine producer India gets busy tackling its own deadly outbreak.

US President Joe Biden, heeding widespread calls to step up his response to the pandemic's surge abroad, said on May 17 that his administration would send 20 million doses of federally authorized COVID-19 vaccine overseas in June - the first time he has pledged to give away doses that could be used in the US, the New York Times reported.

That is in addition to the 60 million doses of AstraZeneca's vaccine he pledged last month, though those doses are not approved for domestic use and cannot be released until regulators deem them safe, the report said.

Meanwhile, India's largest vaccine producer the Serum Institute is struggling to meet domestic demand and says it will not be making doses available for export until the end of the year. The Indian government is aiming to ramp up production to cope with the pandemic, with a pledge to produce at least two billion doses between August and December this year, media reported.

"China is now the world's largest exporter of vaccines, especially for many developing countries. We are most moved by the fact that, although China has its own mandate to vaccinate 1.4 billion people, it still distributes some of its vaccines to other countries with similar needs," the ambassador of Ecuador to China, Carlos Humberto Larrea Dávila, told the Global Times on May 26, adding that "China should be an example for the international community."

With more and more places around the world starting to use and trust Chinese shots, the outstanding protection efficacy of the shots in various countries and regions revealed recently has refuted some Western media's long-existing smearing and doubts over China-made vaccines.

CoronaVac, the COVID-19 vaccine manufactured by Sinovac, showed impressive efficacy in preventing the SAR-CoV-2 variant discovered in Brazil as data indicates that deaths and hospitalizations caused by the virus in the town of Serrana, in the region of Ribeir?o Preto, decreased by 95 percent and 86 percent from February to April, after close to 60 percent of residents in the town were vaccinated.

The obvious protection rate in Serrana proves that the Sinovac's vaccine is effective against the mutant P1 strain that spread in Brazil. However, its effectiveness against the strain that was discovered in India - currently circulating in Guangzhou's latest outbreak - is still being studied, Sinovac's spokesperson told the Global Times.

Indonesia tracked 128,290 health workers in capital city Jakarta from January to March and found that the Sinovac vaccine protected 98 percent of them from death and 96 percent from hospitalization as soon as seven days after the second dose, Pandji Dhewantara, a Health Ministry official who oversaw the study, was quoted as saying by Bloomberg in a press conference on May 12.

According to the results of a study with 31,000 participants from more than 100 nationalities conducted in the UAE revealed on May 26, two COVID-19 vaccines developed by Sinopharm prevented symptomatic infections by 72.8 percent and 78.1 percent respectively.

Hungary, the only EU country that is using Chinese vaccines, said it plans to produce Sinopharm's COVID-19 vaccine in a local factory in a bid to help Hungary realize self-sufficiency in vaccine production from the end of 2022, Reuters reported.