WORLD Sisi sworn in as Egypt's president for second term

Sisi sworn in as Egypt's president for second term

President Abdel Fattah al-Sisi was sworn in on Saturday as the President of Egypt for a second term until 2022, state-run Nile TV reported. 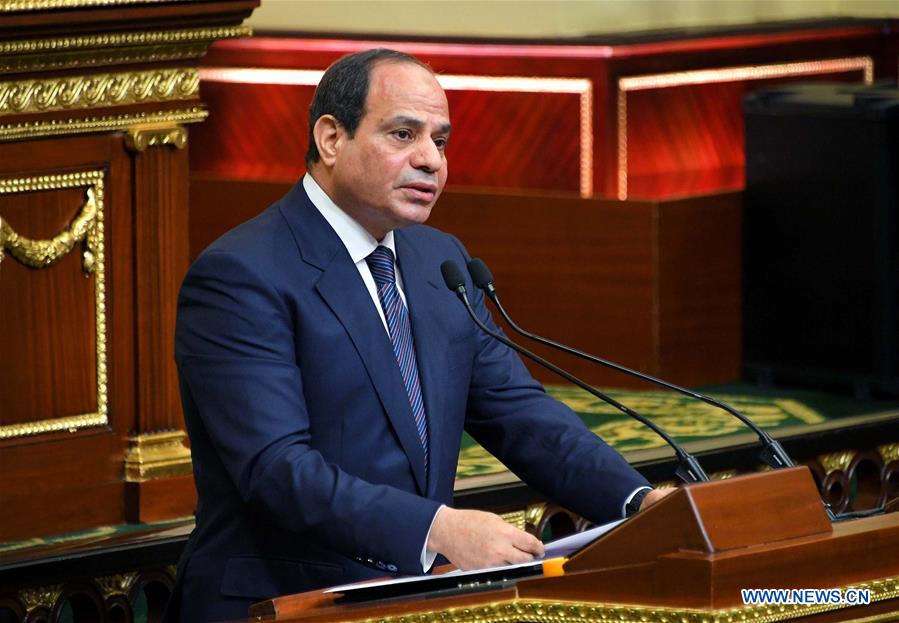 In a large ceremony held in the parliament, Sisi took the oath as president with the words "I swear to protect the republican system, to respect the constitution and the law, to safeguard the people's interests, and to preserve the independence of the nation and the unity of lands."

TV footages showed the parliament building, located in downtown Cairo, was decorated with Egyptian flags and people were waving for the president motorcade.

Ahead of the speech, the swearing-in ceremony started with the national anthem and a celebratory 21-gun salute.

"We managed to cross very difficult stage towards a future with more stability," the president said after taking the oath.

After focusing on the economic reforms in his first term, Sisi added he will give the priority in the coming four years to health and education issues.

"Education, health and cultural issues will top my priorities through launching a number of national mega projects and programs aiming at improving the living standards of the Egyptian citizens," the president said.

"Leading a country like Egypt is really great and difficult," he added in his speech to the nation.

The president reiterated that "Egypt will carry on its efforts for promoting the international ties in light of partnerships."

"The Egyptian state will constantly boost its balanced relations with all regional and international parties, within the framework of partnership and exchange of interests," he said.

Referring to the different segments and religious affiliations in Egypt, President Sisi said that "acceptance and creating a common ground among us will be my top priority in order to attain consistence, social peace as well as political development."

"I am a president for all Egyptians, those who agree with me and others who do not," he added.

"I will not exclude anyone from this common space except those who choose violence, terrorism and extremist thought as a way to impose their will," the president stressed.

Tariq Fahmy, professor of political sciences with American University in Cairo, said the president's speech constitutes "a work plan for the coming term, because it included several pillars that will be the base for the government's performance in the following four year."

In the speech, the president attempted to send a significant message that he will focus more on the issues that are important to the citizens' daily lives like education, health, culture and social protection, Fahmy told Xinhua.

The expert believes that President Sisi will give more attention to social cohesion after economic reforms were adopted in the first term.

The speech, despite short, has also pointed out that economic reform and fighting terrorism, the country's two major endeavors of the last four years, will be advanced as main approaches for strengthening stability of the country, the expert reiterated.

Sisi won his second term with 97 percent of the votes in Egypt's 2018 presidential election.

His first oath was performed at the Supreme Constitutional Court in 2014.

The last presidential inauguration held at Egypt's parliament was in 2005, when ousted President Hosni Mubarak was sworn in as president for the fifth and the last time.