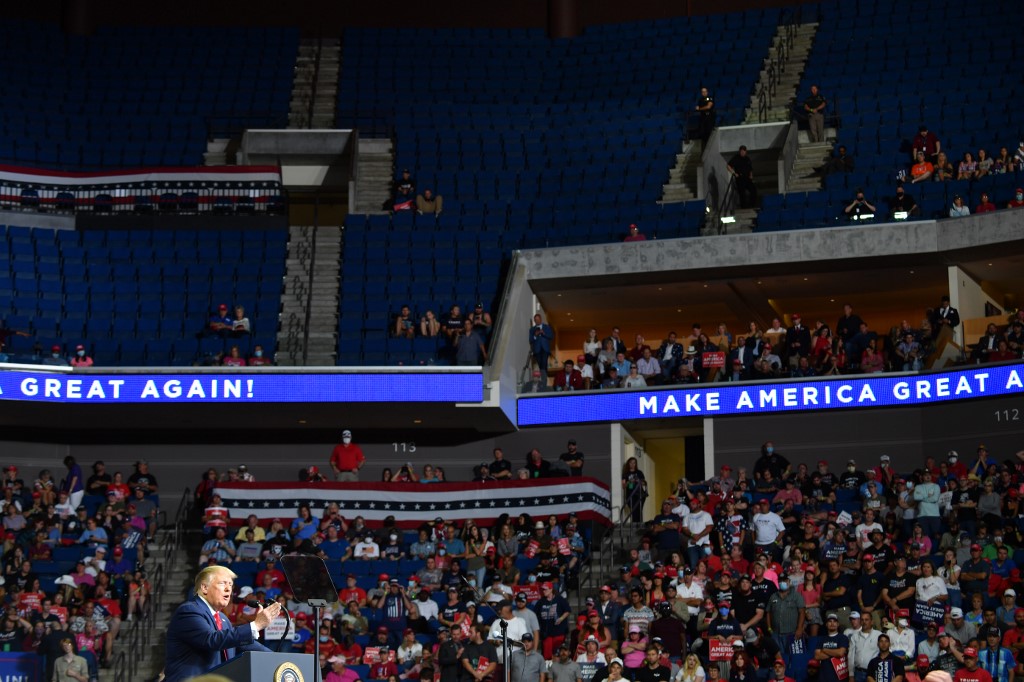 The upper section of the arena is seen partially empty as US President Donald Trump speaks during a campaign rally at the BOK Center on June 20, 2020 in Tulsa, Oklahoma. (Photo: AFP)

Hours before U.S. President Donald Trump is expected to appear at the rally in Tulsa, Oklahoma, his campaign communications director Tim Murtaugh said in a statement that "per safety protocols, campaign staff are tested for COVID-19 before events. Six members of the advance team tested positive out of hundreds of tests performed, and quarantine procedures were immediately implemented."

"No COVID-positive staffers or anyone in immediate contact will be at today's rally or near attendees and elected officials," he said.

Critics, including Tulsa city officials, had already expressed concern that the event – at a venue with a capacity of 20,000 – would increase potential risks of getting infected and violated guidelines issued by the U.S. health authorities.

The Tulsa city-county Health Department Director David Bart had expressed his wish that the event would be postponed as the state recently reported its largest single day increase in coronavirus cases since the start of the outbreak.

According to the Oklahoma State Department of Health, Tulsa County reported the most cases – 2,206 total – of any county in the state as of Saturday afternoon.

However, Trump has been consistently critical of lockdown measures and urged to reopen. Though Trump's campaign team said they will take every precaution to keep rallygoers safe, including body temperature checking, providing face masks and hand sanitizer, attendees will not be required to wear a mask at the rally.

He told reporters earlier in an interview that rallygoers can choose whether to wear masks. "I recommend people do what they want."

Those attending Saturday's event will have to sign a disclaimer to ensure the president will not be held liable if they contract the virus.

"By attending the Rally, you and any guests voluntarily assume all risks related to exposure to COVID-19 and agree not to hold Donald J. Trump for President, Inc.; BOK Center; ASM Global; or any of their affiliates, directors, officers, employees, agents, contractors, or volunteers liable for any illness or injury," the disclaimer reads.

One supporter, who gave her name as Jody while waiting in line with her five-year-old son dressed as a mini-Trump, said she would be wearing a mask but expected that many others would not.

"I wish people would wear them, but you can't force people to do something they don't want to do," she said.

The U.S. remains the country worst hit by the pandemic, having recorded 119,460 deaths from more than 240,000 registered cases. The world's largest economy is taking a beating in a year when Trump seeks re-election.