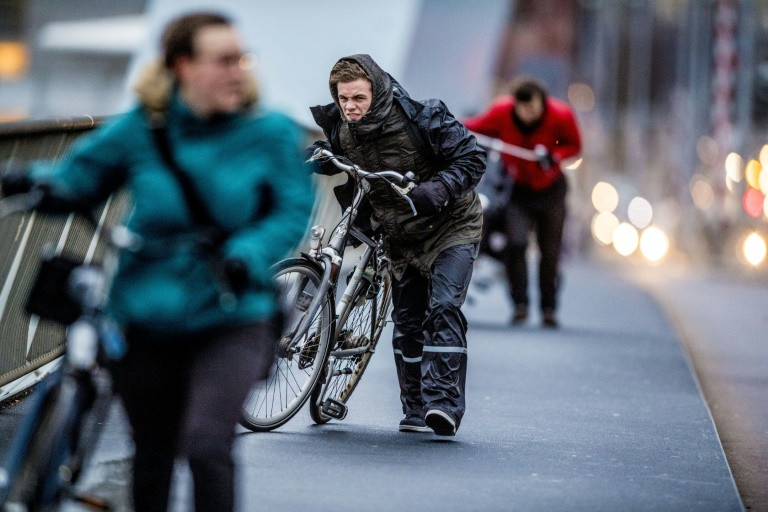 The Netherlands bore the brunt of the storms early on Thursday. Photo: AFP

Germany halted all long-distance rail traffic for at least a day, while numerous domestic flights were scrapped as hurricane-force winds lashed the country.

A 59-year-old man was killed instantly when a tree fell on him in North Rhine-Westphalia state, German police said, as wind speeds attained a high of 203 kilometres an hour (126 mph) at the Brocken -- the highest peak of northern Germany.

Another man, a 68-year-old truck driver, died in a traffic accident also in the western German state caused by the ferocious storm, while a firefighter lost his life as he was hit by a fallen tree in central Germany's Bad Salzungen.

The strong gales also forced the cancellation of a ski world championship qualifier at Oberstdorf, in the Bavarian alps.

In the Netherlands, which had borne the brunt of the severe winter storms earlier Thursday, two people were crushed by falling trees as bitter winds barrelled off the North Sea to hit the low-lying country with full force.

As the national weather service raised its warning to the highest code red level, a 62-year-old man was killed in the central Dutch town of Olst by a falling branch when he got out of his truck to remove debris blocking the road. 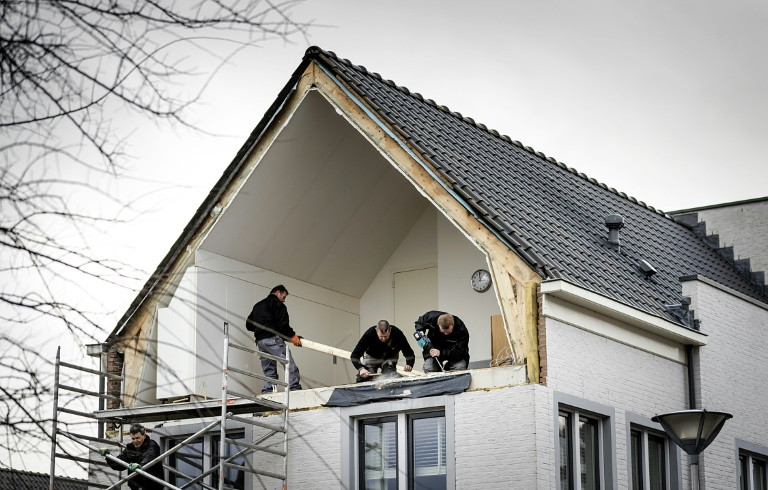 A second Dutchman, also 62, was killed in eastern Enschede when a tree toppled onto his car, the Dutch news agency ANP said.

In neighbouring Belgium, a woman driver reportedly died when her car was crushed by a tree as she was travelling through a wood in the Grez-Doiceau area, about 35 kilometres south of Brussels.

Amsterdam's Schiphol airport, one of the continent's busiest travel hubs, was forced to briefly cancel all flights as winds gusted up to 140 kilometres an hour in some areas.

Flights later resumed but all passengers were being advised to check their flight status, the airport said in a tweet, adding "up until now, 320 flights have been cancelled".

The airport also had to close the entrances to two of its three departure halls when some roof tiles were whipped off the terminal building.

"Fire department staff were there to help and assist, because it was not safe," airport spokeswoman Gedi Schrijzer told AFP, adding there had not been any injuries.

The Dutch national railway company NS announced that "due to the storm all trains are halted until further notice" apart from small local services.

Thalys, the high-speed train operator, suspended services to the Netherlands and Germany.

One Thalys train heading to the Netherlands from Brussels was stopped at Antwerp and all passengers told to disembark and wait for at least two hours, an AFP reporter on board said.

By late afternoon there were still no trains running across the Netherlands, even though the code red weather warning had been lifted.

Frustrated passengers packed into stations, desperately hoping to find a way to travel, with trams and buses also badly disrupted. Many school children had been left without public transport to get home.

The Dutch national traffic service the VID said over two dozen large lorries had been toppled by the gale-force winds.

Four people were injured in Antwerp, including one woman who was seriously hurt after being hit in the head by flying metal debris, the Belgian news agency Belga said.