Six people were killed and the mayor of Mogadishu was wounded on Wednesday in a suicide bombing in the Somali capital, claimed by Islamist militants and targeting the UN's envoy. 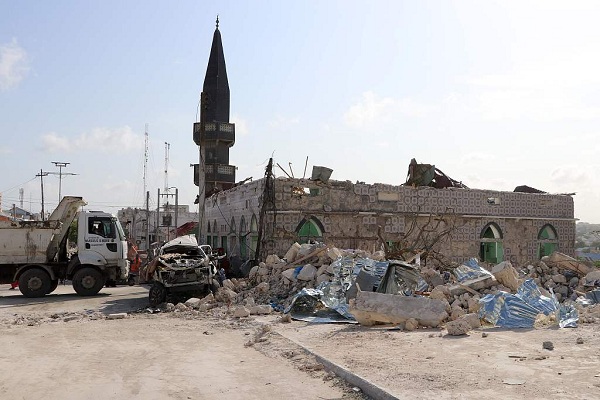 A view of a mosque damaged following a car bomb in the vicinity of the Somali parliament in Mogadishu on June 15, 2019. (File Photo: VCG)

The bombing, at municipal government headquarters in Mogadishu, was the latest of many such attacks.

"We conducted a successful operation in Mogadishu this afternoon," Abdiasis Abu Musab, spokesperson for the Al Qaeda-linked group al Shabaab, which aims to topple Somalia's UN-backed government, said in a statement sent to Reuters.

"The target was the newly appointed U.N. envoy to Somalia and other senior enemy members. Some of them were eliminated, others wounded," he added.

The United Nations envoy, James Swan, had paid a visit to the mayor, Abdirahman Omar Osman, earlier on Wednesday, but left just before the blast, according to the Twitter feed of the UN assistance mission in Somalia.

As well as the mayor, five others, including district commissioners, were injured in the blast.

"A suicide bomber walked into the meeting hall and blew up himself," Mohamed Abdullahi, a relative of one of the victims, told Reuters. The area was filled with ambulances after the blast, shopkeeper Mohamed Osman said.

Security forces are investigating the incident.

Swan, confirming he had been in the building earlier in the day, said in a statement: "I deplore this heinous attack which not only demonstrates a violent disregard for the sanctity of human life, but also targets Somalis working to improve the lives of their fellow Somalis in the Mogadishu-Banadir region."

Mogadishu is regularly hit by attacks by the Shabaab, which has fought for more than a decade to topple the Somali government.

The city was on Monday struck by a car bomb that left 17 dead and more than two dozen wounded.