One day after the blaze that scarred Notre-Dame, President Emmanuel Macron addressed a nation in shock at the damage to one of its great cultural landmarks, with a promise that rang as clearly as the peal of the cathedral's bells. 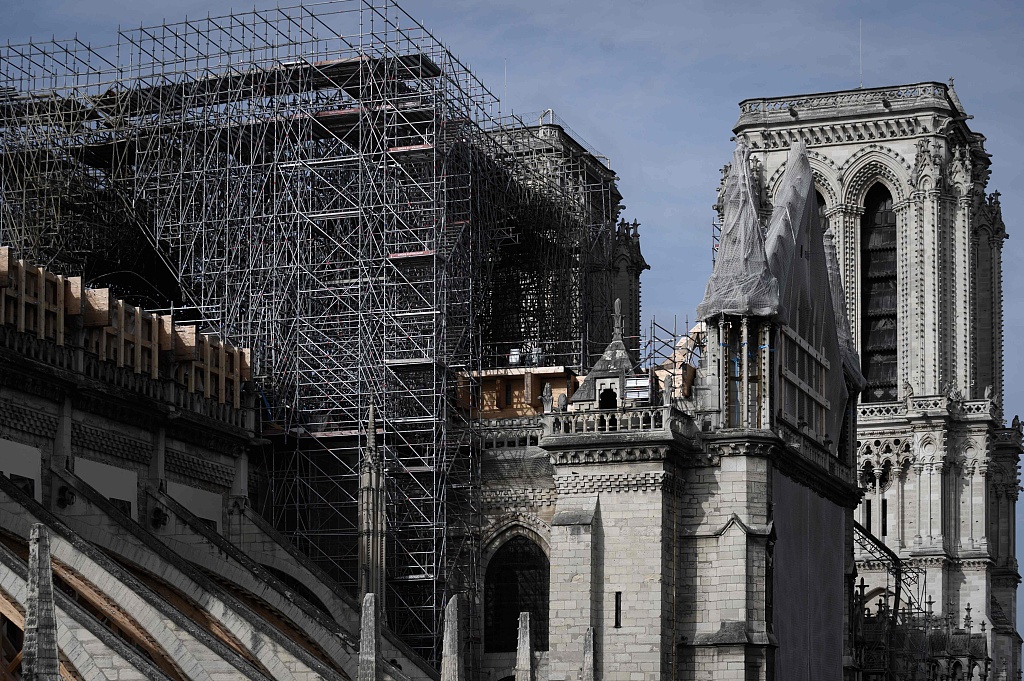 "We will rebuild the cathedral even more beautifully and I want it to be finished within five years," Macron said on national television on the evening of April 16, 2019.

But six months after the April 15 fire that tore through the roof of the 13th-century Paris cathedral and toppled its spire, the reconstruction process is shaping up to be much more complex than many anticipated.

Workers have had to clean up significant quantities of lead that melted from the roof and contaminated areas around the cathedral, with critics saying the authorities were slow to warn the public of the risks.

There remains no consensus on how the cathedral should look after reconstruction, with many experts wanting the spire to be rebuilt exactly like the original, and Macron arguing for an innovative solution.

Above all, the process of securing an edifice still at risk of collapse after the fire damage has taken precedence over any reconstruction.

It is only at the end of 2020 that a complete check will allow architects to work out how to restore the cathedral. No reconstruction is expected to start before 2021.

Macron's five-year goal would see the cathedral's reconstruction completed in the spring of 2024, before Paris hosts the Olympic Games that year.

The top priority is to eliminate any risk to the vaulted ceiling, with the main danger coming from 500 tonnes of scaffolding that was erected around the fire for renovation work before the blaze.

The damage caused by just a single bar of scaffolding falling could prove irreparable, and the work to remove the structure will take several months.

"This is not scare-mongering. It is a physical reality," said Christophe-Charles Rousselot, director general of the Fondation Notre-Dame, the charity that is overseeing the gathering of donations to the cathedral.

With regards to the spire, a late addition to the mediaeval cathedral designed by the 19th-century French architect Eugene Viollet-le-Duc, many see it as an integral part of the building.

"It needs to be rebuilt as it was before," said Philippe Villeneuve, the architect in charge of restoring the cathedral, arguing that the sheer power of the spire integrated it with the mediaeval church.

His is backed by Viollet-le-Duc's descendants and, according to opinion polls, the French public.

But the government has left open the possibility of an international competition for architects to design something new.

Experts are also intensively researching the precise original architecture of the cathedral, so that when reconstruction begins it is as accurate as possible.

"Before 2010, we only have old-style surveys, plans that have been redrawn on numerous occasions which are very partial and very imprecise," said Remi Fromont, one of the architects responsible for the site who is working on drawing up accurate plans.

Andrew Tallon, a Belgium-born scholar who died aged 49 in November 2018, carried out hugely valuable laser scans of the interior in 2010 that have proved an even more valuable legacy than he could have imagined.

"We know that we will have shortcomings. Not all the chapels were systematically scanned. There are still areas of doubt," Fromont said.

In the aftermath of the fire, private individuals and above all rich French cooperations rushed to pledge hundreds of millions for the rebuilding of the cathedral.

There were concerns whether this funding would ever be realised.

But France's richest man Bernard Arnault in September signed a formal accord over his pledge of 200 million euros ($220 million), as did the Pinault family for their promised 100 million euros.

A signing on another 100 million promised by the oil giant Total is awaited in October.

The consortium of fundraising groups behind the drive believes that 800 million euros ($890,000) can be raised in total, with over 616 million euros now either transferred or pledged.

But lovers of the historic masterpiece, be they tourists, architecture buffs or worshippers, may have to wait some time before Notre-Dame becomes theirs again.

"I have felt myself orphaned, it is like being in mourning," said Michele Chevalier, 70, a regular at Notre-Dame who was at the service when the first evacuation took place.

"I still manage to pray, but it's not the same."