South Korean President Moon Jae-in said Friday he will pardon his chief conservative rival and predecessor, Park Geun-hye, who is serving a lengthy prison term for bribery and other crimes. 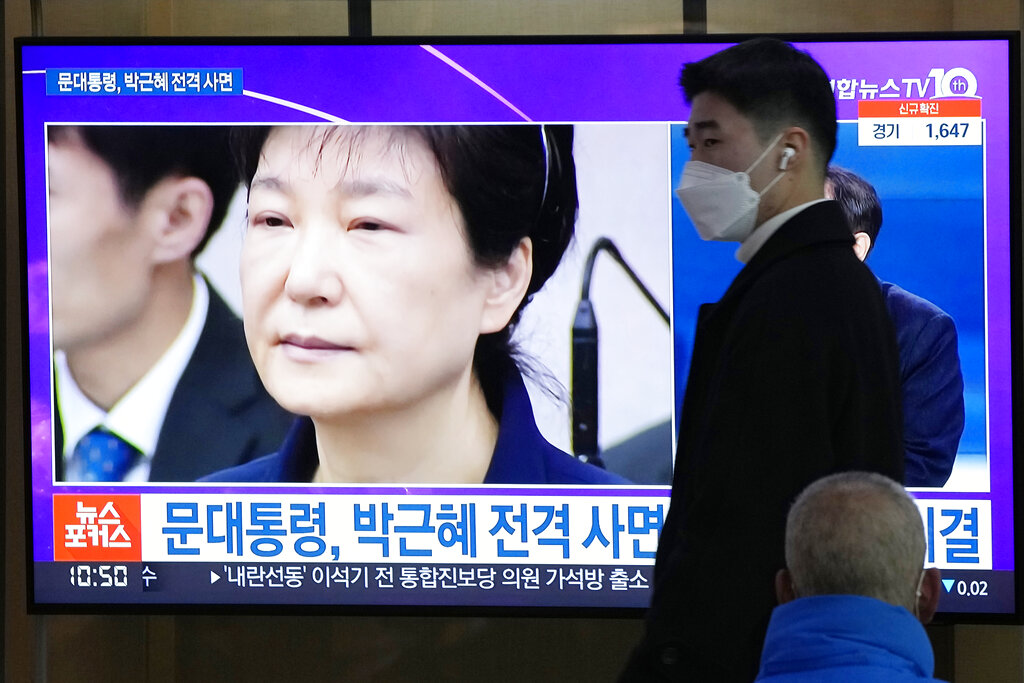 Moon's liberal government said the pardon is meant to promote national unity in the face of difficulties brought by the pandemic. Some observers say Moon may want to ease conservative criticism stemming from Park's health problems, or even use her to split the opposition ahead of a presidential election in March.

"We should move into a new era by getting over the pains of the past. It's time to boldly pull together all our strengths for the future rather than fighting against each other while being preoccupied with the past," Moon said in remarks released by his office.

"In the case of former President Park, we considered the fact that her health condition has deteriorated a lot after serving nearly five years in prison," he said.

The Justice Ministry said the 69-year-old Park is among 3,094 people who are to be pardoned on Dec. 31. South Korea often grants special pardons to mark New Year's Day or national holidays.

Park has been treated since last month in a hospital, from where she will be released, the ministry said. Officials refused to elaborate on Park's health, but local media said she has been suffering from a lumbar disc, a shoulder injury and dental problems as well as mental stress.

In comments released by lawyer Yoo Young-ha, Park thanked Moon for pardoning her and said she will focus on treating her illnesses. She said she wants to offer her greetings to the people at an early date.

Park, a daughter of assassinated dictator Park Chung-hee, was once the darling of conservatives in South Korea. Dubbed by local media as "the queen of elections," she won election as South Korea's first female president in late 2012 by beating Moon, then a unified liberal candidate, by a million votes. Park was propelled by conservatives who celebrate her father as a hero who pulled the country up from postwar poverty despite his suppression of human rights.

She was impeached by lawmakers in late 2016, and was formally removed from office and arrested the following year over an explosive corruption scandal that prompted months of massive street protests.

In January, the Supreme Court upheld her 20-year prison term. If she hadn't been pardoned, she could have served a combined 22 years behind bars because she was separately convicted of meddling in her party's nominations of candidates ahead of parliamentary elections in 2016.

Park has described herself as a victim of political revenge. She has refused to attend her trials since October 2017.

Among the main charges she faced was collusion with her longtime confidante, Choi Soon-sil, to take millions of dollars in bribes and extortion from some of the country's largest business groups, including Samsung, while she was in office.

Park's scandal led to the arrests, indictments and convictions of dozens of high-profile figures. Choi is serving an 18-year term. Samsung scion Lee Jae-yong was initially sentenced to five years in prison before his term was reduced and was eventually released on parole in August.

Park was succeeded by Moon, who easily won a special presidential by-election while the conservatives were in disarray amid fierce internal feuding over Park's ouster.

Moon's single five-year term ends in May and he is barred by law from seeking reelection. Recent public support surveys show candidates from the governing and conservative opposition parties running neck and neck.

It wasn't immediately clear how Park's pardon will affect voter sentiment. It could cause a backlash from the liberals, but some observers say it may also rekindle a division in the opposition camp.

"Even if the presidential Blue House may have impure intentions to influence the results of the presidential election with the pardon of ex-President Park Geun-hye, it's something that we opposition forces should address," Kim Jae-won, a senior member of the People Power Party, wrote on Facebook. "United we stand and divided we fall."

Moon's office said Park's pardon has nothing to do with the presidential election.

"Moon may be accused of trying to influence the next election, but releasing a predecessor from prison has precedent in Korean politics," said Leif-Eric Easley, a professor at Ewha University in Seoul.

"Now that staunch conservative and progressive candidates are set for the March 2022 election, this move is unlikely to change their positions or the public's opinion of them," Easley said.

Almost all South Korean former presidents, or their family members and key associates, have been mired in scandals near the end of their terms or after they left office.

Park's father was assassinated by his spy chief in 1979 after a 18-year rule. Moon's friend and former President Roh Moo-hyun jumped to his death in 2009 amid corruption investigations involving his family.

Two other former presidents, Chun Doo-hwan and Roh Tae-woo, spent time in prison but were later pardoned. Both died this year.

Those to be pardoned with Park on Dec. 31 include ex-Prime Minister Han Myung-sook, one of Moon's former political allies, who served a two-year prison term on corruption charges. The government will reinstate her civil rights so she can run in elections or cast ballots.

Separately, former leftist lawmaker Lee Seok-ki, who has been serving a more-than nine-year prison term for plotting a pro-North Korea rebellion and other charges, was released Friday on parole. Lee was arrested when Park was in office. He was affiliated with a now-disbanded small progressive party.