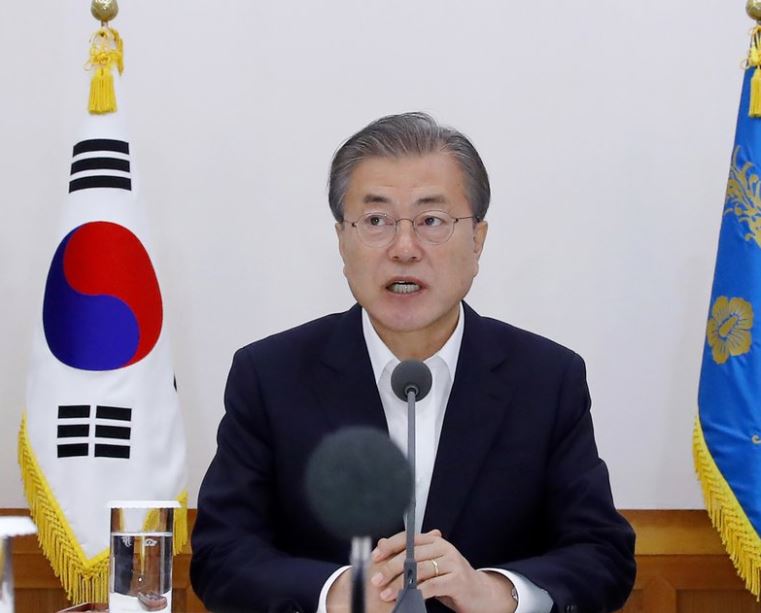 The issue has become a full-blown diplomatic dispute between the neighboring US allies.

In a meeting with South Korean business leaders at Seoul’s presidential palace, Moon said his government was committed to resolving the matter diplomatically and urged Japan to refrain from pushing the situation to a “dead-end street.”

Tokyo last week tightened the approval process for Japanese shipments of photoresists and other sensitive materials to South Korean companies, which need the chemicals to produce semiconductors and display screens used in TVs and smartphones.

Japanese officials say such materials can be exported only to trustworthy trading partners, hinting at security risks without citing specific cases. Tokyo hasn’t elaborated but Prime Minister Shinzo Abe and his conservative aides have hinted there may have been illegal transfers of sensitive materials from South Korea to North Korea.

South Korea, which has an export-reliant economy, sees the Japanese trade curbs as retaliation for South Korean court rulings that ordered Japanese firms to compensate aging South Korean plaintiffs for forced labor during World War II and plans to file a complaint with the World Trade Organization.

Moon spoke hours after South Korean officials told a WTO meeting in Geneva that the Japanese measures would have repercussions for electronics products worldwide and called for their withdrawal.

″(Our) government is doing its best to resolve the issue diplomatically. ... (I call for) the Japanese government to respond. It should no longer walk straight toward a dead-end street,” Moon said in a meeting with senior executives from 30 of South Korea’s biggest companies, including the Samsung, Hyundai and SK conglomerates.

“The Japanese government’s move to inflict damage on our economy to serve political purposes and link (the issue) with sanctions against North Korea without any evidence is surely not ideal for the friendship and security cooperation between the two countries,” Moon said.

He called for the government and private companies to form an “emergency response system” to deal with the impact of the Japanese trade curbs and prepare for the possibility that the dispute drags over an extended period.

Analysts say the Japanese measure won’t have a meaningful impact immediately on South Korean chipmakers Samsung Electronics and SK Hynix, which both have sufficient supplies of the materials for now, given the slowdown in demand for semiconductors.

But there’s concern that Japan might expand the restrictions to include other sectors. Shin Hak-cheol, the CEO of LG Chem, a major producer of batteries for electric cars, told reporters on Tuesday the company was planning for possible restrictions on battery materials.

Japanese officials have rejected any link to historical disputes. They also have continued to add new reasons for the controls, from lack of trust to national security, and most recently South Korea’s alleged failure to attend export control talks. Japanese trade minister Hiroshige Seko told reporters Tuesday that South Korean officials haven’t responded to requests for talks for three years, and a Foreign Ministry official on Wednesday cited Seoul’s “failure to maintain regular inter-authority consultation, in spite of Japan’s repeated requests” as a key reason for Japan’s decision.

South Korea has summoned a Japanese Embassy official to protest Abe’s suggestion that it could not be trusted to faithfully implement sanctions against North Korea. South Korea’s trade minister on Tuesday said an inspection of companies that process and export the chemicals imported from Japan found no sign of illegal transactions allowing them to reach North Korea or any other country affected by UN sanctions.

At the meeting of the WTO Goods Council in Geneva on Tuesday, South Korean Ambassador Paik Ji-ah said South Korea was the only country affected by Japan’s trade curbs, and expressed concerns that Japan was also reviewing whether to further tighten trade measures, according to a Geneva-based trade official who relayed the ambassador’s comments in the closed-door meeting. Paik declined to speak to reporters after the meeting.

Japan’s envoy in Geneva, Junichi Ihara, countered that the Japanese measures were just a “change of application of procedures.”

“We applied the simplified procedures before to Korea, but now we changed, and just normal procedures will be applied — are applied — to (South) Korea. ... So this is perfectly in conformity with our obligations to the WTO,” he said.