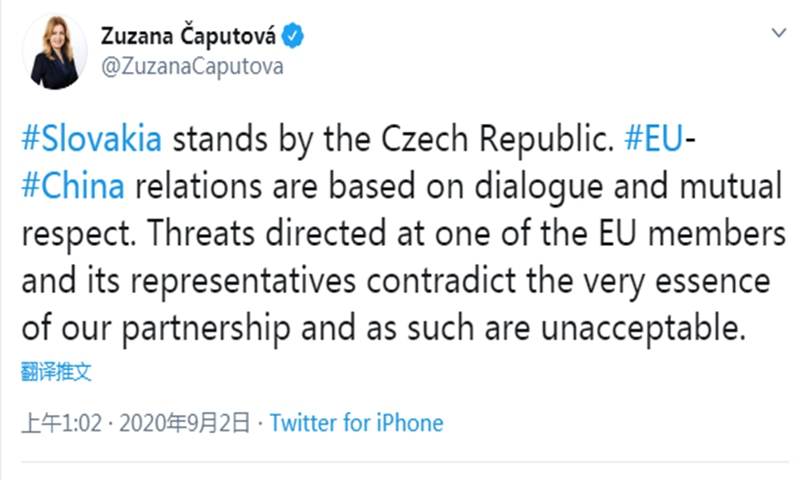 China's determination to safeguard national sovereignty is unwavering, and its relations with the EU will not be swayed by some European politicians who voiced support for Taiwan island visit, something strongly opposed by China and widely seen as breaching the one-China principle, observers said.

The Czech politician, disregarding the opposition of China and the Czech government, paid a visit to the island of Taiwan starting Sunday to support Taiwan secessionists, and even instigated other foreign countries to follow suit, which is blatant provocation, Chinese State Councilor and Foreign Minister Wang Yi said at a Tuesday press conference during his visit to Europe.

After Wang reiterated China's stance on the Taiwan question, Caputova tweeted that Slovakia stands by the Czech Republic, calling China's firm response to Vystrcil's visit "unacceptable." She called on "dialogue and mutual respect" between China and the EU, but failed to mention who first provoked the situation.

Analysts stressed that since respect is mutual, it is important to remember who first provoked and who responded, and China will not hesitate to safeguard its sovereignty and core interests.

They also noted that some politicians' words and actions are meant to amplify their personal influence, and will not affect the basis and "big picture" of China-EU ties.

Li Haidong, a professor at the Institute of International Relations of the China Foreign Affairs University, told the Global Times on Wednesday that Vystrcil's high-profile visit to the island of Taiwan, given the split in Czech politics, is  motivated for political capital.

The visit to the island of Taiwan, which comes at a time of severe China-US tensions, will inevitably win him supporters from anti-China forces in Europe. The complexity of European politics may even encourage more politicians to follow suit, Li said.

Analysts warned that European countries should be diplomatically autonomous and make choices in their own interest, rather than dance to the US tune.

Noise from a handful of politicians will not shake the basis of China-EU relation, Li said, noting that responsible leaders will have a pragmatic attitude on China and respect the one-China principle, a prerequisite and political basis for the maintenance and development of friendship and cooperation between China and other countries.