WORLD Slovenians strive to live in peace with bears

Slovenians strive to live in peace with bears 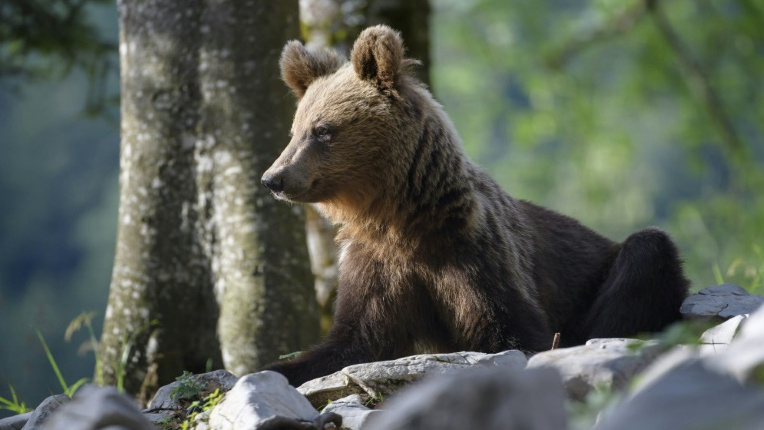 When he used to go hunting, Miha Mlakar would dream of killing a bear. But today the 33-year-old from Slovenia makes his living watching the animals, peacefully, in their natural forest environment.

The turnaround to shooting bears with a camera, not a rifle, puts Mlakar, who runs bear observation tours, in step with wider efforts in the small Alpine nation to promote the coexistence of humans and bears.

Once on the verge of extinction, Slovenia's brown bear population is booming, with the number roaming the sprawling forests having doubled in the last decade to around 1,000.

As a result, encounters with bears have increased -- not that it seems to unduly worry everyone.

"If you run into a bear, you have to step back... (But) there is no danger. The bear also prefers to move away," Ljubo Popovic, a 67-year-old pensioner who lives in the village of Banja Loka in the southern Kocevje region, told AFP.

Lying an hour to the west, near Markovec village, Mlakar has built 20 hides in a remote patch of forest reachable only by off-road vehicle and takes visitors, including foreign tourists, to observe the bears.

"I cannot imagine this forest without bears. Bears make the forest wild and pristine, natural, like it was a few hundred or thousand years ago... I feel a connection with bears," he tells AFP.

Slovenian bears are even sought after abroad.

Between 1996 and 2006, eight Slovenian bears were released in the French Pyrenees, and France currently has a population of about 40 bears, whose presence divides opinion in regions where they live.

In Slovenia, more than 60 percent of respondents in a 2016 survey carried out in areas where bears live said they were in favor of the bears' presence, even if many also said they would like to see the numbers regulated.

"We have an average of one to three cases of physical contact between bears and humans per year," Rok Cerne, of the Slovenia Forest Service in charge of wildlife, told AFP.

"Fortunately, we haven't registered any serious incident over the last years," he added, stressing they were "very active in preventive measures".

Removing food sources that could attract bears has been one such step.

In villages close to bear habitats, local authorities have replaced regular plastic waste and compost bins, which can be easily opened or flipped by the animals, with containers protected by heavy metal cages.

Meanwhile, damage to cattle from bear forays has remained stable, at up to 200,000 euros ($231,500) a year, despite the bear population increasing, Cerne said.

Farmers are entitled to an 80-percent subsidy for using electric fences to protect flocks and the loss of cattle due to bears is compensated.

If a bear becomes a habitual visitor to a village, special intervention groups step in to kill or relocate the animal with the help of local hunters.

Slovenia's approach could inspire neighboring Romania, home to about 6,000 bears or 60 percent of Europe's estimated bear population, where tourists to villages in the Carpathian Mountains often post pictures online of bears waiting to be hand-fed.

Bears rummaging through waste containers on the outskirts of cities, such as Brasov in central Romania, have become a common sight.

And on a central motorway construction site, workmen have christened a regularly spotted sturdy male bear Van Damme after the Hollywood star.

Beyond tourists' anecdotes, however, Romania has seen a "growing number of attacks" by bears, highlighted in a conservation plan published last month that recommends hunting to keep numbers at optimum levels.

Use of reinforced bins, as well as a proposal for building work to be limited in regions where bears live, are also included in the government plan.

Since the beginning of last year, 31 people, mostly shepherds, have been attacked, one of them fatally.

Meanwhile, some 940 forays by bears into populated areas were registered last year, including attacks on sheep flocks and entry into gardens; so far this year, the figure is 120.

But environmental campaigners fear that "hunting will be the main instrument to keep bear populations under control" when other measures could work, said Livia Cimpoeru, of the WWF Romania.

The government has proposed 4,000 bears as the ideal number in the country of 20 million people.

Learning simple rules, such as how to avoid startling bears and not feeding them, as well as efficient management like accurate counting to ascertain trends, is crucial for reducing conflicts with humans, said Mareike Brix, of German-based EuroNatur foundation.

"There is a risk, and there can be problems... But it's also great (to have bears). Wild nature has become so rare in Europe," she told AFP.