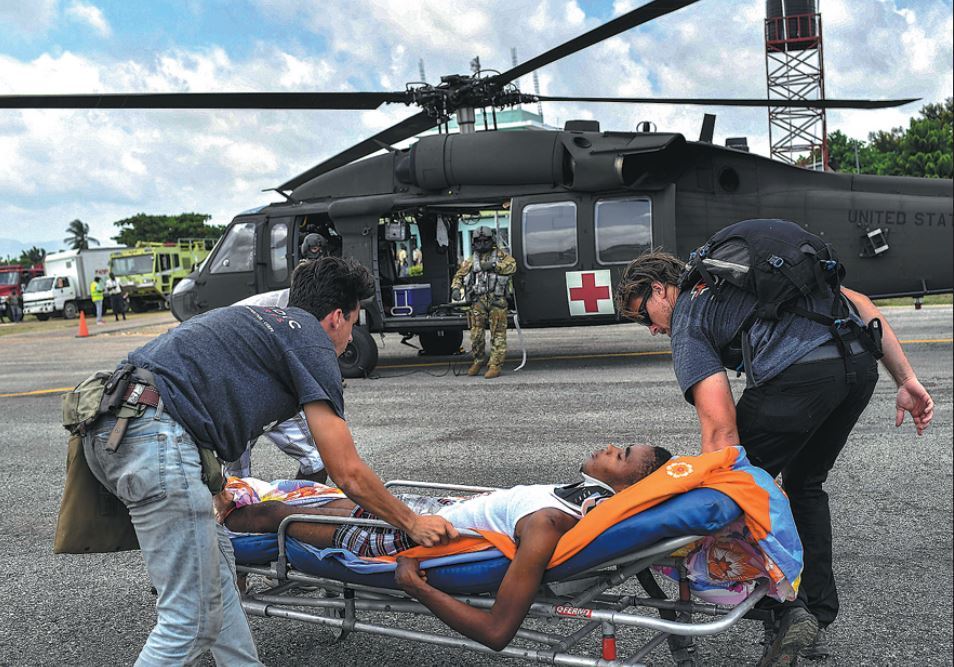 Rescuers transfer a survivor to a US Army helicopter at the airport in Les Cayes, Haiti, on Saturday, a week after a 7.2 magnitude earthquake hit the area. (Photo: AP)

Motorcycles are now the only vehicles able to quickly and efficiently traverse the often muddy or flooded roads leading to the remote communities in the south of this city following the 7.2-magnitude earthquake that hit the island on Aug 14.

The terrain and limited means of transport have rendered delivery of already scarce aid difficult.

Hector Mendez, a member of Mexico's Topos Azteca Rescuers Association, has been waiting for the arrival of funds that will allow him to travel with six other rescuers to Haiti.

His team, which includes 10 foreign nurses, aims to provide scarce medical supplies that could prevent the need for amputations among the thousands of Haitians injured in the quake.

Mendez said he was surprised that few of the quake-hit areas have received international support from groups, especially since dozens of global organizations and foundations are supposedly already in Haiti.

However, in downtown Les Cayes or neighboring communities, rescuers are hardly seen working through the rubble to find victims or recover bodies.

Instead, locals scavenge through the ruins for what building materials they can find to sell or use to rebuild their own houses.

To meet the most urgent need of suffering Haitians, the Ayiti Community Trust, a local relief organization, is raising funds to help quake-hit families in remote, inaccessible areas with reconstruction.

Guerda Nicolas, a member of the organization, visited Lievre, a rural community that suffered a lot of material damage but few deaths.

Most residents in Lievre leave their homes at 4 am to work in the fields and rarely return until the end of the day, he said.

Had the earthquake, which struck at 8:29 am local time, occurred at another time, many more people would have died, he said

The official death toll from the earthquake stands at 2,189 people, and an estimated 332 people are said to be missing. Residents in towns across the southern rural countryside are still digging for bodies believed to lie under rubble.

Tens of thousands of homes are in ruins, leaving many families with no option but to sleep outside despite torrential downpours at night.

The United Nations children's agency, UNICEF, said its first shipment of 9.7 metric tons of medical and water and hygiene supplies arrived in the capital, Port-au-Prince, on Friday, and a further 30 tons of supplies is expected to land in coming days.