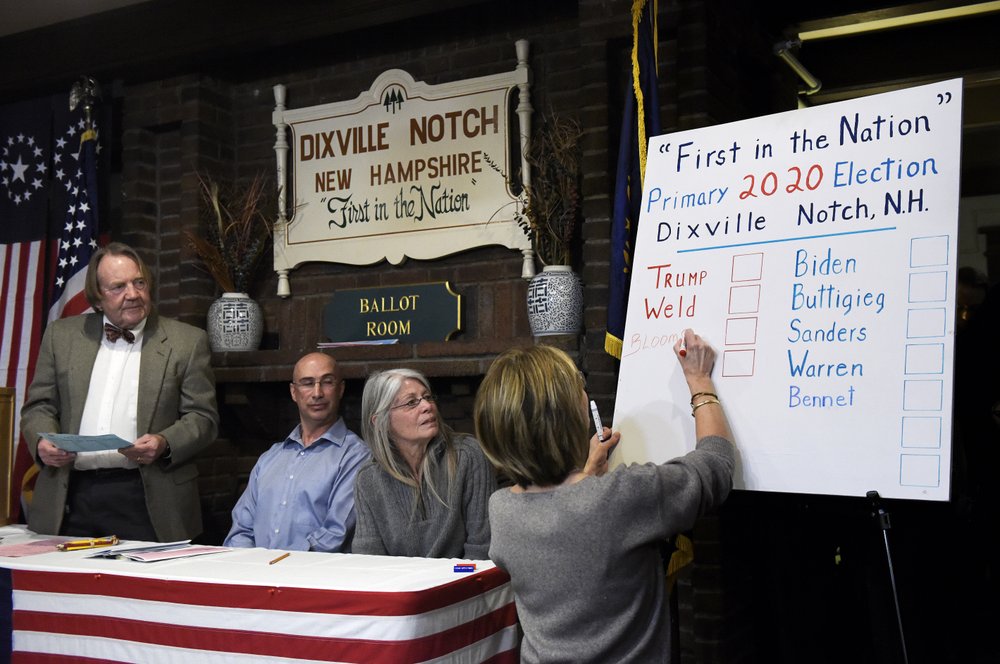 Former New York City Mayor Michael Bloomberg, who is not even on the ballot, won the votes of a tiny New Hampshire community that barely hung onto its tradition of being among the first to make their picks in the presidential primary.

Dixville Notch’s five residents cast their ballots just after the stroke of midnight Tuesday in the first 2020 presidential primary vote in the nation.

Bloomberg received three write-in votes, one from a Republican and two from Democrats. The remaining votes went to Pete Buttigieg and Bernie Sanders.

Polls opened later Tuesday in the rest of the state, some as early as 6 a.m. The first-in-the-nation presidential primary follows last week’s Iowa caucuses, which was plagued by technical issues that left both Bernie Sanders and Pete Buttigieg claiming victory.

The small community, located near the Canadian border, had been in the spotlight for nearly 60 years for casting votes just after midnight in the country’s first presidential primary and in November general elections after latex balloon inventor Neil Tillotson bought the Balsams resort and arranged for the early voting at the hotel. The resort closed in 2011, but voting continued in a ski lodge or at a former culinary school nearby.

“This is the first time I’ve ever picked up a Democrat ballot,” said Tillotson’s son Neil, who is the town moderator. ”I looked through the field of Democrat candidates and looked for someone that I could connect with on policies and could get things done. I believe Mike Bloomberg can win the presidency in November and get things done in a way I feel good about.”

For years, Dixville Notch attracted many political candidates and a lot of media. It is believed to have reached its peak voting population in 1988. In the general election that year, 34 residents voted for Republican George H.W. Bush, and three voted for Democrat Michael Dukakis.

This time around, only US Sen. Michael Bennet, of Colorado, visited Dixville Notch prior to the vote.

The lack of attention by 2020 candidates underscores the precarious situation the community is in. Last year, the attorney general’s office said Dixville Notch needed another official in order to hold a primary election after a person who previously held that role moved away.

That left Dixville Notch with just four total residents. If the community couldn’t find a fifth person in time to fill a selectman vacancy, it would have needed to contact the secretary of state’s office for assistance in joining nearby municipalities in order to vote , according to the attorney general’s office.

Last month, resident No. 5 became Les Otten, a developer who is working to expand and reopen the Balsams.

“At the moment, the importance of the tradition of voting in Dixville seemed as though it was something that needed to be paid attention to,” he said last month. “It was something that was crying out for somebody to step forward and say, ‘I’ll be the fifth guy.’”

Hart’s Location, a small town in the White Mountains, started the early voting tradition in 1948 to accommodate railroad workers who had to be at work before normal voting hours. Hart’s Location suspended the midnight voting in 1964 and brought it back in 1996.

Millsfield, which is 12 miles (20 kilometers) south of Dixville Notch, had midnight voting as far back as 1952, but stopped after a while. It revived the tradition in 2016.