The Spanish capital is trying to get back on its feet after a 50-year record snowfall that paralyzed large parts of central Spain over the weekend. It has now led to icy weather that is hampering the rollout of the much-needed vaccination against the coronavirus. 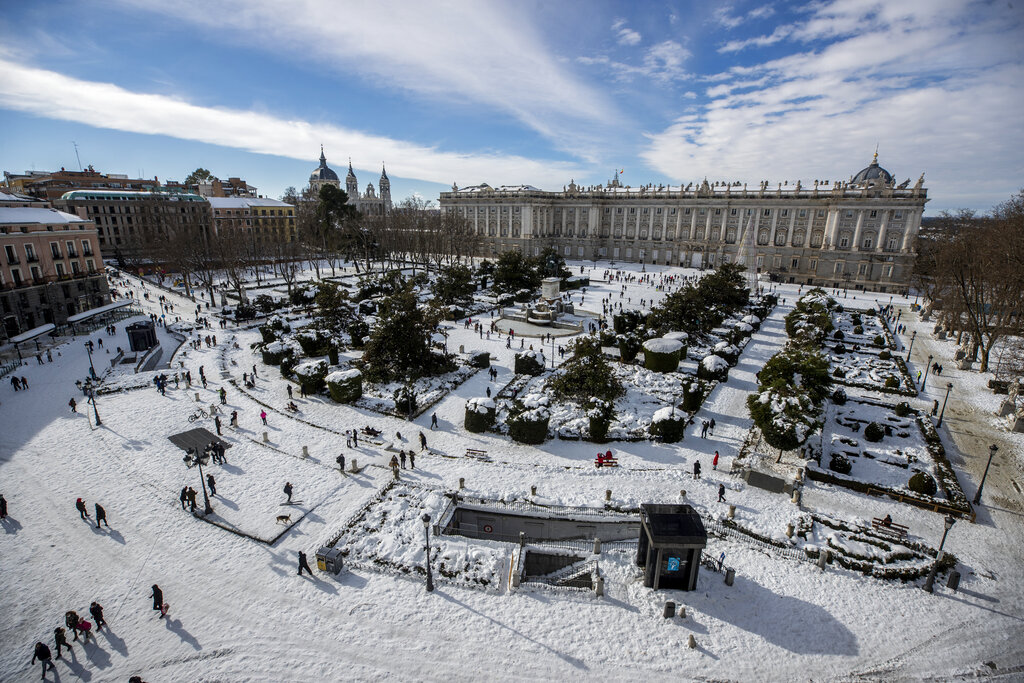 A view of Oriente square covered with snow with the Royal Palace in front in downtown Madrid, Spain, Sunday, Jan. 10, 2021. (Photo: AP)

With a sharp drop in temperatures on Monday and frost freezing much of the snow, which reached more than 50 centimeters (20 inches) in some urban areas, authorities are calling on people to avoid all but essential trips out of their homes.

Nearly 700 roads remain affected throughout Spain, with winter tires or chains needed on roughly half of them, transit authority DGT said.

In Madrid, authorities are calling on citizens to avoid using the few lanes that civil protection and military battalions, aided by snowplows and bulldozers, have managed to clear for ambulances and emergency vehicles.

Much of the city's main services remained closed on Monday, including the main wholesale market, although some supermarkets and newsstands opened for the first time in three days.

Residents, some with crampons and hiking sticks, could be seen warily trying to make their way on snow hardened into ice before disappearing into subway stations.

The underground train system has become the only viable way to commute to work. Commuter trains in Madrid and the high-speed railway between Barcelona and Madrid would resume later on Monday, the national railway company Renfe said.

The airport, which had been closed since Friday evening, saw a dozen flights take off or land on Monday and was expecting to resume full operations “throughout Monday,” Transport Minister José Luis Ábalos said in an interview with Spain’s TVE. But a new batch of 350,000 doses of the Pfizer-BioNTech vaccine that Spain was expecting to receive on Monday at the Madrid airport had to be diverted to the northern city of Vitoria, where a difficult effort to distribute it throughout the rest of the country by land was underway.

Schools were closed on Monday in the regions of Castilla La Mancha, Madrid, and many other areas of Spain.

At least four people have died as a result of flash floods or low temperatures brought by Storm Filomena. The blizzard also trapped over 1,500 people in their vehicles, some of them for up to 24 hours.