A day after snowstorms caused chaos across much of Spain, forecasters warned there was more to come on Saturday as five regions were put under red alert. 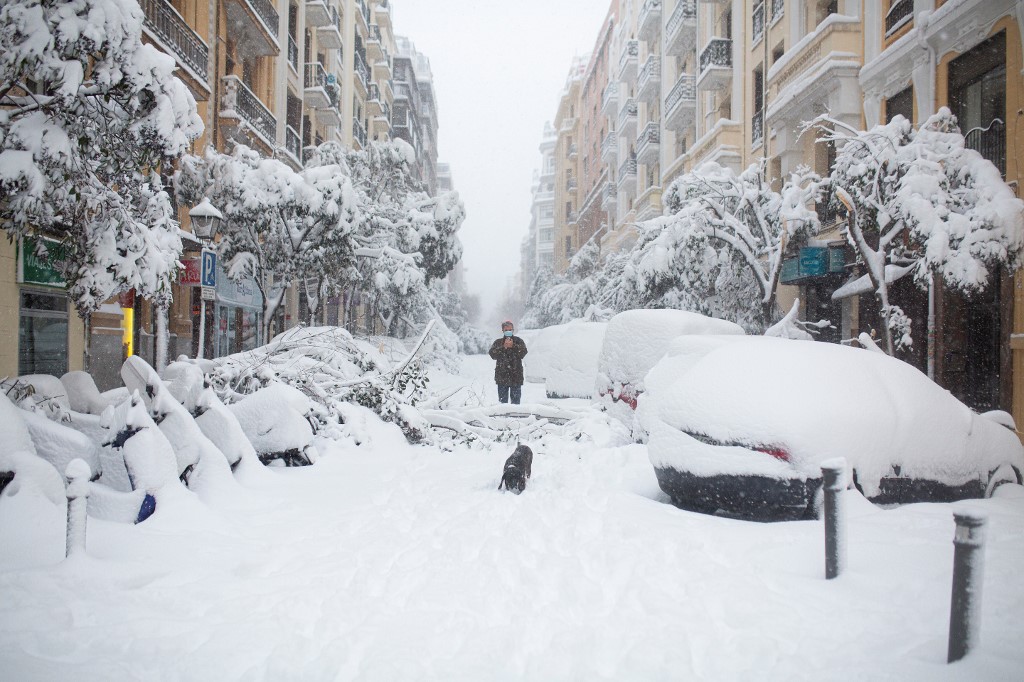 A man takes pictures while walking his dog amid a heavy snowfall in Madrid on January 9, 2021. (Photo: AFP)

Storm Filomena blocked roads, particularly in the centre of the country, with the capital Madrid seeing its heaviest snowfalls since 1971.

Madrid's Barajas airport was shut down late Friday and hundreds of motorists were left stranded.

The AEMET weather agency described the situation as "exceptional and most likely historic".

Another 20 centimetres (nearly eight inches) was forecast to fall Saturday in Madrid and central Spain's lower plains, with up to 50 centimetres at higher altitudes.

"It's been a complicated day but tomorrow is going to be even more difficult," the mayor of Madrid, Jose Luis Martinez-Almeida, tweeted in a video just before midnight on Friday.

In an update Saturday, he described the situation as "extremely serious" and advised people not to leave home.

The authorities suspended bus services and rubbish collections in the city after a night in which the snow continued to fall steadily.

Spanish Prime Minister Pedro Sanchez also tweeted to call on people to stay indoors and follow the instructions of the emergency services.

Madrid's emergencies agency said it had worked all night to help trapped motorists, freeing a thousand vehicles. They asked others still stuck to be patient.

The snowfall disrupted traffic on nearly 400 roads, said transport officials and the Renfe rail network said high-speed trains between Madrid and Valencia had been cancelled.

The snow converted Madrid's famous Puerta del Sol into a winter sports venue, as skiers -- and even a man on a sled drawn by five dogs -- took to the normally busy thoroughfare.

Apart from Madrid, the regions of Aragon, Valencia, Castilla La Mancha and Catalonia were the worst-hit by the snowstorms.

The historic city of Toledo asked the army for help clearing the streets, as did Albacete in the southeast, public television reported.

Before the snowfall began Thursday morning, temperatures had already plummeted to an unofficial record low of -34.1 degrees Celsius (-29.38 Fahrenheit) at a ski station in the central Pyrenees on Wednesday.

Filomena has also brought intense rain and high winds to the Canary Islands as well as Spain's southern coast.