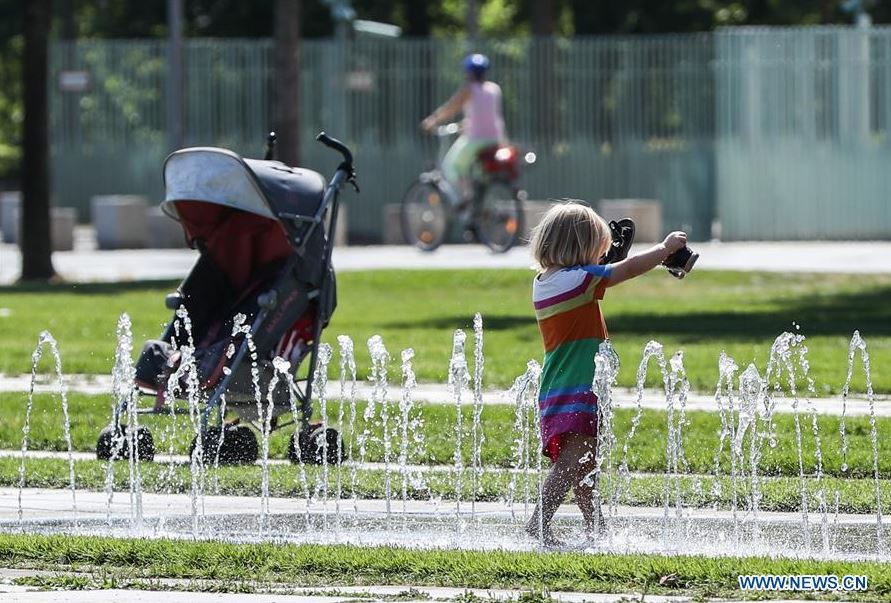 A child plays by a fountain in Berlin, capital of Germany, on Aug. 3, 2018. As Europe's scorching heat wave continues to spread across the continent, forecasters are now saying the all-time temperature record in Europe could be broken in the coming days. (Photo: Xinhua)

BRUSSELS, Aug. 3 (Xinhua) -- As Europe's scorching heat wave continues to spread across the continent, forecasters are now saying the all-time temperature record in Europe could be broken in the coming days.

The temperature in Spain and Portugal, in particular, are expected to rise dramatically over the weekend.

Europe's weather warning group, Meteoalarm, has already issued red warnings - categorized as very dangerous and posing a risk to life - for much of southern Portugal and for the Badajoz province in Spain.

Although holidaymakers might normally expect heat in the mid-30 degrees Celsius in these countries, there is the potential for extreme temperatures - edging towards 50 degrees Celsius.

The current European record is 48 degrees Celsius set in Athens in July 1977.

Spain's national weather service has put a warning in place until at least Sunday.

This particular heatwave is due to "a plume of very dry, hot air from Africa", according to Met Office forecaster Sophie Yeomans, with much of Europe being hotter than usual for the time of year.

According to Met Office data, the record for Spain was 47.3 degree Celsius, recorded on July 13, 2017 in Montoro, east of Cordoba, and for Portugal 47.4 degrees Celsius on Aug. 1, 2003 in Amareleja, in the south-central Beja district.

In other parts of Europe, Sweden's highest peak, a glacier on the Kebnekaise mountain, is melting at a rate of several centimeters a day.

Scientists monitoring the decline say the glacier will lose its title of the highest point to the mountain's northern tip.

Wildfires have also raged in some parts of Europe, the most devastating occurring across Greece killing more than 90 people, and Sweden has battled dozens of fires as far north as the Arctic Circle.

One of the principal problems lies in the fact that few countries are sufficiently well-equipped to cope with the insufferable heat, although some abrupt measures have been taken by individual countries, including in Finland where supermarkets are allowing customers to sleep in its air-conditioned aisles.