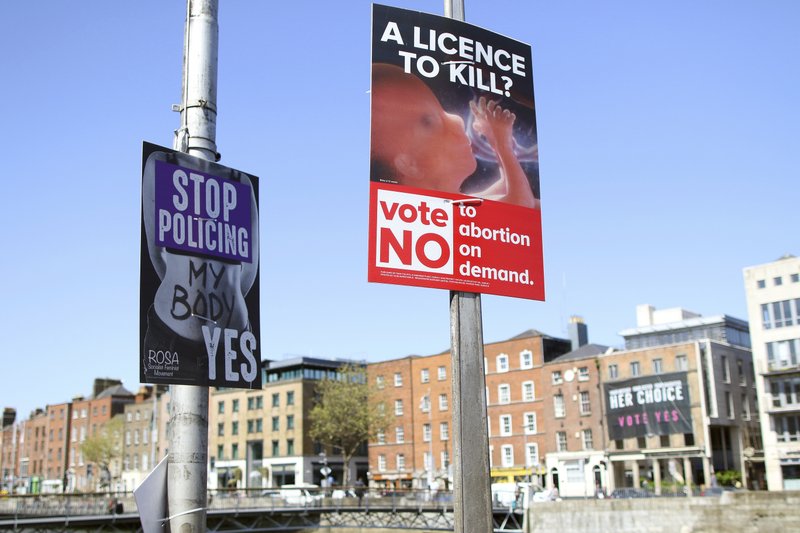 In homes and pubs, on leaflets and lampposts, debate is raging in Ireland over whether to lift the country’s decades-old ban on abortion. Pro-repeal banners declare: “Her choice: vote yes.” Anti-abortion placards warn against a “license to kill.”

Online, the argument is just as charged — and more shadowy, as unregulated ads of uncertain origin battle to sway voters before Friday’s referendum, which could give Irish women the right to end their pregnancies for the first time.The emotive campaign took a twist this month when Facebook and Google moved to restrict or remove ads relating to the abortion vote. It is the latest response to global concern about social media’s role in influencing political campaigns, from the US presidential race to Brexit.

“We shouldn’t be naive in thinking Ireland would be immune from all these worldwide trends,” said lawmaker James Lawless, technology spokesman for the opposition Fianna Fail party.

“Because of the complete lack of any regulation on social media campaigning in Ireland, somebody at the moment can throw any amount of money, from anywhere in the world, with any message — and there’s nothing anybody can do about it.”

The role of online ads in elections is under scrutiny following revelations that Russian groups bought ads on platforms such as Google and Facebook to try to influence the 2016 US presidential race. Many of the ads were designed to sow confusion, anger and discord among Americans through messages on hot-button topics.

Few subjects are more emotive than abortion, especially in largely Roman Catholic Ireland. Despite the country’s growing diversity and liberalism — voters legalized gay marriage in a 2015 referendum — the vote is expected to be close. The campaign is being watched, and sometimes influenced, by anti-abortion groups in the US and elsewhere.

Voters are being asked whether they want to keep or repeal the eighth amendment to Ireland’s constitution, added in 1983, which commits authorities to defend equally the right to life of a mother and an unborn child. Abortion is legal only in rare cases when the woman’s life is in danger, and several thousand Irish women travel each year to terminate pregnancies in neighboring Britain.

Prime Minister Leo Varadkar’s center-right government backs lifting the ban and allowing abortion on request up to 12 weeks of pregnancy.

Ireland is no stranger to referendums — this is its fifth in five years — and the country’s electoral laws regulate traditional forms of campaigning. Radio and television ads are banned completely, and foreign political donations are outlawed. But the 20-year-old electoral rules don’t cover social-media advertising, and there is no limit on campaign spending.

“It’s a complete Wild, Wild West,” said Craig Dwyer of the Transparent Referendum Initiative, a volunteer group set up to collect information on the ads being used to target Irish Facebook users. “When we started collecting this information there was absolutely zero regulation.”

The group has compiled and analyzed almost 900 Facebook ads connected to the referendum. Many were placed by registered lobby groups, and most came from inside Ireland. But several dozen were either untraceable or from overseas, including some that have been linked to US-based anti-abortion organizations.

Several pages, with names like “Just the Facts About the 8th Amendment” and “Undecided on the 8th,” claimed to give neutral information but had a clear anti-abortion agenda.

Such pages can be used to identify undecided voters, who can then be targeted with tailored ads — a practice that has been under scrutiny since revelations that political consultancy Cambridge Analytica harvested Facebook users’ data to micro-target select groups during the US presidential race.

Concern about the impact of online ads led Facebook to announce May 8 that it would no longer accept referendum-relayed advertisements from outside Ireland in order to “ensure a free, fair and transparent vote.”

A day later, Google went even further, halting all referendum advertising as part of efforts to protect “election integrity.” The company said it was aware of “concerns” around the issue but declined to say what prompted the decision.

Research by the Transparent Referendum Initiative and University College Dublin found “some indications of large-scale spending on unregulated Google and YouTube ads” before Google’s ban.

Google’s decision infuriated anti-abortion campaign Save the Eighth, which was about to launch a series of YouTube ads when Google, which owns the video-sharing site, pulled the plug.

“You have a multinational corporation essentially saying that this country’s democracy is compromised, and they have provided no evidence for that whatsoever,” he said.

McGuirk dismisses the role of overseas ads in the referendum, saying most were “small, amateurish ads basically made by John and Mary in New Jersey telling Irish people to pray the rosary for a ‘no’ vote. They weren’t helping us in the first place.”

McGuirk sees allegations of shady social-media advertising as an attempt to undermine the “no” campaign because it was winning the online war. As with the Trump and pro-Brexit campaigns, Save the Eighth paints itself as an underdog, battling what it sees as pro-repeal bias among mainstream media and politicians.

The pro-repeal campaign insists it was equally disadvantaged by the Google ban.

“We had a Google strategy that was in place, we were spending money,” said Peter Tanham, head of digital for Together For Yes. “We had to spend a day readjusting our plans.”

Both sides agree that tech firms should not be the ones making important decisions about Ireland’s democracy. Lawless has introduced a bill to parliament that would require all online advertisers to disclose the publishers and sponsors behind ads.

“We should not be looking to boardrooms in Silicon Valley to see how our elections should be governed,” he said.

The lawmaker’s bill may become law later this year, too late to influence Friday’s vote. Polls suggest the “yes” side has a lead, but it may be narrowing — and almost one in five voters say they are undecided.

While both sides say online ads are an important part of their strategy, many feel the argument will be won the old-fashioned way: through personal contact, one voter at a time.

“It was a blow when Google said they weren’t going to play more ads,” said Siobhan McAteer, a 25-year-old “no” campaigner distributing leaflets on a Dublin street. “It was a bit upsetting, but the momentum is in the streets. It’s our campaigners talking to people on the streets.”