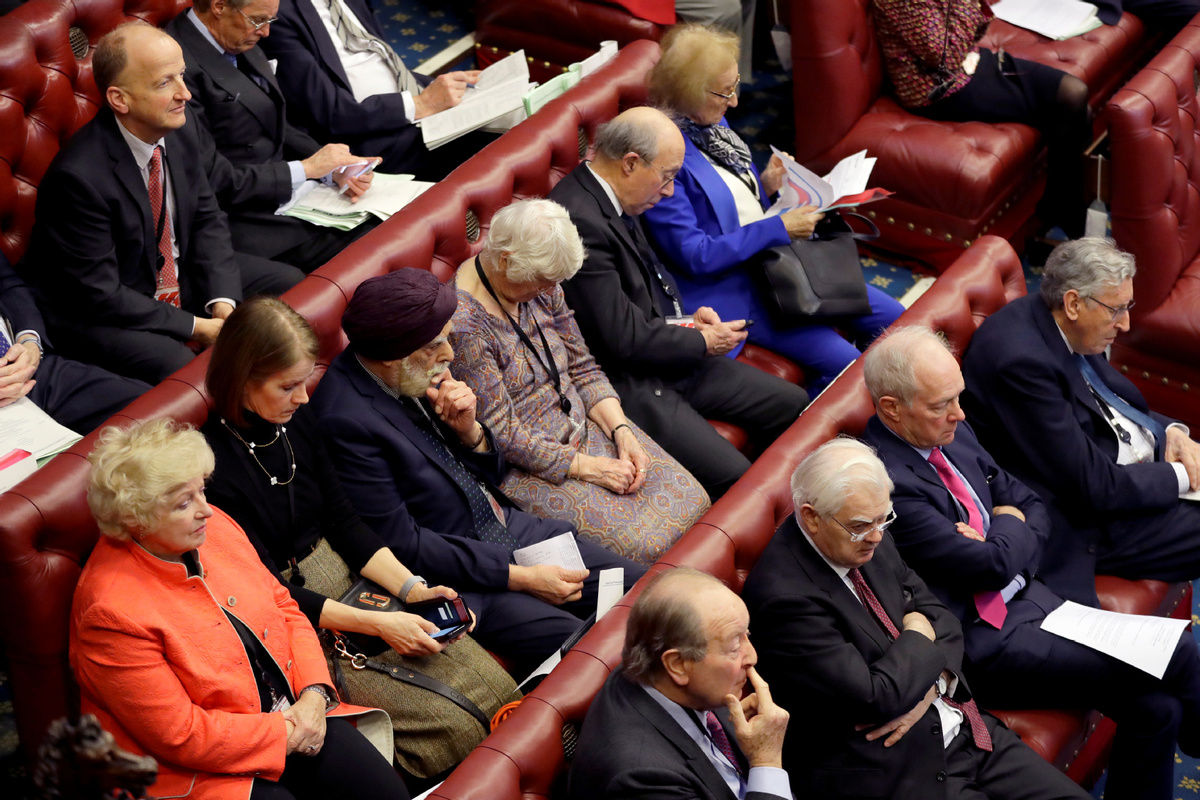 Members listen inside the House of Lords as the European Withdrawal Agreement Bill is debated in London, Britain on Jan 21, 2020. (Photo: Agencies)

Members of the United Kingdom's largely symbolic upper chamber, the House of Lords, will effectively conduct their official business in private in the coming weeks because of the choice of software used to facilitate virtual debates.

Both the House of Lords and the democratically elected, decision-making lower house-the House of Commons-have decided to temporarily conduct debates and votes via video connections, in order to comply with the government's social distancing and lockdown restrictions to restrict the spread of the novel coronavirus.

But while the House of Commons has decided to use software called Zoom, which allows its 650 lawmakers to debate issues from their homes and for parliamentary business to be broadcast live, the House of Lords has decided to use a Microsoft video-conferencing program called Teams that the Guardian newspaper reports does not allow proceedings to be shared with the public.

Thomas Ashton, who is known in the House of Lords as Lord Ashton of Hyde and who is the Conservative Party's chief whip in the upper house, told the paper he would only sanction the use of Zoom if it can be proven to be secure.

And he said people can follow House of Lords business by reading the official written account of what is said, known as Hansard, which is usually available a few hours after each debate.

But the Labour Party's Andrew Adonis, who is known as Baron Adonis of Camden Town in the House of Lords, told the paper the lack of public access to debates conducted by members of the House of Lords was troubling.

"It will not be possible for the public to observe what's going on, which is a breach of all precedent in terms of parliamentary proceedings and is a matter of very great concern," he said. "If we were using Zoom, as the House of Commons is, then it would be possible to broadcast proceedings."

The House of Lords has said it will revisit the issue in two weeks' time in the hope of a solution being found, but Adonis said it seems unlikely progress can be made without members of the House of Lords deciding to use Zoom.

"For anything other than a very short period of time while technical difficulties are sorted out, it is absolutely unacceptable that the proceedings of this house are not broadcast," he said.

Lindsay Hoyle, the speaker in the House of Commons and therefore the person who oversees fair debate there, told the BBC he will be interested to see whether Zoom or Teams works best.

The Independent newspaper said democracy campaigners have criticized the situation.

Darren Hughes, chief executive of the Electoral Reform Society, told The Independent: "Voters across the world expect to see the legislators they are paying: it's a core part of democratic transparency. This seems to be another sign of the Lords failing to meet the democratic standards voters expect."

Hughes said the House of Commons is proving that debates can be shared with the public.

"It's vital for democracy not to simply be done, but be seen to be done," he said. "Unfortunately, any kind of democracy is lacking in Britain's outdated second chamber. The Lords authorities must get to grips with this rapidly."