BUENOS AIRES, Oct. 10 (Xinhua) -- Surmounting a remote mountain peak over 4,000 meters above the sea in northernmost Argentina, the Cauchari photovoltaic park with 1.2 million solar panels is invigorating the country's northern province of Jujuy. 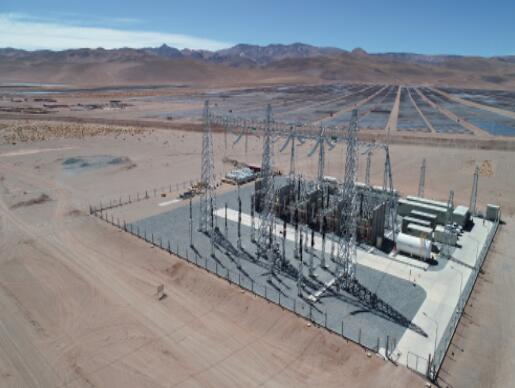 Built with technology supplied by China Power Construction and the Shanghai Electric Power Construction Company, the solar panels neatly tuned toward the sun on the 600 hectares of barren, rocky land surface composed the largest photovoltaic park in Latin America.

Starting operation from the end of September, it will add around 50 million U.S. dollars annually to the income of the province of Jujuy, helping to alleviate poverty in the region.

In a recent interview with Xinhua, Antonio Garruzzo, client manager of Talesun Energy Argentina who participated in the project, said the plant will create jobs for Jujuy as well as increase its resources available.

"The ultimate goal is for the province to be able to raise funds to pay its (external) debt and continue to generate investments. Jujuy is a province that requires investments in many areas and among these are other renewable energy projects, in addition to Cauchari," Garruzzo explained.

"It is not a secret that the province is readjusting its energy matrix, and the collection of electricity from solar panels is one of the pillars of restructuring towards clean energy sources," he added.

The solar park is located on the Puna plateau in Jujuy province, which shares a border with Bolivia. With an altitude of 4,200 meters, the region is among the places with the highest level of solar radiation in the world.

The park, consisting of three areas -- Cauchari I, II and III, each generating 100 megawatts of power -- will benefit around 160,000 families in Argentina.

"The energy produced by this park is intended for the Argentine (electrical) system. The towns around Cauchari, in order to access this energy, would have to have a direct connection, but with this level of generation, Jujuy can raise funds to work on the micro-distribution of electricity in surrounding towns through the creation of infrastructure," Garruzzo said.

He added that 60 percent of the jobs directly and indirectly generated by the project went to inhabitants of the province.

"During the entire project, about 1,500 (jobs) were generated, and cooperatives were also created in the towns that offered services to the park," he said.

"We believe that this is a dynamic that will continue because the plant will require work in relation to the maintenance of the panels and medium- and low-voltage equipment, cleaning, road maintenance, warehouse management, kitchen management, transportation, among others," he said.

Construction of the plant began in April 2018, after China and Argentina signed a cooperation agreement within the framework of the Belt and Road Initiative.

"It is very important what China and Argentina are achieving. It is win-win cooperation because Argentina provides natural and human resources and China provides financing and technology," Garruzzo said.

For Garruzzo, the photovoltaic park is an example of binational cooperation that "will go very far," and that is already helping Argentina transform its energy matrix.