HONIARA, Solomon Islands, Oct. 11 (Xinhua) -- The Solomon Islands will benefit from newly established diplomatic ties with the People's Republic of China, said Bradley Tovosia, the Solomon minister of mines, energy and rural electrification, in an interview with Xinhua here. 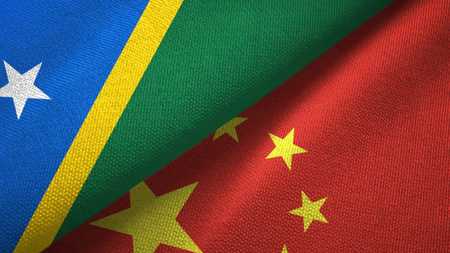 Tovosia, who joined the parliament in 2010 and is currently in his third term, said that an official relationship with China offers the Solomon Islands a big opportunity to develop, and the country will benefit from comprehensive cooperation with the rising economic giant in all areas.

"As a minister in this country, I have an inner conviction that Solomon (Islands) can only move forward if we have a bilateral diplomatic relationship with China and that is what we did," Tovosia told Xinhua in his office Thursday.

"Solomon Islands is situated central to a lot of other countries in the region but our economy is really not growing... so having bilateral relations with China, it will really boost the economy," he stressed.

Tovosia said that the Solomon government will support foreign companies conducting business in the country and meanwhile try to ensure the country's resources are used for the benefits of its people.

The Solomon Islands is abundant in natural resources, with fishery, forestry and mining as its pillar industries, which Tovosia believes present ample opportunities for those willing to invest in the country.

By attracting big businesses to the country, Tovosia hopes to improve the lives of roughly 85 percent of the population who live in rural areas, where most of people have no access to adequate electricity, water, sanitation and healthcare.

"So we are sort of in a way that we need someone that can come and help us in a true way that will really help the Solomons to grow."

The Solomon Islands is encouraged to see the great improvements in economic development and people's livelihood that neighboring countries including Fiji, Vanuatu and Papua New Guinea have achieved through cooperation with China, especially through common projects under the Belt and Road Initiative, Tovosia said.

The country is looking forward to carrying out reciprocal cooperation with China in all fields so as to move forward together, he stressed, adding priority cooperation areas include infrastructure, mining, fishery, forestry, education and tourism.

Tovosia urged the people of the Solomon Islands to give the new bilateral ties with China a chance to grow, and to see the available benefits, particularly in terms of economy and infrastructure.

China is deepening its reform and opening up policy so as to maintain a stable and rapid development, which will continue to benefit the world, he said.

"China is growing fast and that is proved all around the world. They are growing in terms of their economy, in how they do things and that is something we value."

"I wish China and the Solomon Islands will have this bilateral friendship for a long time..." he concluded.