Some polls show US parents' growing fears of dangers at school 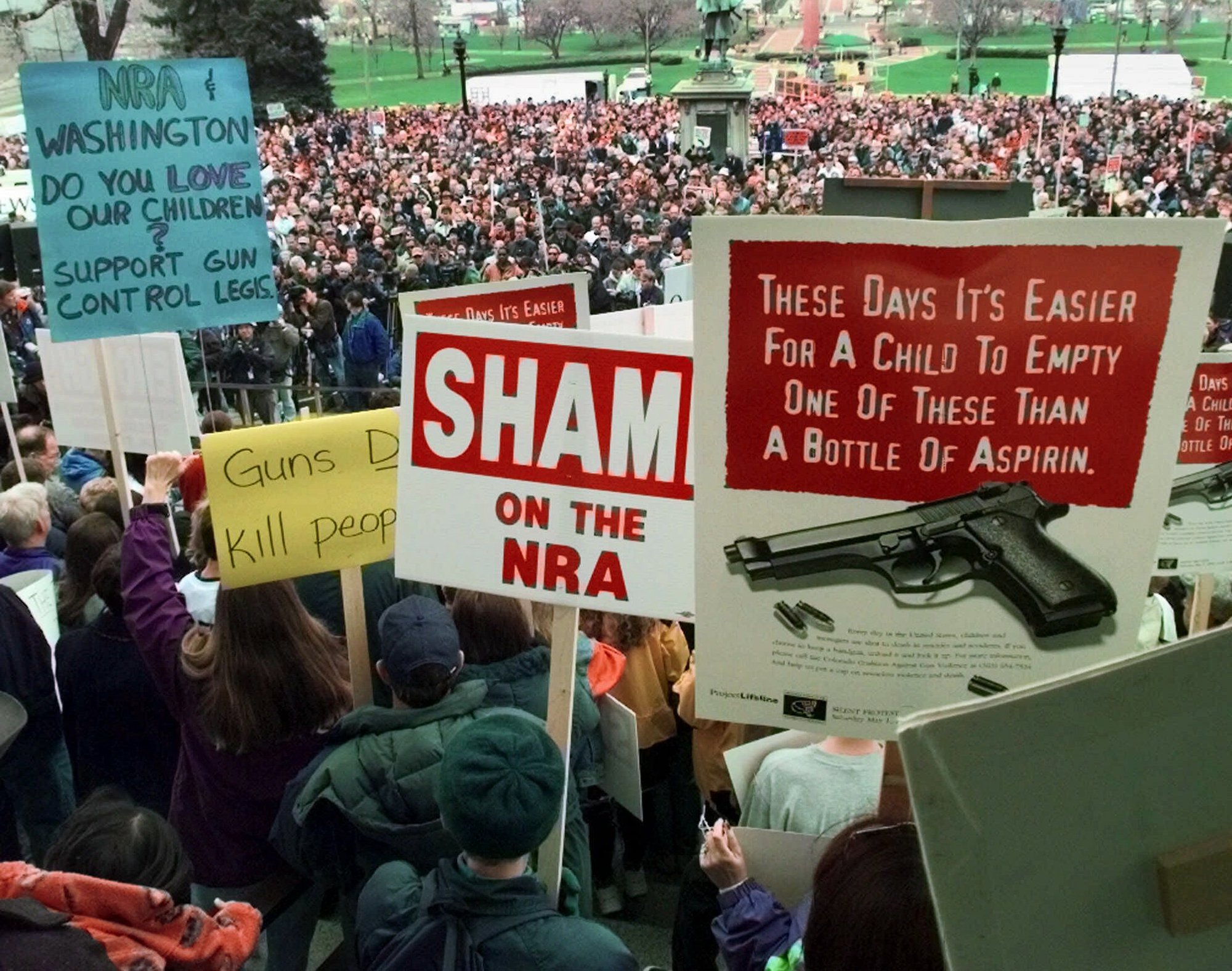 In this May 1, 1999, file photo, demonstrators gather on the Colorado State Capitol grounds in Denver, Colo., to protest against the National Rifle Association's annual meeting, which is being held in the city. (Photo: AP)

The deadly attack at US Columbine High School in 1999 seemed to usher in a new era of school shootings.

Two decades later, polls consistently capture growing fears among American parents that their children face imminent danger whenever they go to school. Those fears have only intensified since attacks at an elementary school in 2012 in Newtown, Connecticut, and last year at a high school in Parkland, Florida.

In the aftermath of the Parkland shooting, some research suggests that gun violence is a near-daily experience at schools. Other studies indicate that deaths from school violence have actually declined since 1991. Answers to some key questions about school attacks over the last several decades:

WHAT ARE AMERICANS’ PERCEPTIONS OF SCHOOL SHOOTINGS?

A March survey by The Associated Press-NORC Center for Public Affairs Research found that a majority of Americans believe schools and colleges, along with places of worship, have become less safe compared with 20 years ago.

Wide shares of Americans also believe parents, the internet and news coverage of similar attacks are at least partly to blame for school shootings.

WHAT DO THE DATA SHOW?

According to data compiled by Northeastern University criminologist James Alan Fox, who has been researching gun violence for decades, school shootings were more frequent in the 1990s than today. From 1991 until the Columbine shooting, an average of 19 fatal school shootings happened each year, with about 22 people killed.

In contrast, over the past eight years, an average of about six fatal school shootings happened each year, with about 14 killed.

“First of all, schools are safe, and if you consider the over 50 million schoolchildren and the over 100,000 schools that we have, the risk of a student or a faculty member being killed by gunfire, it’s extremely low,” Fox told AP. “The one-homicide-is-too-many mantra is quite true. Yet when you do the calculations, the probability is very small.”

Other data, such as that compiled by Everytown for Gun Safety, captures a broader spectrum of gun-related violence, including non-fatal shootings and drive-by shootings in which the perpetrators do not have a direct connection to the school. That research paints a different picture that suggests gun violence — from random gunfire to suicides — is a frequent occurrence.

Everytown, which began tracking school shootings after Newtown, notes that attacks such as those at Sandy Hook Elementary School and Marjorie Stoneman Douglas High School are not commonplace and represent less than 1 percent of the school gun-violence incidents.

WHAT DRIVES THE PERCEPTION THAT SCHOOL SHOOTINGS ARE ON THE RISE?

Fox chalks much of it up to the attention such crimes receive in the news. A generation ago, there were many fewer cable TV news channels and websites covering the events 24 hours a day.

One school shooting he cites happened in 1989, when a gunman killed five elementary school students and wounded 32. The shooting in Stockton, California, is barely remembered.

Columbine was among the mass shootings in recent decades that sparked the “No Notoriety” movement, an appeal by both gun-control and gun-rights activists to avoid repeated reporting of the names and biographic details of gunmen. They hope denying attention to the attackers prevents inspiring a new crop of future shooters.

HOW HAVE SHOOTINGS EVOLVED?

The early 1990s were plagued by a high homicide rate overall around the country, and that’s reflected in school shootings. Many of the attacks in that decade were gang-related. Gang warfare spilled out from the streets into the halls of the schools, but those shootings “were not the type of events that got a lot of attention, except for locally,” Fox said.

In more recent years, most school shootings are either related to perceived bullying or to reasons that cannot be definitively explained.

The Columbine shooters still retain influence. Peter Langman, an expert on the psychology of school shooters, has found more than 30 other rampage attacks, from California to Germany, have been inspired in some manner by Columbine.