As a new school year approaches, COVID-19 infections are again on the rise, fueled by highly transmissible variants, filling families with dread. They fear the return of a pandemic scourge: outbreaks that sideline large numbers of teachers, close school buildings and force students back into remote learning. 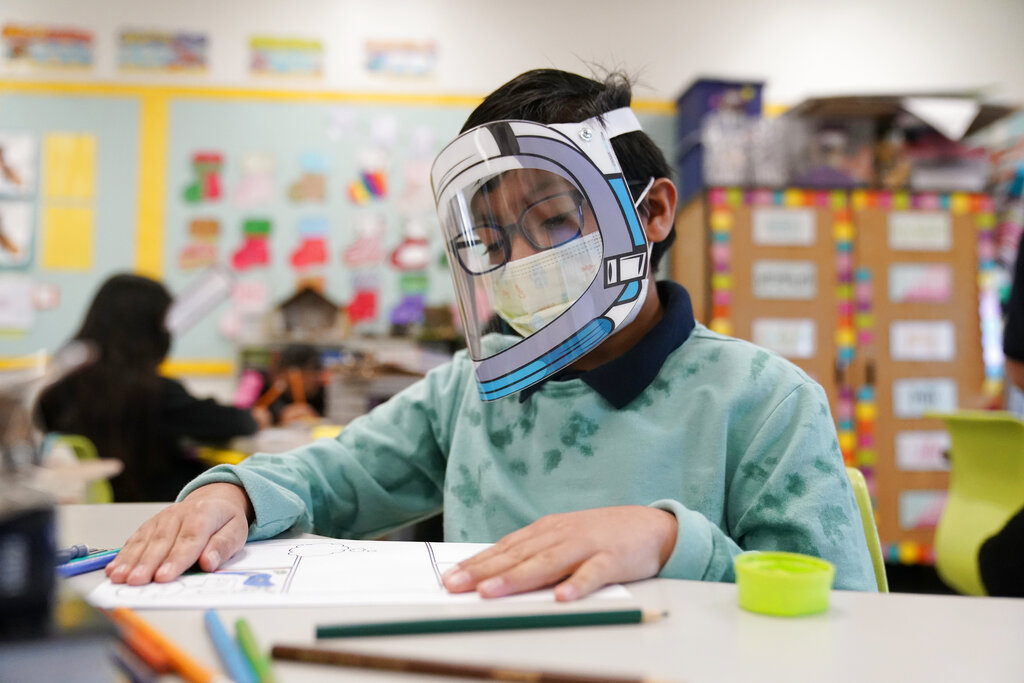 A student wears a mask and face shield in a 4th grade class amid the COVID-19 pandemic at Washington Elementary School on Jan. 12, 2022, in Lynwood, Calif. (Photo: AP)

Some school systems around the country have moved to bolster staffing to minimize disruptions, but many are hoping for the best without doing much else differently compared with last year.

Even some of the districts that had the most disruptions to in-person schooling amid the spread of the highly contagious omicron variant point to few specific changes in their prevention efforts.

Among them is Baltimore County schools, where the number of days that individual schools in the district couldn't offer in-person learning added together totaled 159 in January, according to data from the private research firm Burbio, which tracks over 5,000 school districts nationwide. District officials said they did not see a need to change protocols.

"We don't anticipate significant changes to our plan; we don't anticipate significant disruptions," said Charles Herndon, a Baltimore County Public Schools spokesperson. "What we're expecting to see is waves of COVID in 2022 and 2023, and I'm sure there are going to be times when more folks are going to be absent and there will be times when everything is OK."

Still, the district is prepared to move classes online if necessary.

"We certainly hope we don't have to go to that extreme, but it is an option should we need to consider it," he said.

Teacher shortages remain a major concern, even bigger than COVID-19 itself, said Dan Domenech, executive director of AASA, an association of school superintendents.

"That is the greater concern – that they will have the necessary staff to man all the classrooms, to man all the programs – which will only be made worse if there is an outbreak of COVID," he said.

Philadelphia's schools illustrate how disruptive surges can be. Beginning in January the virus caused 114 city schools to go remote for an average of around eight days each — a total of 920 cumulative days of remote learning, more than any other district in Burbio's data for January through June.

The district has switched to a new staffing agency and aims to fill 90% of substitute requests this year, said Orbanek. They also now have over 100 supplemental teachers, substitutes who show up at the same school every day in case of last-minute absences.

One parent, James Fogarty, saw his elementary school age children go back to online learning several times last year in Pittsburgh, a district that saw 46 disruptions in the second half of last year. He hopes the district and communities can identify problems earlier and work on better solutions, like identifying backup options for families.

"How do we build systems that are flexible to meet the shocks when they happen other than just like saying to families, 'Good luck, you're on your own and I hope you don't get fired because you have to miss your shift job,'" said Fogarty, the executive director of A+ Schools in Pittsburgh, an organization that promotes equity in schools. "That's not a satisfying answer for me."

Schools cannot afford more disruptions that distract them from the critical work of helping kids catch up, said Thomas Kane, an education policy researcher at Harvard. Students at lower-income schools that were doing remote learning for more than half a year lost the equivalent of 22 weeks of learning, he said, while higher-income schools lost 13 weeks.

"We've experienced a historic widening in achievement gaps between Blacks and whites, between Latinx students and whites, between high- and low-poverty schools," he said. "If we don't get active in trying to close those gaps, they're going to become permanent and there will be huge consequences for kids."

Schools are hopeful disruptions will be less likely as many districts have invested in better ventilation and vaccines are available to children as young as six months old. Besides ramping up hiring of substitutes, some of the districts that were hit hardest last year have been making small changes to their protocols.

At Baltimore City schools, which is separate from the county school system, officials say expanded access to rapid tests will help schools stay open if a new variant surges in the fall. The school previously relied on slower PCR tests, and when omicron cases spiked in January, the district's testing regimen couldn't keep up. The switch to a faster test helped the district avoid any schoolwide closures for the rest of the spring.

"We firmly believe that with the protocols we have in place that we're going to be able to keep in-person learning going as the virus ebbs and flows and as new variants come — pending an unforeseen variant that really changes the game," said Cleo Hirsch, director of the district's COVID-19 response.

The school district in Montgomery County, Maryland, had 338 cumulative days of disrupted learning in January, the second-highest of all the districts in Burbio's data. District spokesperson Christopher Cram said that was in part because of a policy that triggered hybrid or virtual learning automatically if the COVID case rate in a school rose to 5%. It is working on an updated safety plan for the new school year, he said.

In Columbus, Ohio, where the school system saw 106 disruptions due to staff absences at the start of 2022, the district did not point to any planned changes to its policies to prepare for potential surges in the new year. "As we look toward opening schools in August, the District will continue to follow its current mitigation protocols to help keep staff, students, and families safe," spokesperson Jacqueline Bryant said.

Lolita Augenstein, president of the Council of PTAs in Columbus, said she's optimistic that this year will be better. The district has focused on hiring teachers and substitutes, she said, and educators are better trained to teach online if needed.

"We may not have figured it all out, and there are new variants and there are new concerns that have popped up," said Augenstein, whose daughter graduated from a district high school last school year. "But kids are resilient. ... The families are trained in going back and forth between remote and the building."