Schools partially reopened in England on Monday and the most vulnerable were allowed to venture outdoors, despite warnings that the world's second worst-hit country was moving too quickly out of its coronavirus lockdown. 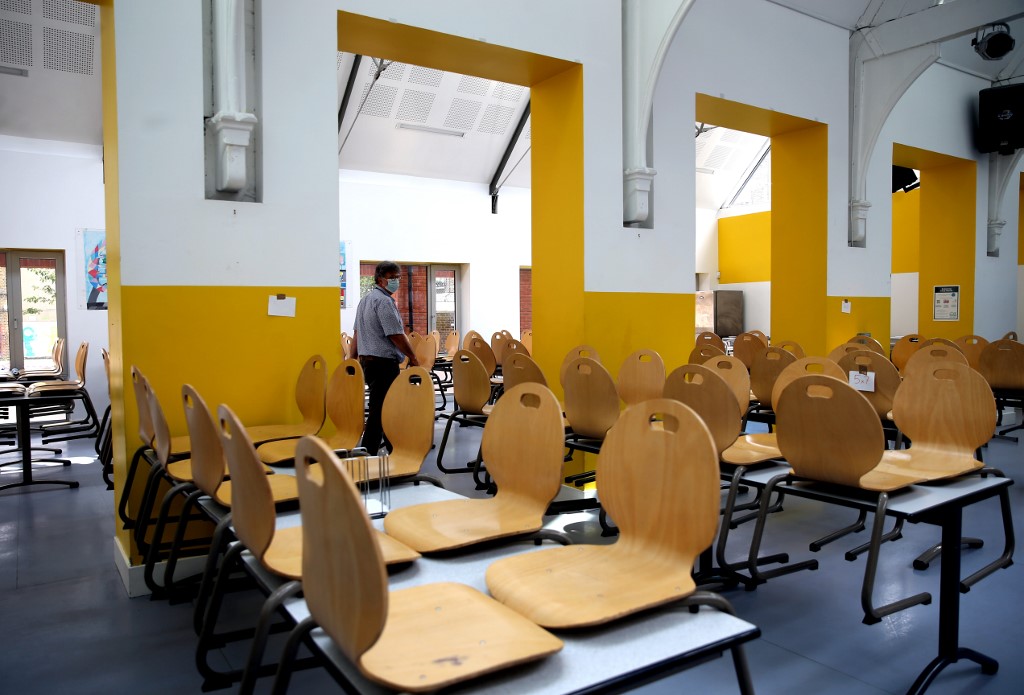 Head teacher Denis Bittmann walks past an empty canteen at Collège Français Bilingue de Londres at Kentish Town, north London on May 27, 2020, ahead of the Government's proposed recommencing of education for Reception and Year 1 classes. (Photo: AFP)

A death toll that now officially stands at 38,489 has piled political pressure on Prime Minister Boris Johnson -- still basking in the glory of a thumping December election win when the pandemic reached UK shores.

Johnson spent much of the past week stamping out a scandal sparked by his chief adviser's decision to drive to a picturesque castle with his family while everyone was under orders to limit outdoor exercise to an hour a day.

The furore over Brexit architect Dominic Cummings appears to have abated but concern about Johnson's handling of the crisis remains.

His public support last week suffered the sharpest fall for a Conservative party leader in 10 years before recovering slightly in a poll published Monday.

Johnson has set out a timeline that allows two million younger children to return to school on Monday and older ones on June 15.

But a survey conducted by the National Foundation for Educational Research found that primary school leaders expect about half the families to keep their children home.

The government is also allowing those most at risk of suffering serious consequences from the virus to spend time outdoors for the first time in two months.

"I do not underestimate just how difficult it has been for you," Johnson told the 2.2 million Britons who fall into the extreme risk category.

The UK government has also been encouraged by the positive experience of other European countries that have started to return to something resembling the old way of life.

But critics argue that the so-called R rate of transmission -- estimated nationally at between 0.7 and 0.9 -- was still dangerously close to the 1.0 figure above which the virus's spread grows.

Parks and beaches were filled across England for the second successive weekend in what has been one of the driest springs in over 100 years.

Several members of the government's scientific advisory group have warned that restrictions were being lifted prematurely.

Minister Alok Sharma told the BBC on Monday that the "scientific advice does differ" but the overall view from the official body advising the government was that "we must do this cautiously".

The group has more than 50 members and disagreements are to be expected -- although public criticism of the government's policies from its own advisers is relatively rare.

The scientists are not the only ones to express concern.

London's Metropolitan Police Federation chair Ken Marsh said current rules such as those allowing people to gather in groups of six in England -- but not sit on each other's deckchairs -- were unenforceable.

"I don't think the public are taking much notice of what is laid down in front of them," Marsh told The Daily Telegraph,

"They are doing it how they want to do it."

National Education Union co-leader Mary Bousted said the government has had to revise its school reopening guidance 41 times since mid-May.

There were "things they had forgotten, things they didn't know, and things they got wrong (and that) had to be added in", Bousted told Sky News.

The schools will only start reopening in England because each of Britain's four nations follows its own health guidelines.

Scotland is waiting until August and Northern Ireland is eyeing September, while Wales is still making up its mind.

Communities minister Robert Jenrick argued a return to school was essential because a lack of classes and lunch provision was hitting disadvantaged families especially hard.