WORLD Some US states begin to ease restrictions

Some US states begin to ease restrictions 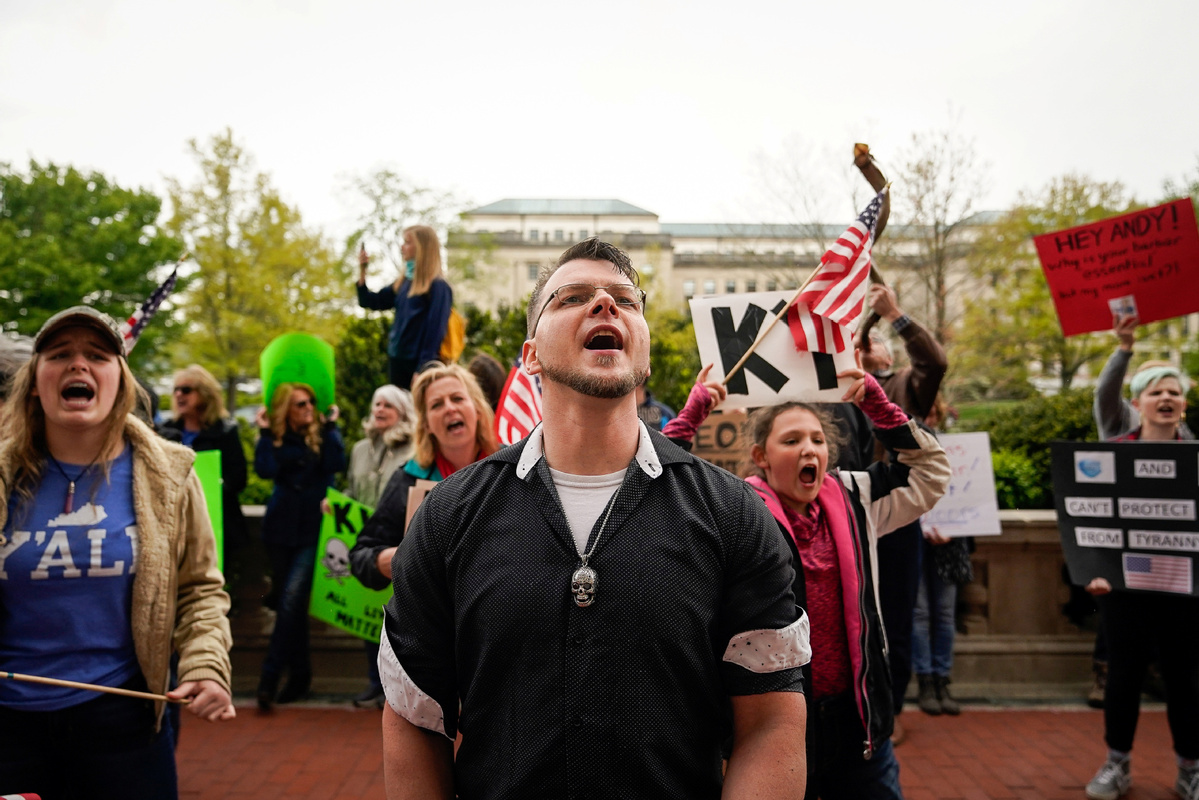 A protestor shouts as hundreds rally outside the Kentucky State Capitol against current social distancing requirements and business closures ordered by Gov. Andy Beshear, amid the outbreak of the coronavirus disease (COVID-19), in Frankfort, Kentucky, US April 15, 2020. Similar demonstrations were held last week in Kentucky, Ohio and North Carolina. (Photo: Agencies)

At Friday's White House news briefing, Trump was asked whether those states should lift their stay-at-home orders. "No, but elements of what they've done are too much. ... It's too tough," he said.

Asked if he is concerned that the protests could spread the virus, Trump said: "These are people expressing their views. They seem to be very responsible people to me. They've been treated a little bit rough."

But Governor Jay Inslee of Washington state said Trump's tweets "encourage illegal and dangerous acts" and said the president was "putting millions of people in danger of contracting COVID-19".

"His unhinged rantings and calls for people to 'liberate' states could also lead to violence. We've seen it before," he said.

As some governors consider easing their restrictions, new estimates by researchers at Harvard University suggest that the US can't safely reopen unless it conducts more than three times the number of coronavirus tests it is currently administering over the next month.

An average of 146,000 people per day have been tested for the coronavirus nationally so far this month, according to the Covid Tracking Project, which on Friday reported 3.6 million total tests across the country.

To reopen the US by mid-May, the number of daily tests performed between now and then should be 500,000 to 700,000, according to Harvard estimates.

On Friday, Trump announced plans to expand nationwide testing, saying that his administration was sending 5.5 million testing swabs to states in the coming weeks. Governors, business executives and lawmakers have all called on the president to expand testing before reopening the country.

"The governors are responsible for testing," said Trump.

A shortage of test kits and technical flaws in the US significantly delayed more widespread testing of the virus, letting it spread undetected for weeks. With more than 695,000 cases, the country has the highest number of confirmed cases in the world.

New York Governor Andrew Cuomo, whose state has been the hardest one hit by the virus, said Saturday more testing is necessary.

"The trick with testing is not that we don't know how to do it ... it's bringing this up to scale," Cuomo said.

Cuomo noted that test kits purchased from different companies required different equipment, including chemical reagents. He said that labs in the state told him it was difficult to obtain the chemicals needed for the reagents, as they are produced in China. 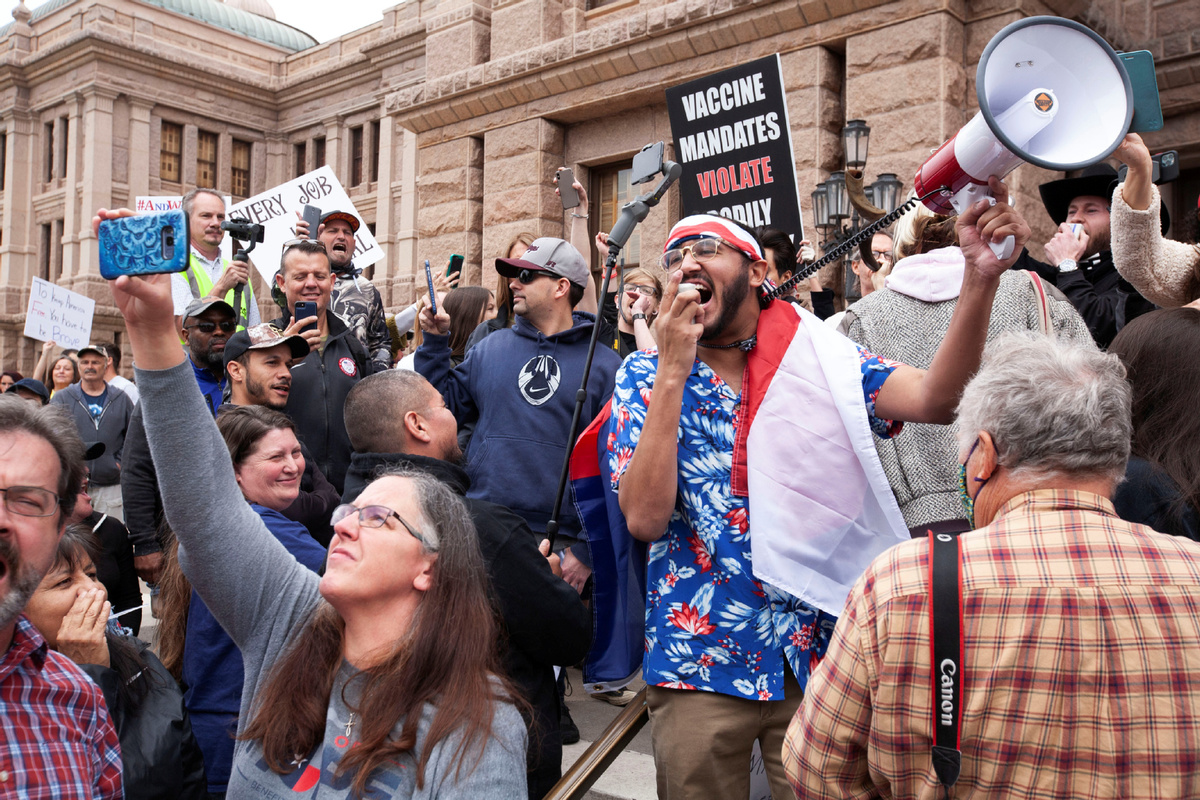 People demonstrate in Austin, Texas, on Saturday against the extended stay-at-home order aimed at slowing the spread of COVID-19. (Photo: Agencies)

With more than 97 percent of the population under stay-at-home mandates, some states in the United States have started to ease restrictions as protesters in other states took to the streets demanding restrictions be lifted or relaxed.

President Donald Trump on Saturday said Texas, Vermont, Montana, Ohio, North Dakota and Idaho are taking steps toward a "safe, gradual and phased opening".He said some protesters are responding to governors who "have gotten carried away" with restrictive measures, particularly criticizing Michigan and Virginia.

In Texas, Governor Greg Abbott, a Republican, said he was starting a "phased-in" approach to reopen the state economy, including lifting some restrictions in the coming days on non-virus medical procedures, shopping and state parks.

On Friday, beaches and parks in Jacksonville, Florida, were reopened after Governor Ron DeSantis gave his approval.

More than 25,000 people in Florida have been infected with COVID-19, and schools, business and public events are all closed or canceled to try to slow its spread.

On Saturday, protesters rallied in Austin, Texas. It was organized by InfoWars, a controversial website that has promoted conspiracy theories. "Fire Fauci," the crowd chanted, referring to Anthony Fauci, the Trump administration's top infectious disease expert who has been a strong advocate of social distancing efforts.

At a rally in Annapolis, Maryland, on Saturday, "Reopen Maryland", the group behind the protest, called on participants to follow all laws, including social distancing restrictions. Cars honked horns and passengers waved American flags.

Social distancing efforts have saved many American lives, according to White House coronavirus response coordinator Deborah Birx, who on Saturday cited data showing the US has a lower per capita death rate than multiple European countries. She attributed that to "the amazing work of the American people to really adhere to social distancing".

The protests on Saturday followed rallies held on Friday in the state capitals of Michigan, Minnesota and Virginia.

Trump said on April 16 that he was leaving it up to governors to decide when and how to reopen their states, but the next day he openly encouraged protesters in those three states with rapid-fire tweets: "LIBERATE MINNESOTA!" Trump wrote, followed by "LIBERATE MICHIGAN!" and then "LIBERATE VIRGINIA, and save your great 2nd Amendment. It is under siege!"

Democratic governors run the states and all are seen as important for Trump in the coming presidential election.