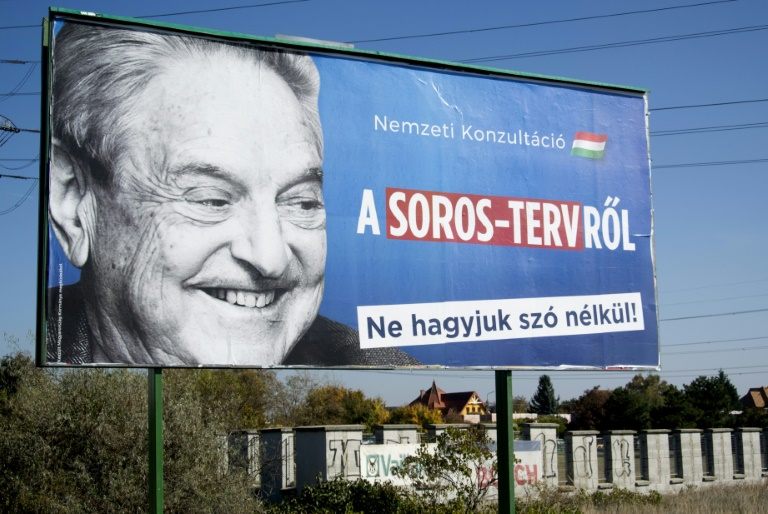 Hungary has led several major anti-Soros campaigns warning against the US billionaire's alleged plan to flood Europe with millions of migrants.(Photo: AFP)

The foundation run by US-Hungarian billionaire George Soros said Tuesday it was closing its operations in Hungary and relocating to Germany in response to the "repressive" policies of Viktor Orban's government.

"Faced with an increasingly repressive political and legal environment in Hungary, the Open Society Foundations (OSF) are moving their Budapest-based international operations and staff to the German capital, Berlin," the network said in a statement.

The 54-year-old premier, reelected for a third consecutive term last month, has long accused Soros of orchestrating immigration into Europe.

The proposals include a special tax on such NGOs, secret service surveillance of their staff, and a ban on any individuals deemed to be involved in "illegal immigration" from Hungary and its border zones.

Rights groups in Hungary and abroad have denounced the proposals as a way of cracking down on groups critical of the government.

"It has become impossible to protect the security of our operations and our staff in Hungary from arbitrary government interference," said Patrick Gaspard, OSF president in Tuesday's statement.

Orban, who won by a landslide in the April 8 election, on Monday said the "Stop Soros" package would be one of the first bills tabled by the new government in the coming weeks.

The theme of thwarting Soros's alleged efforts to encourage immigration dominated the election campaign during which Orban said some 2,000 "mercenaries" paid by Soros were working in Hungary.

The "Stop Soros" package was "one of the most important questions of the election, Hungarians voted for it … what we said we would do, we will do," Orban said Monday on a visit to Warsaw.

In recent years, the fiercely anti-immigration Orban has waged a series of large-scale taxpayer-funded information campaigns attacking Soros, accusing him of being a "public enemy" plotting to change the cultural fabric of Europe.

OSF's Gaspard said the Hungarian government had funnelled more than 100 million euros in public funds into its "hate campaign" in order to "spread lies about the Foundations and their partners," he said.

"The government of Hungary has denigrated and misrepresented our work and repressed civil society for the sake of political gain, using tactics unprecedented in the history of the European Union," he said.

OSF said more than 100 OSF staff in Budapest would be affected by the move to Berlin, around 60 percent of whom are Hungarian nationals.

Soros launched his first foundation in Hungary in 1984, using it to promote freedom of expression during the last years of Communism, the OSF said.

The prestigious Soros-founded Central European University (CEU) is also waging a battle against Orban after a higher education law was passed last year that it says threatens its survival in Hungary.