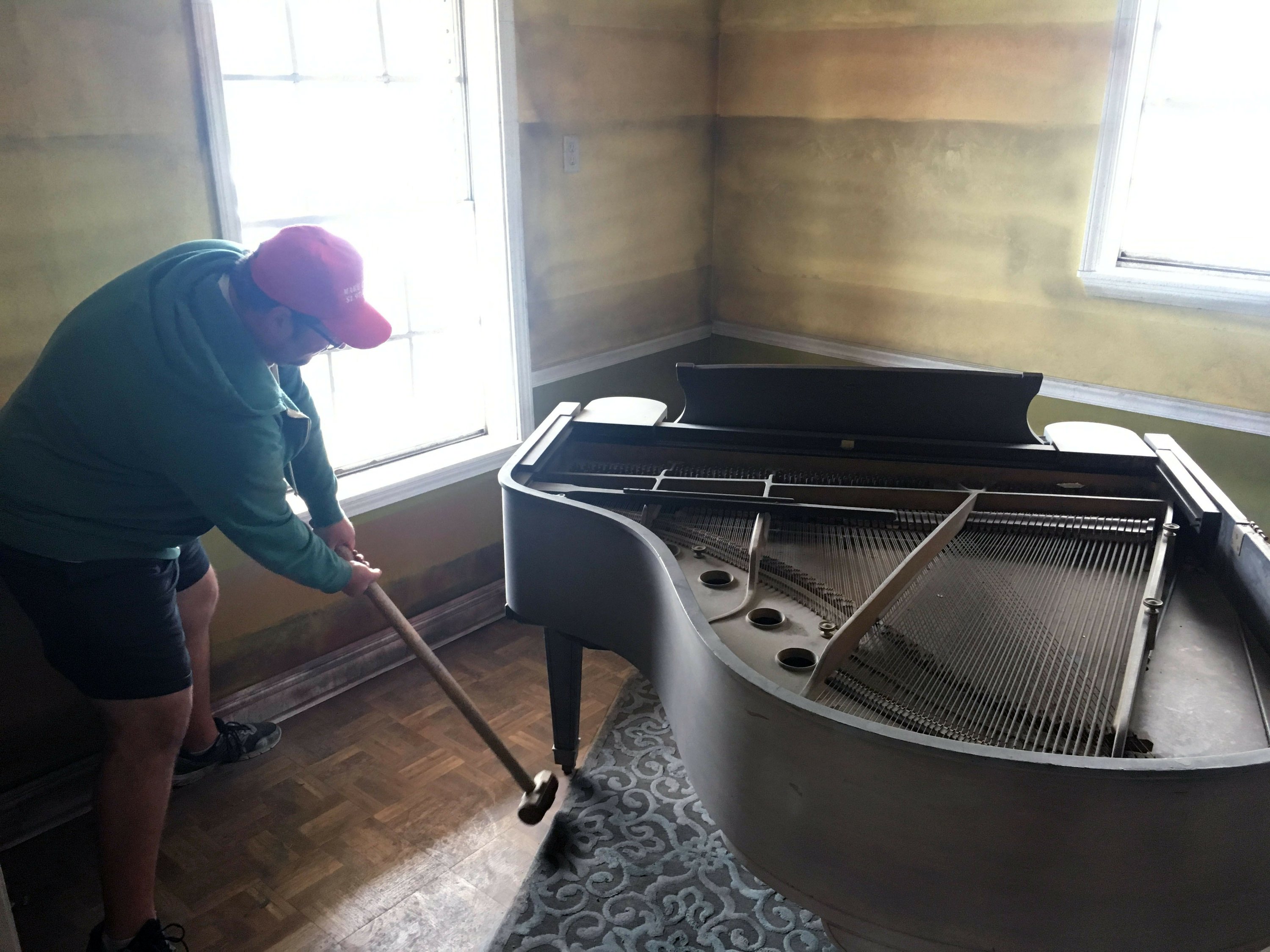 In this Feb. 26, 2019 photo, artist Aaron Angelo takes a sledgehammer to the leg of a baby grand piano in a house where two rooms are being transformed to look as they might have looked once floodwaters receded following Hurricane Katrina in New Orleans. (Photo: AP)

Patches of black mold on the ceiling. Water marks on the dingy walls. Toys, furniture and a baby grand piano tossed about and covered in a gray muck.

The busted floodwall behind the long-abandoned house in New Orleans’ Gentilly neighborhood was mended over a decade ago but the house looks, again, as though head-high floodwaters had only just receded.

It’s just an illusion, however, created by volunteers and theater artists who’ve turned two rooms in the house next to the London Avenue Canal into a life-sized diorama and the city’s latest monument to the disaster that struck on Aug. 29, 2005, when levees and floodwalls failed against the storm surge of Hurricane Katrina and 80 percent of New Orleans flooded.

A project of the donor-funded nonprofit group Levees.org, the Flooded House Museum is unique among the city’s monuments to Katrina’s destruction. There are markers at various sites, including some of the places where floodwalls gave way. But there’s nothing like this re-creation by artists Aaron Angelo and Ken Conner. They were tasked with depicting what homeowners would have found once they were allowed back into the area in the months after the storm hit, once the water had receded and roads were cleared of debris.

They used donated materials — furniture, art, household bric-a-brac — while drawing on research and memories as they painstakingly conjured a disaster scene, taking care to accurately depict how the watermarks formed on the walls as the putrid water dropped in stutter-step stages over the days and weeks following the storm.

“The water was not clean water,” Conner said one recent morning as he and Angelo rushed to complete the project, which will be formally unveiled Saturday. “It was salty water with a variety of contaminants. So each layer took on different looks.”

He was working around a piano that sat akimbo in the middle of the floor. Angelo had earlier re-created nature’s force by taking a sledgehammer to one of its legs.

This was a sort of Act II for the project. The rooms were first unveiled in August as a portrayal of the way they might have looked on Aug. 28, 2005 — art hanging neatly on freshly painted walls, toys on the throw rugs and a newspaper on the coffee table with an ominous headline: “KATRINA TAKES AIM.”

“Anytime you see devastation on a mass scale in world history, we always try to preserve one of the bad elements of it to illustrate to future generations what happened,” said Angelo, who not only donated effort but also some toys his 6-year-old daughter had outgrown. “And, so, this place, the more I’ve spent time with it, the more I realize how dynamic of a story it is.”

The finished product, which visitors will be able to view through the front windows of the house, will be a permanent installation. And it may be expanded to other parts of the house, which, now, is mostly gutted.

Levees.org was founded soon after the storm by Sandy Rosenthal and her then-teenage son to educate the public about the causes of the catastrophe — chiefly the failures of US Army Corps of Engineers flood walls that gave way in numerous locations.

“It was not a shining moment for American civil engineering, specifically the Army Corps of Engineers,” Rosenthal said during a recent visit to the house.

And the stretch of road paralleling the floodwall is not yet a shining example of New Orleans’ strong recovery. The area is still pocked with blight. It’s off the usual paths taken by tourists, although tour buses do make stops there and Rosenthal is hoping it becomes more of a tourist draw. Levees.org established a small park next to the house, with a flower garden and a covered walkway lined with panels of photos and texts explaining the history of the storm.

Darlene Shortell, a tourist from Nova Scotia, visited the site while work on the exhibit was finishing up. She said it was important to see some of the devastated areas during her visit.

“Like any disaster, if we don’t remember, then it could happen again,” she said. “If we remember, then we can maybe prevent it or get through it a little better the next time.”

Gentilly resident Sabrina Harris, whose home flooded in 2005, welcomes the exhibit as an educational tool for those who are unfamiliar with the story of Katrina, although the re-creation falls short of the reality.

“It is a good representation, but, when you actually saw the mold, the smell as you entered the city is something I’ll never forget.”