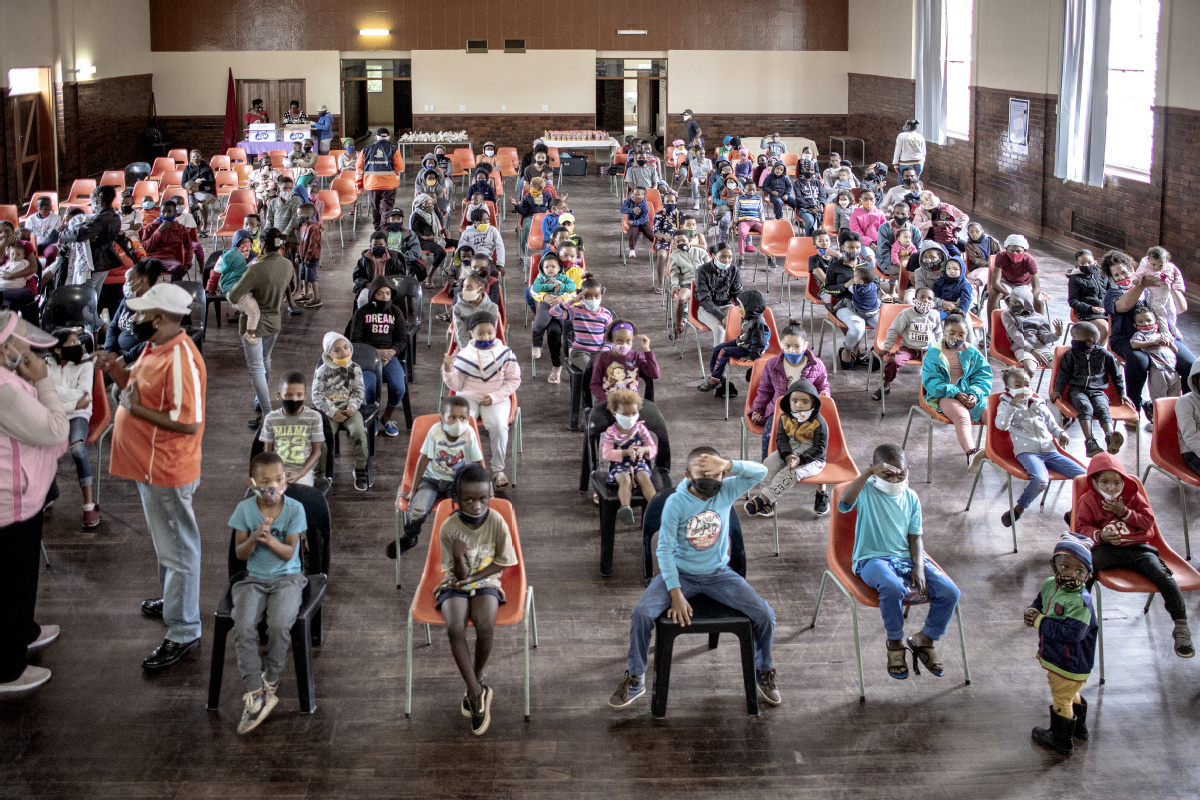 Children wait for handouts of food and other necessities at Coronationville Secondary School in Johannesburg, South Africa, on Wednesday. (Photo: AFP)

JOHANNESBURG－South Africa has logged its millionth case of COVID-19, with that unwanted distinction coming a day before South Korea on Monday became the latest country to detect a fast-spreading variant of the coronavirus.

The developments on two continents illustrate the scale of the challenge in turning back a pandemic that shows no signs of letting up.

South Africa logged the infections milestone on Sunday, with 1,004,413 people having contracted the virus in Africa's worst-hit country.

Mkhize said that, over the latest 24-hour period, there were 9,502 new confirmed cases, with 214 deaths. The nation's death toll from the virus rose to 26,735. Over 6 million tests have been conducted.

Mkhize appealed to citizens to play their role in curbing COVID-19.

"We must adhere to non-pharmaceutical interventions to prevent the further spread of the virus," he said.

By Monday, the world had more than 80.8 million confirmed cases with more than 1.76 million deaths, according to Johns Hopkins University in the United States.

South Korea's health authorities, in announcing the country's first detected cases of the more transmissible COVID-19 variant, said the infections were found in arrivals from Britain.

The Korea Disease Control and Prevention Agency said in a statement that three South Koreans who had stayed in London and arrived in South Korea on Dec 22 tested positive for the new strain. The three were confirmed with the virus when they took tests after arrival, and have been under quarantine.

Four other South Koreans, whose returns from Britain covered two dates, Nov 8 and Dec 13, tested positive. Investigations were carried out into whether they picked up the variant of the virus.

The new strain, first detected in Britain, is known to be up to 70 percent more transmissible than the old one. South Korea has suspended all flights from Britain until Thursday.

For the latest 24-hour period, the country reported 808 more cases of COVID-19, raising the total number of infections to 57,680. The daily caseload stayed below 1,000 for two-days, with fewer tests having been done over the weekend.

The new virus variant has also been detected in two people who went to Norway from Britain, the Norwegian Institute of Public Health said on Sunday. The travelers, who were not identified, went to Norway earlier in December and health workers will follow up with their close contacts, it said.

Norway imposed travel restrictions this month on passengers from Britain amid concerns over the variant.

In Israel, citizens on Sunday entered the country's third nationwide lockdown as it gears up for a vaccination drive.

The restrictions will last at least two weeks, pending a final decision by the cabinet.

From 5 pm, all people are required to stay within 1 kilometer of their homes, except for commuting to workplaces that have been defined as essential, seeking medical care, attending legal proceedings, and exercising. Restaurants and shops have been closed, except for deliveries.

Unlike in the two previous lockdowns, kindergartens, schools for children under six, as well as secondary schools for grades 11 and 12, remain open.

The Israeli health ministry reported on Sunday morning a total of 400,099 infections and 3,222 deaths.

In Asia's worst-hit country, the COVID-19 tally rose to 10,207,871 in India on Monday, as 20,021 new cases were registered from the previous day, federal health ministry figures show.