South Africa's retail industry is feeling the pain from the coronavirus pandemic on two fronts -- store closures during lockdown and the sharply reduced purchasing power of households. 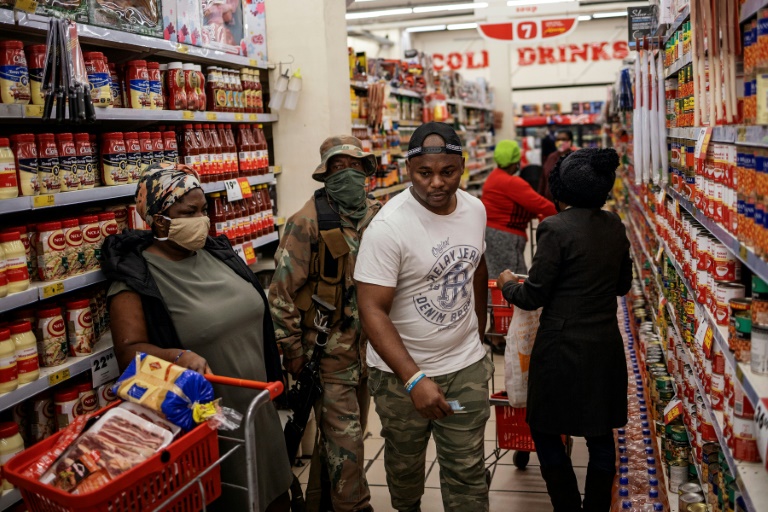 South Africa went into strict lockdown at the end of March, with people only allowed to shop for essential items such as food, medicine and winter clothing. (Photo: AFP)

South Africa, the continent's most industrialised economy, went into strict lockdown at the end of March, with people only allowed to shop for essential items such as food, medicine and winter clothing.

Restrictions have been gradually rolled back since June. Alcohol and tobacco sales were allowed to resume this week and, generally, business is now almost back to normal.

Nevertheless, retailers are reeling from the economic effects of months of suffocating restrictions.

South Africa's Massmart -- majority-owned by US giant Walmart -- said on Thursday that it expected half-year losses to widen by as much as 42 percent as a result of the nationwide lockdown.

Massmart was already in dire straits before the pandemic and closed a 23-store electronic retail chain and 11 wholesale outlets shortly before the lockdown came into effect.

"Retailers that were already taking the strain" in an economy that was contracting even before the outbreak have found themselves vulnerable to the virus fallout, said Casperus Treurnicht, portfolio manager at Gryphon Asset Management.

South African shoppers have had to get used to wearing a mask, having their temperature taken at the door and using hand sanitisers.

And even as the economy reopens, shops will continue to enforce such measures in order to protect both staff and customers.

"Retailers who cannot signal that it's safe to shop in their locations are probably going to lose, and perhaps those are the ones more likely to be plagued by the question: 'Can we survive?'," Qongqo told AFP.

But the measures come at a cost.

Since the start of lockdown, South Africa's second-largest supermarket chain Pick n Pay has had to budget for protective equipment, a voluntary severance programme taken by 1,400 of its 9,000 employees and bonuses for front-line workers.

The company, which has a market capitalisation of over $1.2 billion, warned that its profits in the first half could be halved as a result of the fallout from coronavirus.

Faced with rising unemployment and uncertainty about the future, South African households are tightening their purse strings. And that, in turn, makes it difficult for retailers to draw in customers.

The central bank has slashed lending rates by 300 basis points since January to boost spending, but economists fear it will not be enough.

"The consumer will be trading down and the operator with the best price and ease of buying will come out on top," said Treurnicht of Gryphon Asset Management.

On the other hand, digital services and e-commerce are booming.

South Africa's largest online shopping platform Takealot, which had estimated sales of around one billion rand ($57.9 million) per month between January and March, recently reported a surge in demand.

"South Africans have embraced online shopping in a more natural fashion and this trend is looking likely to continue," said Matthew Leighton, spokesman for OneDayOnly, another digital sales platform.

However, analyst Qongqo said retailers should not lose sight of their target income group to avoid "throwing away money" on digital.