Letting out exhilarated howls in the light of a full moon, young cyclists barrel down a steep hill on their "fixie" bikes, sound bars blaring out music, in South Africa's Soweto township. 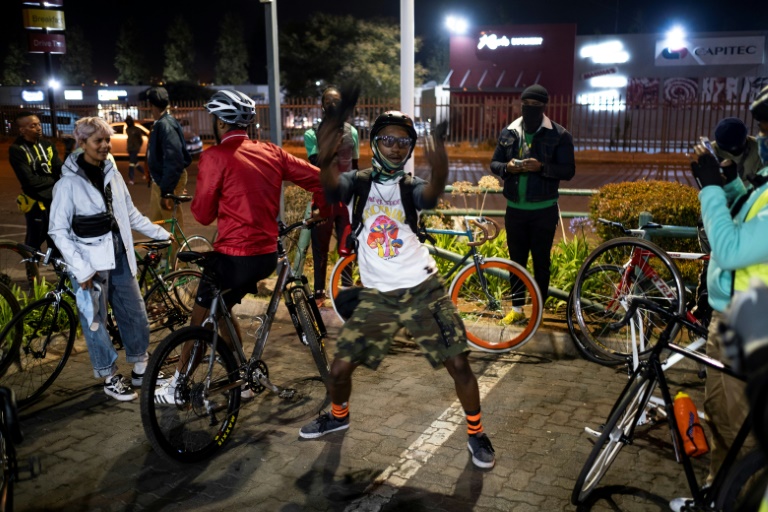 The cycling get-togethers are 'for fun, for creating a community and engaging with other like-minded people', says enthusiast Tiyiselane Mashele. (Photo: AFP)

They are the Biking Bandits, a group that emerged in March, about a year into national coronavirus restrictions.

When it hit them that the tough curbs were far from over, auto technician Tebogo Galagala and his friend Tiyiselane Mashele started cycling together in the evening, just for fun.

They formed the Biking Bandits, whose nighttime jaunts have since infiltrated urban hip culture, attracting scores of young black riders across the township famous as the birthplace of the anti-apartheid movement.

"Urban cycling in Soweto and also in Johannesburg is growing quite numerously," said Galagala, 26, excitedly preparing his vintage one-speed bike for the urban night ride with his "crew".

"We are growing numbers. The culture is growing," Galagala enthused.

Under apartheid, cycling was purely utilitarian, a way to commute to work -- the journey from Soweto to central Johannesburg covers 25 kilometres (15 miles).

But today, to 34-year-old Mashele and crew it's for "leisure, for fun, for creating a community and engaging with other like-minded people".

They get together twice a month for the 12-kilometre (seven-mile) Homies Night Ride -- using the slang word "homies" to suggest that all cycling skill levels are welcome.

Commuter minibus drivers, notorious for their reckless driving habits, benevolently honk at the cyclists, gawking at their multi-coloured bikes.

But bicycles do not come cheap for a lot of young people, many of whom are unemployed.

Yet the demand for fixie bikes -- vintage road bikes with their gears removed, a boon for urban cycling -- has surged, according to artisanal constructor Kutlwano Malefane.

He charges as much as $400 for a basic model, and says demand has doubled since before the pandemic.

The high price tag does not deter the night riders, many of whom save for months to be able to buy one.

The riders relish the chance to "claim the space (and) change people's mindsets around us black people cycling," said Mashele, who works for a government roads agency.

"It's not something you see every day," he said, suggesting that cycling has long been considered a sport for the wealthy -- read white.

"For me it's the lifestyle, the fashion," said Tshepo Moyo, 27, wearing skinny jeans, a cosy jersey and a beanie while proudly showing off his bike with custom zebra tape on the bars.

Mashele chimed in: "We're not wearing spandex or anything, we wear our jeans and sneakers."

For 22-year-old club member Thapelo Makama, who grew up in the township, riding bicycles has been a lifelong ambition.

"As a kid you used to always want a bike," he chuckled, describing how bystanders often cheer the cyclists on as they go on their night rides.