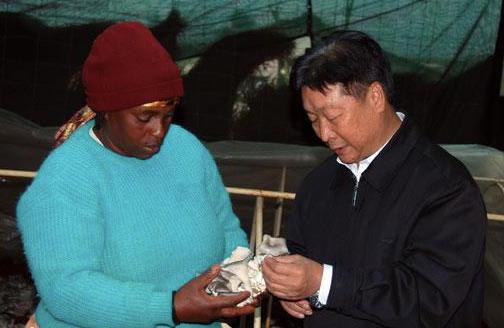 Johannesburg (People’s Daily) – China recently held its XVI International Seminar on the Development of Juncao Industry, where officials and experts from more than a dozen countries, including South Africa, praised the agricultural advancements brought on by the use of Juncao technology.

Juncao is a type of grass from China – the word comes from Jun for fungi and Cao for grass. The Juncao Technology Project was invented in the 1980s by Lin Zhanxi, a professor at China's Fujian Agriculture and Forestry University.

The project was created as a way to grow edible and medicinal fungi by using grass instead of trees or woods. It is linked to issues that are important to developing countries, including the eradication of poverty, reduction of hunger, use of renewable energy, promotion of employment, and response to climate change.

Within 100 days or so of being planted, Juncao can develop its own root system in deserts and can be used to improve soil quality to grow more crops. According to experts, Juncao can help address climate change and is a source of clean energy. Power generated from burning Juncao grass grown on one hectare of land equals the same amount of energy from burning 50 tons of coal. The research shows that Juncao also produces fewer emissions than coal.

South Africa has been using Juncao technology since 2004, when China transferred the technology over to the country after signing a $240,000 contract.

KwaZulu-Natal, which is one of the poorest provinces in South Africa with an 80 percent unemployment rate, is also the location for the Juncao technology demonstration and training base.

For years, Juncao scientists have overcome countless technological difficulties to ensure that the technology takes hold in KwaZulu-Natal and produces real-world benefits.

Thanks to the help of the Juncao technology, employment rates are rising in KwaZulu-Natal and the economy is improving.

Paul En Kubo, the chairman of the Mushroom Cultivation Association of Natal, said he is thankful for all of China’s help with this project.

Matjila said Juncao technology is a prime example of South-South Cooperation and can play a major role in helping developing countries achieve their sustainable development goals.