South African President Cyril Ramaphosa described the first South African Investment Conference as a success on Friday after businesses pledged to invest 290 billion rand ($20 billion) into the economy in the next five years. 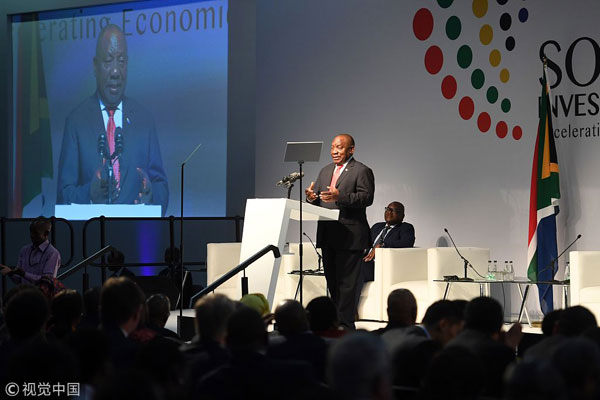 Giving his final remarks at the conference in Johannesburg, Ramaphosa said the interest which local and international investors have shown in the conference was overwhelming.

"These are just some examples of the investments that have been announced today are worth 290 billion rand," he said.

Ramaphosa said that the amount of money excludes pledges made by various countries over the past few months.

"These investments are in addition to pledges of over 400 billion rand ($27 billion) that we have received from several governments over the last few months. We have already begun effort to turn pledges into firm commitments," the president said.

Since his election early this year, Ramaphosa has been on a drive to attract investors into the country. His government's goal is to raise over $100 billion of investment into the country's economy over the next five years.

Ramaphosa said that there was so much that investors could benefit from the country's diverse economy.

"In this conference, we have focused on re-engaging with the business community to make our investment case. We have reminded our local and global community of the compelling reasons to direct resources into this economy," he added.

Ramaphosa said that the government was yet to decide whether the investment conference would become annual or biennial.