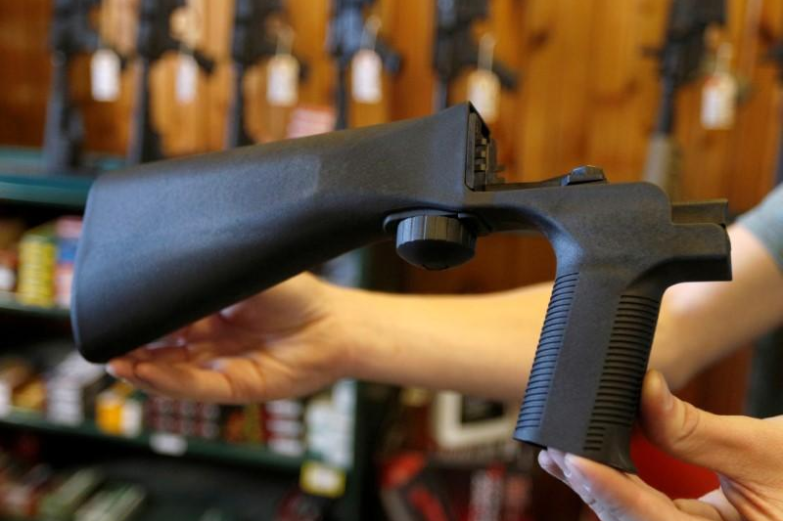 An example of a bump stock that attaches to a semi-automatic rifle to increase the firing rate is seen at Good Guys Gun Shop in Orem, Utah, US on October 4, 2017. Photo: REUTERS/George Frey

South Carolina’s capital on Tuesday could become the first US city to ban the use of bump stocks, a gun accessory that has drawn national scrutiny after being found among the Las Vegas mass shooter’s arsenal of weapons in October.

Columbia Mayor Steve Benjamin said the city council was expected in a vote on Tuesday night to approve an ordinance barring the devices, which allow semiautomatic rifles to fire hundreds of rounds a minute like fully automatic machine guns.

“One of the common refrains that you hear whether it was in Texas or Vegas or Sandy Hook is that a good guy with a gun could have stopped the carnage,” Benjamin, a Democrat, said in a phone interview on Monday. “It’s time for the good guys with guns to begin to pass some really good policy.”

Authorities said Las Vegas shooter Stephen Paddock had 12 rifles outfitted with bump stocks in the hotel room where he launched his attack on an outdoor concert, killing 58 people and wounding hundreds in the deadliest mass shooting in modern US history.

Since the shooting, several states and cities have proposedmeasures outlawing or restricting the attachments, and the US Justice Department said earlier this month it was considering a ban on certain bump stocks.

California and New York already ban them, according to the National Conference of State Legislatures. Five other states prohibit devices that allow automatic fire, and seven states and the District of Columbia have assault weapons bans that could include bump stocks, the organization said.

“We are not aware of any cities that have passed ordinances banning bump stocks,” said Tom Martin, a spokesman for the National League of Cities in Washington.

In Columbia, four of the council’s six members approved the city’s proposed ordinance on a first reading earlier this month.

The measure also would ban the use of other gun attachments that allow rifles to fire faster. Owners would be required to keep them stored separately from any weapon.

The mayor, who has a background in law enforcement and said he owns guns, said the measure had drawn support from local police and council members who support the Second Amendment to the US Constitution protecting gun ownership rights.