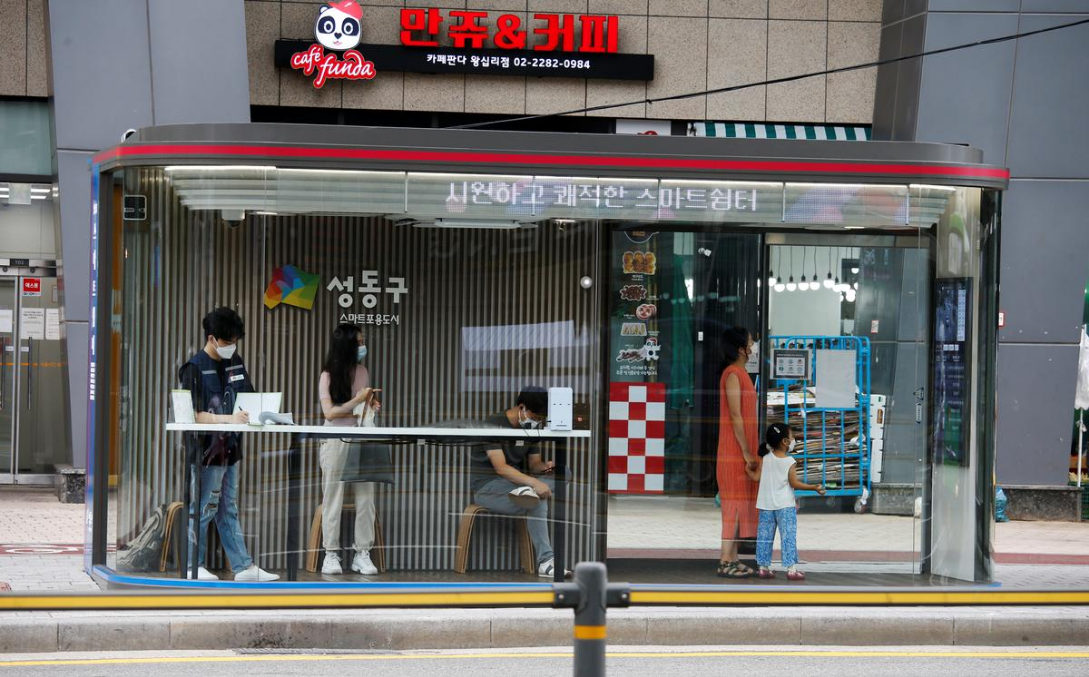 People wait for the bus inside a glass covered stop in which a thermal imaging camera, UV sterilizer, air conditioner, CCTV and digital signage are set, to avoid the spread of COVID-19 in Seoul, South Korea, August 14, 2020. (Photo: Reuters)

South Korea accused the leader of a religious sect on Sunday of violating self-isolation rules and obstructing investigations into the country's biggest coronavirus outbreak in five months.

South Korea has reported 279 newly confirmed cases of the coronavirus, as fears grow about a massive outbreak in the greater capital region.

The capital posted a record 146 new cases, out of which 107 were linked to Sarang Jeil Church led by reverend Jun Kwang-hoon, a controversial pastor.

The Health Ministry said it will file a complaint against Jun later on Sunday, accusing him of violating self-isolation rules by participating in a rally on Saturday and "obstructing" epidemiological investigation by failing to submit a full list of church members for testing and tracing.

The surge in COVID-19 cases prompted authorities on Sunday to reimpose tighter social distancing curbs, and President Moon Jae-in warned of "stern and strong measures" against "some churches," calling their behavior an "unforgivable act that threatens public lives."

More than 10,000 people went on protests in downtown Seoul on Saturday, one of which was led by a far-right group and participated by pastor Jun Kwang-hoon and other members of Sarang Jeil Church in Seoul.

According to Yonhap's report, Jun failed to host an anti-government rally as planned after the city government banned large gatherings out of COVID-19 concerns. He, however, participated in another rally leading his followers from across the country while failing to take appropriate quarantine measures, according to officials.

The number of new cases reported on Sunday was the highest since 367 were reported on March 8, when the country was concentrating public health tools and personnel nationwide to combat an outbreak in the less populated southern region.

The figures released by the Korea Centers for Disease Control and Prevention (KCDC) Sunday brought the national caseload to 15,318, including 305 deaths.

Another Christian sect, Shincheonji Church of Jesus, was at the center of the country's largest outbreak of COVID-19 infections in February. More than 5,000 of the church's member were infected by COVID-19, which makes up 36 percent of South Korea's total cases.

The founder and leader of the church, Lee Man-hee was arrested on August 1, accused of hiding information about the group's members.