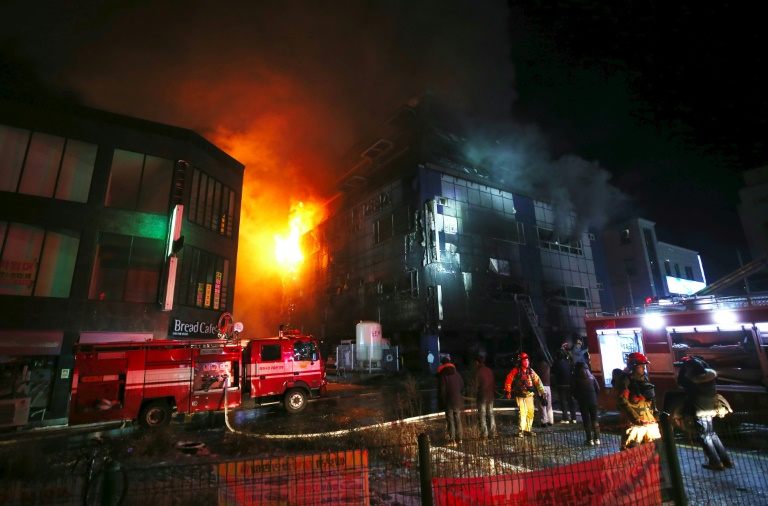 Flammable materials on the outside of a South Korean building fuelled a major blaze that killed 29 people, experts said Friday, evoking comparisons with the Grenfell Tower disaster in London.

The fire engulfed an eight-storey tower in the southern city of Jecheon, killing 29 people and injuring 29 more. 20 of the dead were found at a female sauna and others elsewhere in the building, which also houses a fitness centre and restaurants.

The husband of one of the victims received a phone call from his wife, pleading for help.

"My wife was screaming on the phone, asking for help, but she was coughing badly because of the smoke," he told the Yonhap news agency.

The man, surnamed Yun, immediately alerted the emergency services. "Then I called her back, but she did not answer this time," he said.

Street surveillance video footage showed orange flames and black smoke billowing from the ceiling of a ground floor car park underneath the stilted building, which stood on pillars.

The fire spread quickly upwards along the outside walls of the tower, which contained cheap and highly flammable finishing materials.

"There were three or four exploding sounds and I saw the fire on the ground floor quickly jump upwards along the outside walls," said one eyewitness.

It reportedly took only seven minutes for the entire building to be engulfed in smoke and flames.

Barber Kim Jong-Su, 64, was working at the men's sauna -- one floor above the women's facility -- when the fire alarm went off.

"I saw flames and smoke outside the windows," he said.

He stayed at the premises for around five minutes, helping a dozen customers to safety down an emergency staircase -- many of them in their underwear -- before he was hospitalised with smoke inhalation.

South Korean President Moon Jae-In visited the scene Friday to receive a report on the accident and rescue efforts, his office said.

Engineering Professor Chung Sang-Man at Kongju University said the tower had cladding materials made of a cement and foam sandwich, which are widely used for insulation but prone to spreading fire.

"Inflammable finishing materials have been a great source of problems in major blazes," he said, citing the Grenfell Tower inferno in June that killed 71 people, among other disasters.

The London fire started with a faulty refrigerator on the fourth floor of the building owned by the local authority, but rapidly spread up the 24-storey tower, which had new cladding on the outside.

In the wake of the disaster, hundreds of similar buildings across Britain were subjected to safety checks, and some residents were evacuated as a precaution.

The painstaking process to identify all the remains took months and anger is still simmering among the survivors, with most awaiting permanent housing and voicing scepticism about an official inquiry.

On Friday experts said stilted buildings such as the Jecheon fitness centre are especially vulnerable to fires that begin on the ground floor as staircases act like smoke stacks, making flames spread upwards quickly.

Vehicles in the car park under the building also ignited, fuelling the blaze.

"There seem to have been a lot of toxic gases produced when the cars burned," said Jecheon fire chief Lee Sang-min.

"The locker rooms inside where you put your clothes are structured almost like a maze," he added.

The fumes and flames were sucked rapidly upstairs to reach the women's sauna on the first floor, suffocating victims who had no escape with passageways blocked.

"The female sauna has a large toughened glass wall and no windows," Lee told journalists.

He also complained of illegally parked cars in the roads around the site, which hampered fire engines.